G.K. Chesterton & The Impotence of Nightmares

“It is not always wrong even to go, like Dante, to the brink of the lowest promontory and look down at hell. It is when you look up at hell that a serious miscalculation has probably been made.”

It was simply an essay written for the Daily News. It really could have been routine. Yet nothing G.K. Chesterton ever wrote was “routine”. This essay was terrifying. It was called, “The Nightmare”. It was dusk and Chesterton found himself reading in the garden behind his house. “By the last light that died on the lawn” he strained to review a poem about cruel and ancient gods of Babylon and Egypt. A mood of decadence and evil pervaded the reading and Chesterton could nearly smell the wisp of sulfur intent on snuffing out the goodness garden air can bring. And as “the bushes at the back of my garden began to whisper like conspirators; and then to wave like wild hands in signal”, darkness grows. Chesterton began to muse,

“I can fancy in such a stormy twilight some such smell of death and fear. The ruined sunset really looks like one of [the ancient god’s] ruined temples: a shattered heap of gold and green marble. A black flapping thing detaches itself from one of the sombre trees and flutters to another. I know not if it is owl or flittermouse; I could fancy it was a black cherub, an infernal cherub of darkness, not with the wings of a bird and the head of a baby, but with the head of a goblin and the wings of a bat. I think, if there were light enough, I could sit here and write some very creditable creepy tale, about how I went up the crooked road beyond the church and met Something—say a dog, a dog with one eye. Then I should meet a horse, perhaps, a horse without a rider, the horse also would have one eye. Then the inhuman silence would be broken; I should meet a man (need I say, a one-eyed man?) who would ask me the way to my own house. Or perhaps tell me that it was burnt to the ground. I could tell a very cosy little tale along some such lines. Or I might dream of climbing for ever the tall dark trees above me. They are so tall that I feel as if I should find at their tops the nests of the angels; but in this mood they would be dark and dreadful angels; angels of death.”

Blurred figures evasively flitting from tree to blackened tree. A disfigured cherub of evil. Macabre contortions of everyday encounters. The expectation of angels with the jarring realization of Satanic ghouls. It is the stuff of Poe, King and Loveraft. It is the substance of nightmares. Wicked, fearsome nightmares.

And yet it is precisely at this moment that G.K. Chesterton laughs. Nightmares (or the mood they create) are nothing. Or, in Chesterton’s words, “bosh”.

“That one-eyed universe, with its one-eyed men and beasts, was only created with one universal wink.”

What exactly does that mean? It means that the anxious frivolity we experience from the spine-tingling, bone-chilling, unsettling yarns is just that – frivolous. It is a plaything that should never be treated as more than a plaything. Chesterton intones,

Evil, let it never be mistaken, is real. But it is inferior. It is parasitic. It is incomplete. The moment we take counsel from it, become overwhelmed by it, or put it on an equal footing with the Good of God, it will have become something entirely more dangerous. It becomes an idol. Chesterton reasons,

“Man may behold what ugliness he likes if he is sure that he will not worship it; but there are some so weak that they will worship a thing only because it is ugly. These must be chained to the beautiful. It is not always wrong even to go, like Dante, to the brink of the lowest promontory and look down at hell. It is when you look up at hell that a serious miscalculation has probably been made.”

Understanding the narrative of our Christian Faith empowers us to understand, with full confidence, that while evil is real, present and active in this world, it is ultimately defeated. To recognize that the horrors of the gulags, concentration camps and killing fields, the destruction of abuse, neglect and betrayal, and the pain of disease, famine and disaster are not the last words. Not by a long shot. All is rectified and made new in the saving blood of Christ. This faith properly subordinates and relegates evil to its proper position. A second-rate power. An empty threat. A plaything. An impotent nightmare.

“Therefore I see no wrong in riding with the Nightmare to-night; she whinnies to me from the rocking tree-tops and the roaring wind; I will catch her and ride her through the awful air…We will rise to that mad infinite where there is neither up nor down, the high topsy-turveydom of the heavens. I will answer the call of chaos and old night. I will ride on the Nightmare; but she shall not ride on me.” 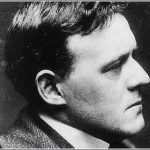 January 16, 2014 Not Missing the Sacramental Journey: Hilaire Belloc's "The Four Men"
Recent Comments
0 | Leave a Comment
"Nice article. But true as it may have been then, it is today a little ..."
DWSWesVirginny The Conversion of Evelyn Waugh & ..."
"Thank you. I find this article a good one to keep in mind tha argument ..."
Lady Bird What Pope Benedict XVI & G.K. ..."
"Gotta wonder how much of his idealization of children would have survived if he had ..."
The Sanity Inspectorن​ All of Chesterton’s Children
"I have been reading "The Four Men" every year at this time, late October. This ..."
P. O'Brien Not Missing the Sacramental Journey: Hilaire ..."
Browse Our Archives
Related posts from A Catholic Thinker