In September, 2010, Pope Benedict XVI found himself standing in Westminster Hall, London before British representatives. The audience included the diplomatic corps, politicians, academics and business leaders. It was an extraordinary visit. The Vicar of Christ was openly invited and warmly hosted by an English monarch and society which, centuries before, had bitter enmity with the Church of Rome and persecuted its adherents. It was a true act of charitable reconciliation on both sides. And the bright lights of English society welcomed him warmly.

However, while the symbolism of the visit was profound, it was exceeded only by the message. In a brief address, Pope Benedict XVI lauded Britain’s common law tradition, checks and balances, and the dynamic tension erected between the rights and duties of citizens with respect to the state. These customs, the Pope would congratulate, have served as a proud model for legal systems worldwide. And yet he then offered a kind, yet chastening, word about St. Thomas More, the deeply Catholic lawyer, politician and scholar. More died a martyr at the hands of a King and system which demanded he perish unless he violate his own conscience.

It is in this anecdote regarding St. Thomas More that the Pope illustrated a larger point. A proud British system was juxtaposed with a humble, yet conscientious man. At first, the Pope reflected with admiration,

“Britain has emerged as a pluralist democracy which places great value on freedom of speech, freedom of political affiliation and respect for the rule of law, with a strong sense of the individual’s rights and duties, and of the equality of all citizens before the law. While couched in different language, Catholic social teaching has much in common with this approach, in its overriding concern to safeguard the unique dignity of every human person, created in the image and likeness of God, and in its emphasis on the duty of civil authority to foster the common good.”

And yet in spite of common values that can be found in British democracy (and other democracies) and Catholic social teaching, Pope Benedict XVI outlined the dissonance that exists,

“Each generation, as it seeks to advance the common good, must ask anew: what are the requirements that governments may reasonably impose upon citizens, and how far do they extend? By appeal to what authority can moral dilemmas be resolved? These questions take us directly to the ethical foundations of civil discourse. If the moral principles underpinning the democratic process are themselves determined by nothing more solid than social consensus, then the fragility of the process becomes all too evident – herein lies the real challenge for democracy.”

Where the state has, of late, become more sternly outspoken about issues such as abortion, gay marriage and the management of free expression, the individual may find himself in a less hospitable environment to exercise his conscience should he find himself in disagreement. Coinciding with this divergence between the state’s and a citizen’s prerogatives is a greater potential for suspicion and resentment. Oversimplified observations may protest that one entity operates cooly on the basis of “reason” while the other operates passionately on “conscience informed by religious revelation”. To lend some light, the Pope enters the fray – quite brilliantly. The Pope explains,

“The central question at issue, then, is this: where is the ethical foundation for political choices to be found? The Catholic tradition maintains that the objective norms governing right action are accessible to reason, prescinding from the content of revelation. According to this understanding, the role of religion in political debate is not so much to supply these norms, as if they could not be known by non-believers – still less to propose concrete political solutions, which would lie altogether outside the competence of religion – but rather to help purify and shed light upon the application of reason to the discovery of objective moral principles. This “corrective” role of religion vis-à-vis reason is not always welcomed, though, partly because distorted forms of religion, such as sectarianism and fundamentalism, can be seen to create serious social problems themselves. And in their turn, these distortions of religion arise when insufficient attention is given to the purifying and structuring role of reason within religion. It is a two-way process. Without the corrective supplied by religion, though, reason too can fall prey to distortions, as when it is manipulated by ideology, or applied in a partial way that fails to take full account of the dignity of the human person. Such misuse of reason, after all, was what gave rise to the slave trade in the first place and to many other social evils, not least the totalitarian ideologies of the twentieth century. This is why I would suggest that the world of reason and the world of faith – the world of secular rationality and the world of religious belief – need one another and should not be afraid to enter into a profound and ongoing dialogue, for the good of our civilization.”

Reason and revelation, logic and conscience inform and purify one another. If religion is tipped too far away from reason, we risk dangerous irrational fundamentalism. This was a message, sadly lost by most, in the Pope’s 2006 Regensburg address. Likewise, if reason is tipped too far away from religion, we risk brutal rationalism bled white of its respect for human dignity. This was the lesson of National Socialism and Communism. The latter imbalance is what most concerned the Pope.

“Religion, in other words, is not a problem for legislators to solve, but a vital contributor to the national conversation. In this light, I cannot but voice my concern at the increasing marginalization of religion, particularly of Christianity, that is taking place in some quarters, even in nations which place a great emphasis on tolerance. There are those who would advocate that the voice of religion be silenced, or at least relegated to the purely private sphere. There are those who argue that the public celebration of festivals such as Christmas should be discouraged, in the questionable belief that it might somehow offend those of other religions or none. And there are those who argue – paradoxically with the intention of eliminating discrimination – that Christians in public roles should be required at times to act against their conscience. These are worrying signs of a failure to appreciate not only the rights of believers to freedom of conscience and freedom of religion, but also the legitimate role of religion in the public square. I would invite all of you, therefore, within your respective spheres of influence, to seek ways of promoting and encouraging dialogue between faith and reason at every level of national life. Your readiness to do so is already implied in the unprecedented invitation extended to me today.”

That the Vicar of Christ, the Supreme Pontiff, the Heir to Peter would provide such an eloquent articulation of the indispensable interplay between faith and reason to the secular and sacred luminaries of British society should come as no surprise. After all, the Catholic Church has been saying this for years. It’s just that this Pope has been so remarkably good at it. One year on, after Benedict’s resignation, I miss him. I love Francis and I miss Benedict. And so he would conclude,

“The angels looking down on us from the magnificent ceiling of this ancient Hall remind us of the long tradition from which British Parliamentary democracy has evolved. They remind us that God is constantly watching over us to guide and protect us. And they summon us to acknowledge the vital contribution that religious belief has made and can continue to make to the life of the nation.”

February 24, 2014
"Living Within the Truth": Vaclav Havel & "The Power of the Powerless"
Next Post 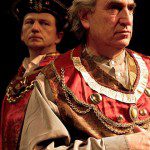 March 5, 2014 "Stripping for Lent": St. Thomas More & the Way of Sacrifice
Recent Comments
0 | Leave a Comment
"Thank you. I find this article a good one to keep in mind tha argument ..."
Lady Bird What Pope Benedict XVI & G.K. ..."
"Gotta wonder how much of his idealization of children would have survived if he had ..."
The Sanity Inspectorن​ All of Chesterton’s Children
"I have been reading "The Four Men" every year at this time, late October. This ..."
P. O'Brien Not Missing the Sacramental Journey: Hilaire ..."
"Regular updates to the countdown to the Day of the Lord by the sign of ..."
Edward Palamar “Something Absolutely Modern” – The Insincere ..."
Browse Our Archives
Related posts from A Catholic Thinker