The Sin & Silence of Good Friday

Years ago, I had a vision. No, it wasn’t a vision like St. Teresa’s ecstasy or St. Joan of Arc’s calling. I don’t presume to be a saint. But it was an unmistakably compelling image of Christ on Good Friday. And I just couldn’t shake it.

It begins in the cool, sharp silence of space overlooking Earth. Noiseless. Peaceful. But deeply cold. In short order would begin the descent. As Earth’s outer atmosphere approaches, there is the faintest sound – the most indistinct whisper (or whispers). The voices, at first, seem harmless and inaudible, but they don’t remain that way. They grow louder, more clear, more insistent. And now, unmistakably, one can hear. The words are harsh and merciless. Evil. Like knives.

Listen. This is what they said.

It is nearly deafening now. As trees, rocks and hills come into view, the Satanic howl drives any hearers to a point of madness. Cackling, evil glee luxuriates as we fall further and further. Darkness is all around.

Being pressed to the limits of sanity, the ruthless whisper-screams bite and claw their way toward an emerging solitary figure. A man. He is upright, but not of his own accord. Approaching him further, we see him for what he is: Bloody. Bruised. Battered. Broken. Affixed to a rough-hewn cross. And as the murderous voices and words assault and accost, impale and eviscerate him, the man perseveres. He musters residual strength, raises his head and offers One. Last. Gasp. 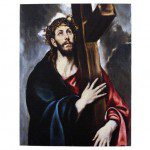 April 14, 2014
Holy Week: On Suffering, Friendship & the Indispensable Body of Christ
Next Post

April 24, 2014 St. John Paul II: The 20th Century's Greatest Dissident
Recent Comments
0 | Leave a Comment
"Thank you. I find this article a good one to keep in mind tha argument ..."
Lady Bird What Pope Benedict XVI & G.K. ..."
"Gotta wonder how much of his idealization of children would have survived if he had ..."
The Sanity Inspectorن​ All of Chesterton’s Children
"I have been reading "The Four Men" every year at this time, late October. This ..."
P. O'Brien Not Missing the Sacramental Journey: Hilaire ..."
"Regular updates to the countdown to the Day of the Lord by the sign of ..."
Edward Palamar “Something Absolutely Modern” – The Insincere ..."
Browse Our Archives
get the latest from
Catholic
Sign up for our newsletter
POPULAR AT PATHEOS Catholic
1

From Founding a Startup to Deloitte...
Through Catholic Lenses
Related posts from A Catholic Thinker