I, Thou & Adolf Hitler

“I have not come into this world to make men better, but to make use of their weaknesses.”

I had often sensed it. Yes I have. But Martin Buber plainly and expertly put it into words. While reading Emery de Gaal’s brilliant theological/philosophical biography of Pope Benedict XVI, The Theology of Pope Benedict XVI: The Christocentric Shift, I came across the reference to Buber’s 1923 influential work, I and Thou. I had never heard of it before. In it, Buber proposed a simple yet brilliant construct of human relationships. One form of relationship is characterized as “I and Thou” while another as “I and It”. Now before you start to nod off and suspect me of wandering into an arcane and pedantic dissertation on snoozy philosophy, please bear with me. This is pretty cool.

On the other hand, “I and It” is a relationship of utility. The “It” is a means to an end. The “object” in question is only valued in so far as it serves my needs after which it can be discarded. “It” is subordinate to my passions and goals and deserves little recognition because it is devoid of  inherent qualities. The “I and It” relationship is “efficient”, but often risks being so in a callous and steely way. It is a monologue. It is experiential. It is not based on dignity. One may argue that an “I and It” relationship with a hammer to drive in nails requires no more than an objectified, subordinating and experiential relationship between me and the hammer. I’ve got some nailing to do. The hammer helps me do it. End of story. True. But a relationship with another human being approached from the “I and It” perspective could be utterly devastating.

So…what does any of this have to do with Adolf Hitler?

Adolf Hitler epitomized the “I and It” relationship. Throughout his life, Hitler cynically used people to serve his own selfish ends. After squandering an orphan’s pension and familial inheritances and living in a homeless shelter, he would privately fulminate against the very Jewish patrons who would buy his painted postcards. After being courted to join the reactionary German Workers’ Party, Hitler would quickly use the party as his vehicle to rise in prominence, manipulate the membership and maneuver the party leader out of power. Ernst “Putzi” Hanfstaengl, an American supporter of Hitler’s who helped as a power broker, financier and confidante, was jettisoned when Hitler had gotten all that he needed from him. This list goes on to include former Chancellor von Papen who helped pave Hitler’s path to the Chancellorship, to Ernst Rohm, the leader of Hitler’s “brownshirt” paramilitary, who gave early muscle to Hitler’s movement, to the “Desert Fox” Erwin Rommel who scored unparalleled victories against the Allies in North Africa, to the entire German High Command who were generals of doubtful morality, but undoubted skill. All these and so many more ended up marginalized or murdered. All in the name of Adolf Hitler and his appetites.

But while each of these individuals served as one of Hitler’s “Its”, perhaps the most tragic “It” in Adolf Hitler’s “I and It” relationships, were the masses of people he victimized. The Jews, Catholics, Gypsies, homosexuals, mentally ill, physically “unfit” and politically suspect. By looking at these people as subhuman, undignified means to ends, he found it easy to imprison, enslave and exterminate them. But did Hitler have an “I and Thou” relationship with the rest of the “acceptable” German nation? I would argue, no. The masses of German people may have “made the cut” in terms of their blood and nationality, but they were still perceived by Hitler as valuable insofar as they were means to his ends. And what was his ultimate end? Absolute, uncontested power.

But what of his rhetoric for the German Volk? His advocacy for “racial hygiene”? Or the emotional ties he had to his mother, Eva Braun, his half-niece and ill-fated love interest Geli Raubal, or his dog, Blondi? Yes, yes, these were all important to him. But none ever surpassed the supreme value he placed on himself. His utter arrogance would be laughable if it weren’t so disturbingly tragic.

“A good National Socialist is one who would let himself be killed for his Fuhrer at any time.”

“Essentially, it all depends on me… because of my political talents. Probably no one will ever again have the confidence of the whole German people as I have. There will probably never again be a man with more authority.”

“As the last factor in this struggle I must – in all modesty – name my own person. Irreplaceable! Neither a military man nor a civilian could replace me! I am convinced of the powers of my intellect. No one has ever achieved what I have achieved! I have led the German people to a great height – even if the world does hate us now. The fate of the Reich depends only on me! I shall act accordingly! I shall shrink from nothing. I shall annihilate everyone who is opposed to me.”

As years passed and the war started to turn badly for Germany, Adolf Hitler let the masses know in no uncertain terms that they were letting him down. Their means were insufficient for his ends. The encircled German army in Stalingrad should fight to the last man. The crush of Soviet soldiers outside of Berlin only meant that the elderly, the young and the women must fight street-to-street in a conflagration for the Fuhrer. If the Fuhrer and his dream were to die, Germany must die with him. “I and It”. Hitler was pitiless when he was being let down.

“If the German people are to be defeated in this struggle, it must have been too weak. It has failed to prove its mettle before history & is destined only to destruction.”

“I have been Europe’s last hope. She proved incapable of refashioning herself by means of voluntary reform. She showed herself impervious to charm & persuasion. To take her I had to use violence.”

“Everyone has deceived me! No one has told me the truth!”

This cascade of self-consumed narcissism ended in the needless death of tens of millions. Millions who, in the eyes of the Fuhrer, were an expendable “it” in the name of his supreme “I”.

So where, if at all, is the “I and Thou” relationship to be found?

In the Trinity where God dialogues with Himself as Father, Son and Holy Spirit. In the relationship between God and humankind where man and woman have been created as dignified children in their Father’s image. And finally, in the relationship between human and human where we are to love the dignified face of Christ in one another. The Christian faith shouts from the rooftops about the imperishable value of each and every human being. It emphasizes the two great commandments: To love our God with all of our heart, soul and mind (that is, the Source of our dignity) and our neighbor as ourselves (in whom God’s endowed dignity resides). Are we fallible? Yes. But are we redeemable? Absolutely. In recognizing this ineradicable dignity inherent in our God and each other, we are less apt to use one another for selfish means, less likely to abuse ourselves, and more likely to hew closely to the God who gave us dignity.

The horrors of the “I and It” relationships are all too evident in history and in current times. We need little reminder of this. However, what we do need is the constant prompt to love our God, love our neighbor and love ourselves in spite of temptations to do otherwise. How easy is that? 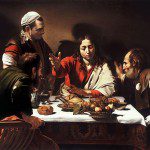 June 2, 2014 What Georges Bernanos Taught Me About Saints
Browse Our Archives
get the latest from
Catholic
Sign up for our newsletter
POPULAR AT PATHEOS Catholic
1