Forgive me. I am in a dark mood.

There is darkness these days. And sometimes, is seems, it approaches blackness. These days ISIS pours across the Middle East brazenly leaving the crucified, decapitated & raped in their wake. An unabashed Iranian regime with an undisputed record of deceit, oppression and genocidal aspirations moves ever closer to an internationally approved nuclear capability. A Russian despot without cover of ideology or provocation shamelessly violates every norm of international law in invading neighboring Ukraine. And meanwhile, we are asked to satisfy our appetites with a supremely dysfunctional Kardashian family in our homes and a sadomasochistic relationship at the movies.

These days language seems harsher. Appetites seem bigger. Knowledge is vast, but Wisdom is lost. Pleasure is plentiful, but Purpose is missing. Noise and Distraction reign, Silence and Reflection abscond.

There is darkness these days.

French Catholic writer Charles Peguy was shot and killed only months into the First World War. He was forty-one. And yet, even though he didn’t live to see the decadence of the ensuing decade, the despair of the Great Depression or the horrors of Bolshevism or Fascism, he made this observation,

Let me offer this.

We have stopped listening.

With an endless sea of information in our hands, before our eyes and in our ears, we have stopped listening. There is no quiet anymore. Instead, there is too much information of too little quality in too little time. This information may or may not translate into knowledge…but is even less likely to convert into wisdom. And so the time to engage in silence before God, to pray for his eternal wisdom and to reflect on the writings of the disciples or the lives of the saints is swallowed up by just one more tweet, one last post or one final perusal of the utterly meaningless story begging us to be read. We have stopped listening.

“There is not only a physical deafness which largely cuts people off from social life; there is also a ‘hardness of hearing’ where God is concerned, and this is something from which we particularly suffer in our own time. Put simply, we are no longer able to hear God – there are too many different frequencies filling our ears… Along with this hardness of hearing or outright deafness where God is concerned, we naturally lose our ability to speak with him and to him.”

We have forgotten God.

Once we have stopped listening, we have chosen to ignore the Source. As a result, we confidently crown ourselves masters of our own destiny and keepers of our own flame. There is nothing that can be given, we convince ourselves, that we can’t seek or that we haven’t already found. Our appetites are supreme and we become defensive lest anyone or anything pulls us from our path (which we have anointed as the true path). We have forgotten God.

“More than half a century ago, while I was still a child, I recall hearing a number of older people offer the following explanation for the great disasters that had befallen Russia: Men have forgotten God; that’s why all this has happened. Since then I have spent well-nigh fifty years working on the history of our Revolution; in the process I have read hundreds of books, collected hundreds of personal testimonies, and have already contributed eight volumes of my own toward the effort of clearing away the rubble left by that upheaval. But if I were asked today to formulate as concisely as possible the main cause of the ruinous Revolution that swallowed up some sixty million of our people, I could not put it more accurately than to repeat: Men have forgotten God; that’s why all this has happened.”

We have stopped living in Truth.

“Because you have not lived your faith, your faith is no longer alive; it has become abstract; it is, as it were, disincarnate. Perhaps we will discover in this disincarnation of the Word the true cause of our misfortunes.”

Here is what happens.

Fallible man (& woman) remain not only fallible, but gruesome. For when we know we are fallible, but willingly embrace redemption, we find a way out of the abyss. But in ignoring or denying our fallibility or the redemptive grace that is offered as a remedy, we sink deeper into the inky blackness of sin. Initially, we strike a proud picture of self-reliance and self-sufficiency. But too soon, lacking God’s miraculous Truth, we find ourselves flailing around to grab hold of some – any – surrogate truth. Devoid of dignity, devoid of purpose, devoid of hope, the godless man and his godless world tragically self-immolate. The Standard is ignored. The Benchmark is bypassed. The Grace is refused. Armed with a clever smile and a topped-off cocktail, the man without God (as Peguy describes above) finds himself spiritually devolved, disenchanted and deformed. As Bernanos would describe,

“[Bereft of all] artificial props with which society provides such people, they will find themselves as they really are, as they were without even knowing it – horrible undeveloped monsters, the stumps of men.”

There is darkness these days. Suffocating darkness. But our God of the Paschal Mystery knows it. Our God of the mockery, the scourge, the thorny crown and the cross knows it. He is our God in the Light and our God in the Darkness. Always faithful. And in spite of it all, he reminds us to come to him and not despair. Because there is a Truth. And it has prevailed.

“In the world you will have trouble, but take courage, I have conquered the world.”

Forgive me. I am in a dark mood.

But not for long. 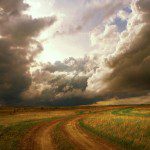 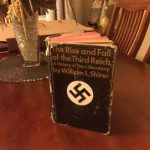 March 11, 2015 Twisted Cross, True Cross
Recent Comments
0 | Leave a Comment
Browse Our Archives
get the latest from
Catholic
Sign up for our newsletter
POPULAR AT PATHEOS Catholic
1