All of Chesterton’s Children

He had always wanted children.

Of course he did.

And it only made sense.

After all, G.K. Chesterton understood children. I mean really understood them. In the keenest of ways, he intuited them. And why was this? Because Gilbert Keith Chesterton in his singular mirthful and wondrous way never truly grew up. Quite simply, he was a winsome, but implacable boy forever bursting forth from an aging three-hundred pound body. Disheveled, disorganized and delayed, the unflappable Chesterton consistently found himself embarked on supremely intriguing adventures (and, more often, misadventures) donning his characteristic cape, pince-nez and sword stick. While he could humorously critique politicians and skillfully debate Shaw, Wells and Darrow, his greatest attentions were captured by the fallibility of dragons, the ethics of Elfland and the lack of poetry surrounding cheese.

As he grew older and became increasingly well known, life made greater demands on Chesterton. And with his classic relish and endless enthusiasm, Chesterton answered… with thousands of articles and essays, countless debates and speaking engagements, and well over one hundred books.

But he and his wife, Frances, always wanted children. Always.

“The most unfathomable schools and sages have never attained to the gravity which dwells in the eyes of a baby of three months old. It is the gravity of astonishment at the universe…As we walk the streets and see below us those delightful bulbous heads, three times too big for the body, we ought always primarily to remember that within every one of these heads there is a new universe, as new as it was on the seventh day of creation.” (In Defense of Baby Worship, GKC)

He reveled in a child’s wisdom.

“Because children have abounding vitality, because they are in spirit fierce and free, therefore they want things repeated and unchanged. They always say, “Do it again”; and the grown-up person does it again until he is nearly dead. For grown-up people are not strong enough to exult in monotony. But perhaps God is strong enough to exult in monotony. It is possible that God says every morning, “Do it again” to the sun; and every evening, “Do it again” to the moon. It may not be automatic necessity that makes all daisies alike; it may be that God makes every daisy separately, but has never got tired of making them. It may be that He has the eternal appetite of infancy; for we have sinned and grown old, and our Father is younger than we.” (Orthodoxy, GKC)

And he reveled in a child’s supreme value.

Grass and children
There seems no end to them.
But if there were but one blade of grass
Men would see that it is fairer than lilies,
And if we saw the first child
We should worship it as the God come to earth.

But he and his wife couldn’t.

They simply couldn’t. In spite of medicines and surgeries, prayers and well-wishers, they just couldn’t have any children.

When I first learned this years ago, I was so very sad for them. Having children of my own, I have found that the joy they have given me is incomparable, indescribable, limitless. But I was especially saddened because I think this is a truth that G.K. and Francis grasped. Acutely and painfully. They deeply understood the wonder, the wisdom and the utterly joyous value in having, loving and raising a child.

And yet. And yet, they were not bitter.

G.K. would compose this poem (which I will soon place in my daughters’ rooms).

Maisie Ward, publisher and friend, would note in her biography of G.K. Chesterton that,

“What was unusual both with Gilbert and Frances was the fact that they never allowed their disappointment in the matter of children to make them sour or jealous of others who had the joy that they had not. All through their lives they played with other people’s children; they chose on a train a compartment full of children; they planned amusements, they gave presents to the children of their friends.”

And, according to Ward, when the little son of the neighboring doctor illicitly ran atop an outside wall by the Chesterton’s, the boy peered at the three hundred pound man and pronounced, “I think you’re an ogre.” Over the ensuing threats leveled by the family nurse to the boy, Chesterton winked at him and said, “This wall is meant for little boys to run along.”

You see, what gets me – really gets me – about this story is that this large man with the softest heart and an abiding child-like wonder would endure the heartache of childlessness…and not become bitter. Instead, his wonder endured. His love only magnified. And deeply informed – even knocked down – by the pain that comes from the sufferings of being an adult, the boy inside Chesterton slowly stood up, dusted himself off and began to run again…in that carefree, grinning, exuberant way that boys run.

Chesterton’s joy and wonder would inform everything he would write and say until the day he died including his classic books Orthodoxy, The Everlasting Man, Autobiography and thousands of other works, speeches and debate positions. And the inextinguishable joy – the simple lack of cynicism and incomparable clarity of truth which could have been lost in a cauldron of personal bitterness – that Chesterton brought to everything he touched changed me and brought me to the Catholic Faith. Furthermore, it changed thousands upon thousands of others who similarly came to the Catholic Faith because of Chesterton’s joy, wisdom and wonder. Yes, yes, it is true that physically, Chesterton would remain childless. But spiritually, he is the grandest of patriarchs.

And he had them. Thousands of them.

After all, I should know…

I am one of them. 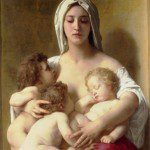 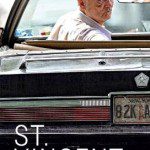 August 19, 2015 The Catholicism of Bill Murray's "St. Vincent"
Recent Comments
0 | Leave a Comment
"Nice article. But true as it may have been then, it is today a little ..."
DWSWesVirginny The Conversion of Evelyn Waugh & ..."
"Thank you. I find this article a good one to keep in mind tha argument ..."
Lady Bird What Pope Benedict XVI & G.K. ..."
"Gotta wonder how much of his idealization of children would have survived if he had ..."
The Sanity Inspectorن​ All of Chesterton’s Children
"I have been reading "The Four Men" every year at this time, late October. This ..."
P. O'Brien Not Missing the Sacramental Journey: Hilaire ..."
Browse Our Archives
Related posts from A Catholic Thinker