Scared to Become a Saint

Once upon a time, not long ago, I prayed that God would make me a Saint.

Now, I don’t go around divulging the innermost conversations I have with God lightly, but hear me out. In the midst of the topsy-turvy world we live in where one stress replaces or compounds another, there is something heartening not only in the Truth found in our Catholic Faith, but in the Saints who lived it out most fully. St. Thomas More, St. Therese of Lisieux, St. Augustine, St. Catherine of Siena all seem so very much larger because they knew what they were all about. God was central. Whatever else happened to them was detail.

Now that is clarity. And I wanted (and want) more of that.

But I have to be honest. When I prayed this prayer, I knew that what I was asking was crossing the Rubicon. It was stepping into deep waters that exhilarate, but also threaten to drown. The words of Christ to the presumptuous mother and the sons of Zebedee kept ringing in my mind:

Then the mother of the sons of Zebedee approached him with her sons and did him homage, wishing to ask him for something. He said to her, “What do you wish?” She answered him, “Command that these two sons of mine sit, one at your right and the other at your left, in your kingdom.”Jesus said in reply, “You do not know what you are asking. Can you drink the cup that I am going to drink?” They said to him, “We can.” He replied, “My cup you will indeed drink, but to sit at my right and at my left, [this] is not mine to give but is for those for whom it has been prepared by my Father.”

Could I drink from the cup which Christ himself drank from? Could I endure the mockery, the beatings, the sufferings of loved ones and the drawn-out execution? I am afraid to answer because I know how weak I am. In fact, shortly after my prayer, as I endured what seemed to be a series of trials (nothing in comparison to Christ’s), I found myself delicately (but somewhat fervently) backpedalling. Perhaps there is a step down from Sainthood that I could qualify for? Or maybe I could simply qualify as  “a good egg”?

But then the other day I came across Robert Frost’s poem, Come In. And it gave me even greater pause than I originally had about becoming a Saint.

As I came to the edge of the woods,
Thrush music — hark!
Now if it was dusk outside,
Inside it was dark.

Too dark in the woods for a bird
By sleight of wing
To better its perch for the night,
Though it still could sing.

The last of the light of the sun
That had died in the west
Still lived for one song more
In a thrush’s breast.

Far in the pillared dark
Thrush music went —
Almost like a call to come in
To the dark and lament.

But no, I was out for stars;
I would not come in.
I meant not even if asked;
And I hadn’t been.

I read an analysis of the poem written by some glittering luminary from the world of poetry. And, to be honest, I didn’t see what he saw in this poem. Oh, he waxed philosophic and saw rich symbolism here and dire warning there.  But I simply saw the holy & fearsome walk into Sainthood.

In my mind’s eye, it was me standing at the edge of the woods. Peering in, the dark woods stood with such depth as to be almost suffocating. The darkness was tragedy, suffering, trial, tribulation  – the daunting, unforgiving environs of the Saints. The consumption of Therese of Lisieux, the Tower of Thomas More, the flames of Joan of Arc and the trial of Edmund Campion. And what of the poems thrush, the singing bird? That was a Saint. And the brutal setting did not consume the Saint anymore than the darkened woods consumed the thrush. As a matter of fact, as the light faded outside the woods where I stood and left the heart of the woods in inky blackness, the thrush’s music emerged more beautifully. Lilting. Haunting. Steadfast. Faithful music that invited me (and you) in. How paradoxical it seemed that out of the blackest of settings came the brightest of songs.

And I? I stood outside of the woods. I was entranced by the music. The music was made more beautiful because it was seared with the honest mix of eternal hope and temporal loss. And I wondered, could I enter the woods? Could I drink from that cup? It seems so doubtful. But on this day, I, like Robert Frost, am out for the stars. The brilliance of those distant fiery bodies, though less intimate, is sometimes safer and more manageable when it seems a bit removed. And the alternative darkness of the woods, while inspiring the sweetest of music from the thrush within, is still so damn dark.

There is one part of the poem where my take disagrees with Robert Frost. It is where he says that he wasn’t asked to come into the woods. In my interpretation, we are all invited by God. Into greater fullness, rich fidelity, but also deeper trials that will only make us stronger in our faith.

God calls us each to be Saints. And perhaps someday I will live up to the awesome responsibility.

For now, I think I’ll listen to that thrush’s sweet song…

And inch a bit closer to the woods. 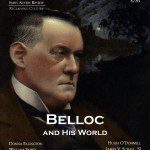 November 14, 2015 God Protect France
Recent Comments
0 | Leave a Comment
"Nice article. But true as it may have been then, it is today a little ..."
DWSWesVirginny The Conversion of Evelyn Waugh & ..."
"Thank you. I find this article a good one to keep in mind tha argument ..."
Lady Bird What Pope Benedict XVI & G.K. ..."
"Gotta wonder how much of his idealization of children would have survived if he had ..."
The Sanity Inspectorن​ All of Chesterton’s Children
"I have been reading "The Four Men" every year at this time, late October. This ..."
P. O'Brien Not Missing the Sacramental Journey: Hilaire ..."
Browse Our Archives
Related posts from A Catholic Thinker 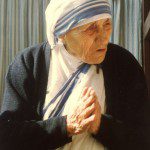 Catholic
Mother Teresa: The Saint of the Darkness
A Catholic Thinker