A Blanket Fort of Torches

As my coven family and I gathered on February 1st 2020 for the Feast of Torches, there was no way to know it would be the last time we gathered. The World Health Organization had only a day prior announced a “public health emergency,” and Covid-19 was still a whisper floating around the edges of the morning news. It would be a week yet before we realized the gravity of the situation.

A Blanket Fort of Torches

The feast of torches is a time of pausing to look back over ones shoulder. The longest days, the coldest months, the waiting for spring, are nearly done; spring is peering out from around the corner, easily spotted in tentative daffodils and creatures stirring in the tree-line. Hope lies before us, and the darkest days are over. The problem, I suppose, with pausing to take a breath is that we can never be quite certain that we’ve crossed the mark – that the worst is behind us.

All those months ago I found myself at crossroads in my life. My twin children now a year old, the draft of “Do I Have To Wear Black?” was nearly complete, and I was just finishing up the dueling degrees that I’d been taking as a full time student (Mortuary Sciences and Education). It felt like being deep in the earth, trying to scrabble free from the confines of a seed hull and burst forth fully bloomed – fully realized – and ready to face the sun.

And so, I decided that this time we would celebrate differently.

All in good fun…

We as eschewed all things serious and built a blanket fort around our altar, our own place in the earth from which to peer out and see if the ghosts of winter were truly behind us. We sat around the altar, clinging to flashlights in the dark (our “torches” for the Feast of) and told the sort of campfire stories you might expect. Who we were, what we were becoming. We spoke openly of each others flaws and what could be made better, we giggled over a blowtorch as we made s’mores for cakes and wine, and we passed around a bottle of whiskey as though filched from some parents liquor cabinet as we sipped freely, and without pretension.

There was no cleansing as we went into our fort; but when our ritual was done we sprinted forth like flowers bursting free from the earth, to splash salt and water on our bodies over a communal basin in my tiny bathroom.

and we came out of it something more than we entered in.

We could not have known then that our time in the earth was only just beginning. That we would face longer, colder, winter days than we could have imagined – that more darkness awaited us; but once again we face the Feast of Torches with what looks like an end of winter in sight, the glimmer of hope visible on the horizon.

So this time, I will again construct that blanket fort of torches. Though I may sit in it alone, “torch” light will glimmer for each soul separate from me, and for lives lost. This time I will heed the lesson that a moments pause is needed, but that there will come times when winter is longer and colder than we could have imagined – and that the sun rises in it’s own time.

January 15, 2021
Dear Mortellus: How Do I Protect Myself?
Next Post 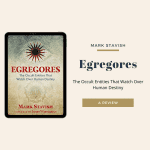 February 12, 2021 Review: Egregores
Browse Our Archives
Related posts from A Crow and The Dead