“Cyrene is also the location where Jason used the iynx wheel to cause Medea to fall in love with him.
According to Pindar Jason did this to ensure that Medea would follow him back to Athens.” ~ Circle for Hekate, V.1, d’Este

The Wheel of Hekate is a symbol that has become synonymous with the Goddess of the Crossroads in the last few decades, and it is confusingly sometimes named as an Iynx or Strophalos – which are ritual tools.  A slight variant of the symbol appears in the Dua Lipa  (featuring Madonna) “Levitating” video, in which there is a lot of significant Hekate related symbolism with a heavy emphasis on the Moon which is one of the likely sources for a surge in interest in the symbol.

But what is this symbol and why is it linked to Hekate?

Screen Cap of Dua Lipa – Levitating showing a variant of the symbol on a record.
This is one of several occurrences of the symbol in the video.

I have not been able to track the symbol to a particular teacher or book, but have been told that it became used for Hekate in contemporary Pagan circles in the 1980’s.  If anyone reading this can verify this, or provide further information – please do!   Historically it does not appear to be a symbol linked specifically to Hekate, although the symbol and variant thereof, can be found on many small metal disks likely used as decoration dating to the Mycenean and Minoan civilisations.  As an aside, I have often pondered, but not found evidence, that perhaps there is a link to the island of Aegina, where the Ancient Greek Geographer Pausanius tells us there was an important celebration of the Mysteries of Hekate.  The Minoan treasures found on Aegina and currently in the British Museum collection is phenomenal, and includes depictions of Potnia Theron (Lady of the Animals, an iconic female figure closely associated with both Hekate and the Goddess Artemis).  For convenience, here is a search showing the images on the British Museum Images database.

Wheel symbols are frequently associated with Hekate, but with the more usual sunwheel design.  Dozens of these symbols are carved on the steps of the ruins of the Temple of Hekate in Lagina (Caria, modern Turkey). 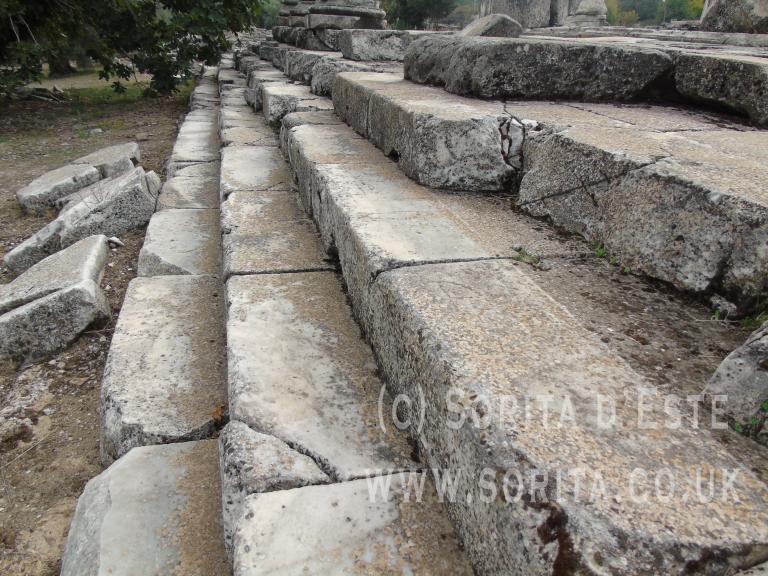 Both the four spoked, and eight spoked wheels are found not only in Lagina, but also on many depictions, inscriptions and amulets showing the Goddess Hekate.  There is a discussion about these in my book Circle for Hekate, Volume 1 (“Stars of Wheels, p.207 to 212).

Unfortunately, as with many things, there has been a bit of a misunderstanding about what Hekate’s Wheel is, which has resulted in it also being named as Hekate’s Iynx or Hekate’s Strophalos.  Rankine and I named these tools in our 2009 book Hekate: Liminal Rites, and in Circle for Hekate in 2017 I dedicated a chapter to the topic, but because the conflated use of the terminology is so widespread, there is still a lot of confusion about it, which I hope this article will help untangle – at least a little!

“The word iynx comes from the Greek name for the wryneck bird, a member of the woodpecker family who enjoys feasting on ants. The theory is that the original form in which the iynx wheel was used for magical purposes involved tying a wryneck to a wooden wheel which was then spun. A well-balanced iynx wheel makes a repetitive whirring sound, which somewhat resembles the pulsing call of the iynx bird in the wild.” – Circle for Hekate, V.1

The tool is named after the bird and was most often associated with the Goddess of Love, Aphrodite, and her son Eros who uses it as a tool to draw lovers together or to draw out passion.  If you explore depictions of Eros, you will often see a little wheel or ring dangling from a string he is holding – this is the iynx!

In Theocritus’ Idylls, a desperate woman approaches a practitioner of magic to help her drawback an unfaithful lover.  The spell calls on the goddess as Hekate and repeatedly the iynx (being used in the spell) is implored to draw the lover back or home.  Although Hekate may not be the first goddess we think of when it comes to love magics, there are many examples of where she was the deity invoked in matters of the heart.

Illes-Johnston in her book Hekate Soteira also discusses the Iynx wheel, saying that:

“The sympathetic importance of the sound made by the whirling iynx-wheel fits in with the general importance of sounds in magical or theurgical acts. … magicians believed that the correct pronunciation of each of the seven Greek vowels affected one of the seven astral spheres and therefore aided in invoking and controlling the sphere’s divinities…” – Johnston  (Hekate Soteira, 1990)

The iynx is one of several ritual tools used in the ancient world which was spun in one way or another to produce the desired effect and outcome. In addition to being associated with love magic, it can also be found depicted in death and funerary scenes. It was associated with Hekate, alongside the strophalos, rhombus and bull-roarer.   All of these are tools that are spun and whirred, the bull-roarer today is known among practitioners of magic as a tool frequently used for weather-related magic, but in the ancient world, it was associated with the Mysteries of Dionysos and Kybele.  Both in turn, and also Aphrodite, have strong connections to the Mysteries of Hekate.   For more about the Iynx and Magic Wheels as linked to Hekate see Circle for Hekate, Volume I, p. 240-245.

As a child growing up in the 70’s and 80’s in Africa we made a lot of our own toys, and sometimes we would take buttons, string some embroidery thread through it and make little whirring wheels. These child’s toys, which can still be found for sale in some toy shops (sold as spinners or whirlygigs), including some 21st-century plastic ones with LED lights, entertained us for hours, and they were essentially iynx wheels!  Different designs can be seen depicted on archaeological finds, but essentially they are all circular disks, with two (or more) central holes through which string is threaded.  You use the tool by holding the two ends of the string in opposite hands and then spinning the wheel until the string has been wound in one direction, then you pull the string and release in a rhythmic manner, allowing the wheel in the center to spin.  Depending on the design, the wheel will emit a whirring sound.

The tool is incredible for meditation, contemplation as well as for ritual work.

Have you used it?  Have you made your own?  If not, go and try it out now!  If you don’t have the tools to make it from wood or metal, it is possible to use a firm piece of cardboard to try it out, so no excuses!

ps. If you have enjoyed this introduction and you find this an interesting tool, how about helping me differentiate between Hekate’s Wheel (the symbol) and the Iynx (the ritual object or tool)?

Gow, The Journal for Hellenic Studies, 1934 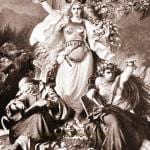 August 28, 2020 Hekate & Pop Culture : Liminal Fantasies, or Modern Temples?
Recent Comments
0 | Leave a Comment
"I almost did not read this as I am not Wiccan and do not want ..."
JP Vanir Wicca, the Tree of Life and ..."
"This is a good article and book. Blessed be! :)"
Viktor_Aradia The Morrigan – Faerie Queen
"I'm sure Freemasonry also has a lot to learn from Wicca (Witchcraft) too. :)"
Viktor_Aradia Payam Nabarz – Children of Earth ..."
"Thank you! His work is very interesting, so do!"
Sorita d'Este Payam Nabarz – Children of Earth ..."
Browse Our Archives
Related posts from Adamantine Muse