For good or for bad, the term Islamist is now part of the English lexicon, perhaps permanently.  Those with friendly and those with hostile intent employ this term to distinguish between friendly and hostile Muslims.  Friendly Muslims align themselves with Islam.  Hostile Muslims, on the other hand, are Islamists.

Thanks to the way in which Western media has employed the term for a decade, the distinct characteristic of the Islamist seems to be that he or she wants Islam (or some form of it) to rule the world, whether or not the world is willing.

I’m not about to weigh in on the extent to which Islamist is an appropriate term.  This discussion is best left to insiders for whom such terms have serious, material implications.

As a Mormon insider on whom public discourse about Mormonism has a serious, material effect, I do think it’s time that we start using the term Mormonist.  Those of us who desperately resent the implication that the very bad behavior of some Mormons is an indication of the very bad nature of Mormonism—and, hence, of the very inescapable badness in all self-identifying Mormons—need a term that distinguishes the friendly Mormons from the hostile.

Some such terms are already in play.  New Order Mormon, or NOM, has emerged to indicate a type of Mormon who looks away from the right-wing, Christianist peak the LDS Church summited in the 1950’s, and who, instead, looks toward a new, socially liberal and inclusive Mormon horizon.

Alongside these terms, Mormonist identifies the type of Mormon who, like the Islamist, reasons that a world under theocratic rule will be a better world, and, hence, that the means of realizing that theocratic triumph are justified.  We need to name this brand of Mormonism, not only so that outsiders aren’t confused about what constitutes Mormon thought, but also to contain and to curtail this type of Mormonism more effectively.

First, the LDS church has decided to oppose the legalization of medical marijuana in Utah.

Second, the LDS church has recently scuttled an anti-hate-crime bill in Utah.

Third, the overwhelmingly-LDS-Mormon legislature in Utah has collectively recommended the repeal of the U.S. Constitution’s 17th amendment, symbolically claiming for itself the privilege of appointing Utah’s senators (rather than allowing Utahns to elect them).

The discerning eye will note that the Mormonist maneuvering in all three of these stories takes place in Utah.  Since more LDS Mormons now live outside the U.S. than live inside it—let alone inside Utah—one might be tempted to say that the petty politics of Utah’s mountain enclave couldn’t be indicative of the nature of the international Mormon phenomenon.

However, the LDS church’s highest-level leadership is overwhelmingly drawn from the dry and brittle valleys of Utah, and these leaders can’t seem to escape the feeling they were raised to feel that god designed Utah to be the last bastion of goodness, and that from Utah must all goodness go out.

Brigham Young started it.  Back in the mid-nineteenth century, he envisioned Utah as a perfectly autonomous Mormon zone, providing a safe, secure place for his LDS church to pursue its own interests without opposition.  He wasn’t able to make it so, of course, as the United States had its own manifest destiny, but his thunderous rhetoric, hurled at his people over the course of three decades, nevertheless embedded in the very granite of the canyons the feeling that Utah stands apart, and for the sake of Mormonism’s responsibility to save the world.

It’s impossible to know whether he was speaking a sincere expectation or just wringing out the value that apocalyptic visions seem to have, but, through the 1850’s Brigham told his beleaguered followers that the United States would consume itself in a civil war, and the LDS Mormons would ride out of Utah to rebuild the nation that had exiled them.

That Mormonist attitude, this century-and-a-half later, has shaped the imagination of the cohort of men who make LDS church decisions, so that their strategies to keep Utah apart from the mores and values of the country of which it is a political part impose unnaturally and inordinately on LDS Mormons around the world who have no reason to care whether pot is legal in Utah, or who, indeed, pray that their brothers and sisters in Utah will get the kind of relief for their suffering that they, themselves, enjoy as perfectly faithful LDS Mormons in Argentina, Spain, and Canada (and Minnesota).  Probably the only thing that can relieve the global LDS church of the imposition of the parochial concerns over Utah’s functional autonomy is a reconstitution of the church’s highest governing bodies so that they consist of LDS Mormons from everywhere.

Given how LDS leaders currently secure their positions, the genuinely international composition of church leadership is still generations away.

In the meantime, let’s name this problem.  Laboring to determine the political lives of non-Mormons and of Mormons who are otherwise disposed, politically, is not pure religion and undefiled, which works hard to alleviate suffering and to inspire happiness.  The political project that will over-write all other interests when it can, and which assumes, in any case, that one preposterously small community affixed to an almost un-locatable corner of the global map should model the best for everyone everywhere is a Mormonist endeavor.

*Oddly, the acronym for Neo-Orthodox Mormon is also NOM. 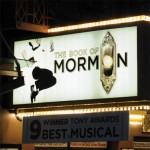 March 23, 2016 Mormon, the Musical
Recent Comments
0 | Leave a Comment
Browse Our Archives
get the latest from
Latter-day Saint
Sign up for our newsletter
Related posts from Aestheism