This is the GOP’s Bloody Legacy

We sit, together, in a moment of terror, brought about by racist murder and the murderous racism of the man who is in charge of our law enforcement and military.

The worst part of this time of terror is that it’s only going to get worse.

There is nothing in the past year of presidential politics to suggest that this week’s catastrophe, finally, precipitates a change. Nothing in the past six months suggests that the racist maniac in the White House will, today, decide to be human.

On the contrary, everything we have seen, everything we can see assures us that the next thing will be more terrible, more unbelievable, more unacceptable, even while we have come to accept so much. The next racist murder will be bigger, more horrific. The morally gangrenous president’s next justification of racist murder will be balder and bolder.

The next bloody cataclysm will fall on us quickly—next week, perhaps tomorrow afternoon. And it will be followed the next week, the next afternoon, by something even more bloody, even more inhuman, yet, and then by even more grotesquely monstrous advocacy for racist murder than we’ve already heard from our Gargoyle-in-Chief.

Any who still think that there’s no call to put a stop to this before next week—before tomorrow afternoon—arrives, still maintains that deliberate blindness that made it possible for this racist maniac to win the Electoral College.

I have seen some slim interest among GOP representatives in formally censuring their racist maniac. A censure, no matter how harshly worded, will not keep next week’s terror away.

We are far past the point at which “I denounce” and “I condemn” have any value. Next week’s horrible murder will not be a denunciation of opponents of white supremacy. Next week’s brutal assassination will not be a condemnation of advocates of justice for all. It will be death, violent, bloody, and final.

If the GOP representatives in the House of Representatives can stop this, for all our sakes, but don’t stop it, and, instead, let next week’s inevitable horror and terror and misery come—if they allow next week’s murder of women and fathers and children—what must we think?

It won’t be for national security.

It certainly won’t be for health care.

If they let next week’s cataclysm come, this cohort of GOP legislators will be remembered, forever, only for protecting their racist maniac in the White House.

And they’ll be remembered as the people who protected him, in disregard of all moral responsibility and reason, not only by those of us who don’t know them, and not only by the generations yet to be born who will come to know them only in history books as the inexplicably selfish people who might have made history so very different.

Not only to the masses of strangers, but to their own grandchildren will this cohort of GOP representatives be known as craven, ethically bankrupt failures. The heirs of these GOP representatives will grow up seeing so clearly that granddad or grandma could have prevented next week’s horror and chose not to.

The GOP representatives in the House of Representatives will be remembered for protecting this racist maniac in the White House and for all the blood, carnage, horror, and death that he will yet, inevitably, wreak.

These GOP representatives in the House of Representatives—with Paul Ryan at their head, solemnly denouncing “textbook racism” a year ago and, nevertheless, vowing to vote for the textbook racist—made this nightmare we’re all now living together.

They can undo what they’ve done to the country. 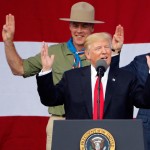 July 28, 2017
The Moral Bankruptcy of the Boy Scouts
Next Post

August 29, 2017 Racism Is Not About Feeling
Recent Comments
0 | Leave a Comment
Browse Our Archives
get the latest from
Latter-day Saint
Sign up for our newsletter
Related posts from Aestheism