Think of one behavior that’s harmful for you …

Here’s the big question: How do you safeguard your life and avoid a harmful behavior?

Years ago I edited several books for an organization that championed weight loss, and I first learned this excellent technique then. It’s called Play the Tape Forward, and it’s so good it applies to areas of life other than weight loss.

Here’s how it works: If you’re faced with an option to go down a harmful road, instead of giving in to the harmful behavior, imagine how choosing that destructive option will play out over time. Look past the temporary pleasure of the moment, and consider where that particular behavior will lead.

When you visualize the predictable results of an impulsive behavior, instead of focusing on the momentary “high,” you stop long enough to look past the transitory good feelings and focus on the not-so-pleasant end result.

You see the remorse, inevitable harm, damaged relationships, or lack of self-respect that result from falling into harmful behavior.

The technique hearkens back to the days when we used cassette tapes instead of mp3s, or actual video cassettes instead of electronic formats. Similar to the formats today, you can fast forward a song or video to a place “in the future.”

Play the tape forward … and see your car overturned in the ditch as a result of road rage.

Play the tape forward … and see the doctor sadly shaking his head at the numbers of your high blood pressure.

Play the tape forward … and see the horrific conversation you have with your wife when an affair is discovered.

Here’s the better scenario: Once you’ve considered the negative consequences of a behavior, then play a different tape forward.

Picture instead you resisting a harmful direction, and imagine how good you’ll feel by choosing the better road.

See yourself holding your head high.

Playing the tape forward is a powerful tool when combating the immediate-gratification mentality that too many men succumb to.

Give the technique a try the next time you want to avoid a destructive behavior.

Question: Have you ever used the “Play it forward” technique? If so, what resulted? If not, what other ways do you avoid harm? 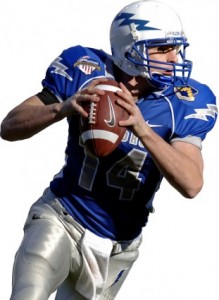