It is surely strange to begin a history of ancient naturalism with modern cosmology.

Nevertheless, starting with the present can help elucidate preconceptions before proceeding to the past.  In so doing, a clear picture of current understandings can be developed, the better to distinguish our own assumptions and avoid projecting them onto ancient peoples.  At the same time, a foundation in the underlying concepts under investigation can be established.

This post is part of Naturalistic Traditions, a column exploring naturalism in Pagan ways.  The present series explores the historical roots of naturalistic ways in order to gain an expanded sense of the historicity of the diverse styles of belief common in Paganism today.  For previous posts in this series, see the index at the bottom.

What is modern cosmology?

Modern cosmology, in a nutshell, is current science’s best answer to “What is the universe like?” and “How did we get here?”

More technically, modern physical cosmology describes the contemporary scientific study of the structure and dynamics of the physical universe, concerned with fundamental questions of its formation and evolution.

With that brief introduction, let’s dive right in.  An analysis of key methods and assumptions, useful for comparing and contrasting with past eras, follows afterward.

Most creation stories start with how it all began.  Modern cosmology does so as well, but with one crucial caveat: however impersonal the unfolding of the cosmos may be, our understanding of it arrives via human observation, reasoning, and experiment.  Thus, the particular flavor of the modern creation story is best conveyed by starting with the human perspective.  Many different people contributed to it, but one name will suffice as an example: Hubble.

The year was 1922.  Edwin Hubble, sitting before the largest telescope at the time, turned its lens on some of the “nebulae” in deep space.  What he saw… couldn’t be right.  They were not nebulae at all, but galaxies like our own!

Until that point, it was thought that the universe consisted entirely of the Milky Way, which was static and eternal.  But Hubble discovered we had barely fathomed the cosmos.  There were billions more galaxies like ours, and what’s more – here’s where it really got crazy – they were all hurtling away from each other at increasing speeds.

If objects in the universe were moving away from each other, that implied they had once been together.  The universe was not static and eternal, it had an origin: what we now call the Big Bang.

Hubble had the seed of a new creation story.  However, it didn’t match with empirical observation.  His calculations showed that the universe was younger than the earth, which was clearly impossible.  Thus, however intriguing the story, it was not adopted.  A beautiful theory was ruined by a brute fact.  As in all good science, fact prevails over fancy.

Later, it was discovered that Hubble’s measurements had been off by a factor of ten.  With more accurate measurements, theory fit fact.  The new creation story worked.  More researchers pursued many other independent lines of evidence all converging confidently on the same picture: the universe is expanding, and it began with a bang.

This theory makes an interesting prediction.  If the universe really began with a super-hot explosion, there should be a feint but measurable trace of it, a residual afterglow if you will.  Modern instruments have since detected exactly that: the Cosmic Microwave Background Radiation.  Thermal radiation, unassociated with stars, galaxies, or other objects, uniformly fills the entire observable universe.  This is considered a key confirmation of the Big Bang model.

Recent discoveries may have even provided for why the Big Bang happened in the first place.  Physicist Lawrence Krauss has examined the nature of nothing – meaning empty space with no particles, no energy, and no radiation – and found it to be a “a boiling, bubbling, brew of virtual particles that are popping in and out of existence on a time scale so short you can’t see them.”  As ephemeral as such virtual particles may seem, they are responsible for “the best comparisons between theory and experiment in all of science, to ten decimal places in quantum electrodynamics.”  While most of us would intuit this bubbling brew to be “something”, our human difficulties conceiving of “nothing” in this way is no measure of the actual nature of it.  The cause of the Big Bang then, according to Krauss, is that it had to happen: “If you have nothing in quantum mechanics, you’ll always get something.”

This narrative does no justice to the innumerable other contributors to modern cosmology, not the least of which is George Lemaître, who actually discovered the expansion of the universe first but published in a lesser-known journal.  Nor does it do justice to the many more considerations and lines of evidence necessary to establish firm confidence in the Big Bang theory.  Nevertheless, it provides a taste.  Moreover, the story has been told not to make a hero of Hubble, though a hero he may be, but to illustrate some of modern cosmology’s methods and assumptions, which may lurk in the backs of our minds as we gaze upon the past.

Pertinent in this story are human observation, reasoning, and empirical evidence.  Though Hubble’s original expanding-universe hypothesis had been correct, it was rejected on empirical criteria.  Furthermore, error and correction played a crucial part, involving a community of peer criticism.  Scientific knowledge is assumed from the start to be fallible and progressive: fallible in that it is always liable to error, and progressive in that discoveries of error lead to new and better theories closer to the truth.

These features mark modern science off from many other historical traditions.  They developed only over long centuries in particular contexts, and we would do well neither to project them onto the past nor to scorn past thinkers for lacking what had not yet developed.

More can be said of the assumptions implicit in modern cosmology.  Everything in the universe is depicted as unfolding according to impersonal physical laws.  Those last three terms will prove crucial to our investigation, so it will be worthwhile to develop them.

These assumptions – it is misleading even to refer to them as assumptions, since they have been arrived at through extensive testing, refinement, and more testing – are characteristic of modern science in general, as well as the philosophy of naturalism which underpins it.

They are not, however, unique to modern science.  Multiple ancient traditions have incorporated them in whole or in part.  Thus, they offer an important means of comparison and contrast with past eras.

We are now in a better position to understand naturalism.  As mentioned last time, naturalism can be defined as “the system of those who find all primary causes in nature” (Furst and Skrine, 1971).  It should now be clear that nature, in this context, refers to the universe of impersonal physical laws.  Each people and age has its own concept of nature, and it will be important to keep the modern concept in its era and ancient ones in theirs.

The way to live?

Every creation story implies something about how we ought to live.  Is modern cosmology an exception?

The reason for hesitation lies in what philosophers since Hume have more or less acknowledged as the is-ought problem or naturalistic fallacy: you can’t get an ought from an is.  This separation of facts and values is a distinction ancient peoples did not make and which remains questionable today.  The next installment of this series will dwell further upon this issue, as we use evolution to explore modern views on human life and purpose.

Meanwhile, scientists are not completely reticent on the implications for human values.  To conclude, here are a few such nuggets from Lawrence Krauss:

For an inspiring presentation of Big History from the Big Bang to the present, see David Christian’s TED Talk.  See also the International Big History Association and TheGreatStory.org.

Join us next month for:  Naturalistic Traditions: Evolution by natural selection 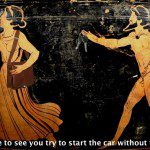 March 1, 2013 Loop of Brighid: The Mysticism of Devotion, Part 4
Recent Comments
0 | Leave a Comment
"Yes, thats why its called Patheos: Pagan. Patheos is a multi belief website with blogs ..."
Michelle Gillian The Dance of Pagan Recovery: Welcome ..."
"Simply vile and disgusting how a supposed catholic website or blog is fooling its readers ..."
Luis rodrigues coelho The Dance of Pagan Recovery: Welcome ..."
"What's kind of kooky about being disabled and invisible, or different and invisible, is that ..."
JenniWest The Corner Crone: Why Are You ..."
"This really sounds interesting. Health is so important."
WildestSea The Corner Crone: The Witch’s Guide ..."
Browse Our Archives
Related posts from Agora