Memorial Day is usually considered the beginning of summer in the U.S.

Since I became Pagan, I’ve both enjoyed the holiday and felt it was seriously out of sync with the Wheel of the Year. And yet, it has elements of ritual that fit well with my personal Pagan blend.

We don’t have any war veterans in the immediate family, so that part of the holiday has less meaning for us. I have a cousin who spent a couple hitches in the Navy, both of them at a submarine base in peaceful Scotland. His father served in the Navy in return for tuition to become an electrical engineer. My father spent some time in the Army Corps of Engineers. Neither served in a war zone, despite being in the military during the initial years of the U.S. involvement in Vietnam.

No one in my immediate family served in World Wars I or II, or Korea. It’s possible we had some Civil War veterans. My research on Ancestry.com turned up two Revolutionary War veterans from Maryland, who were rewarded for their service with farmland.

Having once bent swords to plowshares, my people kept plowing. A farmer may never get rich, but his family usually eats well.

So on Memorial Day, my family meets for a huge cookout. The barbeque these days is held on a piece of the Wright family farm, which my Navy veteran cousin has outfitted with a manufactured pond and a climate-controlled weekend cabin. I’m of the generation that sits on the porch and chats. My cousin’s children, in their late teens and early twenties, float in the pond on inner tubes.

Later, we’ll go to the grave sites. There’s Grandma and Grandpa Wright next to the church they attended. My aunt has been known to spritz their dark granite tombstone with Windex. Then it’s on to a small family cemetery reached by a path mowed into the tall prairie grasses. Until last year, there was no sign directing families to it. The local philosophy seemed to be that the cemetery’s all Logues and Wrights and Durbins, and if you’re not related, well, you don’t need to know where the small wooded cemetery is, anyway. We leave flowers, then go on to a third cemetery, where Great-Grandma and Great-Grandpa Sweazy and their parents rest. More flowers.

It’s summer Samhain, and feels so odd in the Pagan context. And yet, in another way, it perfectly fits with my new traditions. Keeping in touch with and honoring one’s ancestors is very Celtic. And my readings of Orion Foxwood have taught me that it is through the Ancestors that we reach our Faery cousins. I also learned to revere ancestors both of blood and spirit through my studies of  the Anderson Feri Tradition and my deeper work with its descendant, Morningstar Mystery School.

So on Memorial Day weekend, I’ll be connecting with family of blood. I’ll honor the dead and strengthen ties with the living. My cousins and I will tell stories about the summers we spent on the farm, the long pony rides into the woods, the days spent splashing in the little creek, the secret afternoons daring each other to jump off the highest stack of hay bales onto the straw-strewn barn floor.

We remember, too, watching the soft green plants grow into fields of soybeans and corn, or a garden full of beans and tomatoes. None of us ever sat down for an afternoon of cartoons during gardening season without a tub full of beans to snap or peas to shell for the canning jars. On Memorial Day weekends, we would know all those things were ahead of us. It was a summer ritual, and my introduction to the turning of the Wheel of the Year. My Pagan self was born in those Illinois farm summers. 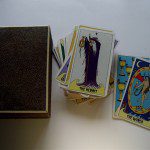 May 15, 2013
Druid Thoughts: The Ethics of Divination
Next Post 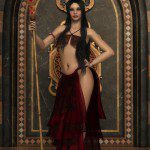 May 20, 2013 Seekers and Guides: A Balm for a Pagan Plague - High Priestess’ Disease (Part 1)
Recent Comments
0 | Leave a Comment
"According to a ghost hunter I met, those "orbs" aren't lens flare, they are flash ..."
PhaedraHPS Irish-American Witchcraft: Pareidolia and Fairies – ..."
"I took part in the Fairy Survey. I was able to find my account in ..."
BrigidsBlest Irish-American Witchcraft: Pareidolia and Fairies – ..."
"Very True, but some are incapable of doing the check, or looking into the people ..."
Grendal King Cross and Crossroads: How to Spot ..."
"I've done this myself, albeit with a pinch of salt. Indeed I have one photo ..."
IvanTheHare Irish-American Witchcraft: Pareidolia and Fairies – ..."
Browse Our Archives
get the latest from
Agora
Sign up for our newsletter
POPULAR AT PATHEOS Pagan
1