Loop of Brighid: Private Practices 5 – The Manor of Tara

Loop of Brighid: Private Practices 5 – The Manor of Tara May 23, 2013 Christopher Scott Thompson 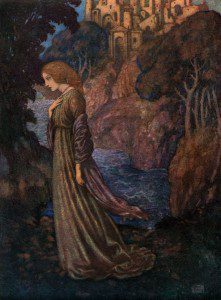 The text called “The Settling of the Manor of Tara” presents us with a Gaelic model of sacred space, with the four directions arrayed around the center. This model was also used in Irish monasticism, where monks would pray at the eastern, southern, western and northern quarters followed by prayers at the center of the circle directed upward to heaven and then down to the earth.

This monastic practice incorporates the Celtic concept of the three realms along with the four directions, by directing prayers to the four quarters of the Land, then to the Sky, and finally to the lower realm which is equivalent to the Sea.

In the previous ritual, we visualized the Four Treasures of the Tuatha de Danann and the image of Brighid as the sun above the cities of heaven. The purpose of this ritual was to take on the powers associated with sovereignty, infused with the divine power of the fire of creation. Next we will visualize the dispensing of those powers to the three realms.

Begin by breathing slowly and deeply, then raise the circle of fire. You can also perform the fiery water, three sisters and four treasures rituals if you wish. Once you have attained a mental state in which you can clearly feel the power of the Brig completely infusing you, imagine yourself at the center of the world in a vibrant, green landscape. You are facing east, toward the rising sun.

The power of the Sovereignty is yours, and you will now both receive and dispense its blessings, beginning with the eastern quarter. This is the quarter of Prosperity, which is why some writers have associated it with the Undry Cauldron of Brighid’s father the Dagda. As it says in “The Settling of the Manor of Tara”:

“‘Her prosperity then,’ said he, ‘and her supplies, her bee-hives, her contests, her feats of arms, her householders, her nobles, her wonders, her good custom, her good manners, her splendour, her abundance, her dignity, her strength, her wealth, her householding, her many arts, her accoutrements, her many treasures, her satin, her serge, her silks, her cloths, her green spotted cloth, her hospitality, from the eastern part in the east.’”

Visualize yourself turning to the south, the quarter of Music. According to “The Settling of the Manor of Tara,” the south is associated with:

“‘Her waterfalls, her fairs, her nobles, her reavers, her knowledge, her subtlety, her musicianship, her melody, her minstrelsy, her wisdom, her honour, her music, her learning, her teaching, her warriorship, her fidchell playing, her vehemence, her fierceness, her poetical art, her advocacy, her modesty, her code, her retinue, her fertility, from the southern part in the south.’”

Open your hands to dispense the blessings of music, poetry and learning just like Brighid Herself.

Visualize yourself turning to the west, the quarter of Wisdom. The west, in Celtic belief, was associated with the ancestors and the wisdom in question is ancestral lore. According to “The Settling of the Manor of Tara,” the west is associated with:

“Her learning, her foundation, her teaching, her alliance, her judgement, her chronicles, her counsels, her stories, her histories, her science, her comeliness, her eloquence, her beauty, her modesty, her bounty, her abundance, her wealth — from the western part in the west.’”

Open your hands to dispense the blessings of wisdom and learning.

Visualize yourself turning to the north, the quarter of Battle. According to “The Settling of the Manor of Tara,” the north is associated with:

“‘Her battles, also,’ said he, ‘and her contentions, her hardihood, her rough places, her strifes, her haughtiness, her unprofitableness, her pride, her captures, her assaults, her hardness, her wars, her conflicts, From the northern part in the north.’”

Open your hands to dispense the strength and courage needed to triumph in battle.

Turn toward the east again to gaze up at the Sky, the upper realm of Celtic myth. Feel the power of the Brig coursing through you from up above, flowing through your body and into the Land. The spot where you are standing is the sacred center, the place of the Sovereignty. As it says in “The Settling of the Manor of Tara,” the center is associated with:

“‘Her kings, moreover, her stewards, her dignity, her primacy, her stability, her establishments, her supports, her destructions, her warriorship, her charioteership, her soldiery, her principality, her high-kingship, her ollaveship, her mead, her bounty, her ale, her renown, her great fame, her prosperity, from the centre position.’”

Lower your gaze to look down at the ground, and visualize the realm of the Sea and the underworld that lies beneath the earth you are standing on. Slowly allow the power within you to come to rest and subside. 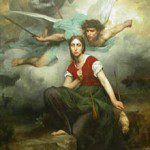 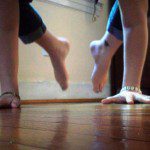 May 28, 2013 The Busy Witch: Learning to Fly
Browse Our Archives
get the latest from
Agora
Sign up for our newsletter
POPULAR AT PATHEOS Pagan
1