For the first time since I was a teenager, I am reading through Frank Herbert’s Dune series. I reread Dune a couple of months ago, and was struck by the many things that I missed while reading the book as a teenager. Still, I recognized how impactful Dune had been to me at the time, even if now I am capable of critiquing it in a way that I would not have understood then. This past week, I breezed through both Dune Messiah and Children of Dune, and I am now beginning God Emperor of Dune. Coming back to these books has brought back the impact they had on my young psyche, and the role they played in my development.

When I first read these books, I was a Jehovah’s Witness. Granted, I was not a very good or faithful Jehovah’s Witness, but I did define myself by my relationship with that religion. The whole Dune saga presents a deeply suspicious view of religion, while simultaneously recognizing its great power. The struggle that plays out across the books is largely a religious struggle, an argument playing out several positions on the freedom of mankind. As a young man struggling with my religion, these books helped to deepen my sense of suspicion and distrust for the dogma that I was immersed in.

My reasons for leaving the faith that I was raised in were entirely my own. However, these books helped me to understand an alternative. They gave me a strange kind of hope. It was a cold, analytical hope, but it was still a hope. If nothing else, the novels that I read showed me that there were other ways of living, that were other things that were true, and this was an idea that clashed utterly with Jehovah’s Witness doctrine.

Many Pagans have spoken of the role of literature in their coming to Paganism. The books that we read as children, science fiction and fantasy, informed the ways we relate to the world, and when we found Paganism, well, for many of us it was a homecoming. I have to say, however, that for myself, literature did not lead me into religion. If anything, literature lead me out of it. By my late teens, I no longer thought of myself as a Jehovah’s Witness, and for several years, I consider myself to be something like an Atheist.

My love of literature took me very far away from religious belief. The Hobbit is one of the first books I remember reading, followed quickly by The Lord of the Rings. I return to these books regularly, and reading them again is like slipping into a well worn sweater, comfortable and warm. They do not, though, stir any religious feeling. If anything, they remind me of why I left religion in the first place. These books remind me that there are other truths, that there are other ways of being, that there are so many different ways of looking the world, of understanding the complexity of life.

Books plant seeds. When we read, we open ourselves up a bit to the strange influence of others ideas, and they lay dormant inside of us. The influence of books depends on how nurture the seeds they plant. For me, the literature of my youth led me away from religion, because that was what I wanted it to do. My own experience, my own understanding, took these books which for many were a clarion call to faith, and turned them against religion. My experience of the literature of science fiction and fantasy was a liberation from religion.

Neopagans assume that there is a dynamic relationship between fiction and their own lives. They see their experiences reflected in Arthurian legend, J.R . R. Tolkien’s Lord of the Rings trilogy, and ancient Greek myths. They react as if the boundary between fictional and real worlds is fluid, and their ritual work draws heavily on the fantasy novels and myths they are familiar with. (2001, p. 170)

Fiction definitely had a great impact on my life, as it continues to do. Looking at my life and my relationship to the books that I love, I can largely agree, personally, with Pike’s commentary. However, in the end, I was not brought into Paganism by these delightful fictions. If anything, the same suspicions that I experienced in my youth, directed then toward the faith of my upbringing, remain. I grow nervous when people appeal to these beloved friends of mine as support for their belief and practices, not because I doubt the sincerity of their belief or the efficacy of their action, but because I wonder how we could have read these same books and come to such different conclusions.

In my understanding, the boundary between fiction and reality is fluid, but only in as much as we allow fiction to open us up. A good book should leave us changed by the end of it, it should have touched something inside of us and shown us something we would not have experienced otherwise. For me, the literature of my youth showed me possibility, change, and variation. I hope that we, as Pagans, can continue to understand how important possibility really is. 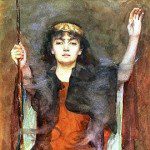 November 21, 2013
Loop of Brighid: Bride, the Cailleach and Nicnevin
Next Post 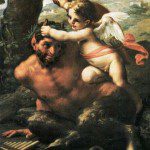 November 25, 2013 Seekers and Guides: Your Mileage May Vary – Embracing Contradictory Truths in the Craft
Recent Comments
0 | Leave a Comment
"I found myself more attracted to High Majick because it is cerebral. This does not ..."
Brenda Keitt Pergamum Unfurled: Review – Scott Cunningham’s ..."
"This is a beautiful elegy for the love you shared with each person and creature. ..."
Badgergrl Phoenix Rising: Cerridwen’s Cauldron – Dealing ..."
"This was a cool way to celebrate. With increasingly widespread vaccination there is no reason ..."
kenofken Between Two Worlds: A Covid Beltane ..."
"Thank you for reading!"
Martha Kirby Capo The Corner Crone: An Altered State ..."
Browse Our Archives
get the latest from
Agora
Sign up for our newsletter
POPULAR AT PATHEOS Pagan
1