The Cartomancer: The Art of Curiosity

The Cartomancer: The Art of Curiosity August 12, 2015 Camelia Elias

A pack of cards is like a cabinet of curiosities. You find the same objects in it, but every time you open it the arrangement is different: ‘Eating your own tears’ is not the same as saying, ‘The Witch is cooking her magic brew.’

In the first instance I have imposed on the cards a mundane, straightforward reading, in which I simply associated the cards with the cunning-folk system I’m working with, in addition to observing what happens in the cards at the visual level – for instance, the 5 of Diamonds equals the body and fire, the 7 of Spades tears, and the Queen of Spades a sharp and cold woman.

In the second instance I have imposed a magical reading on the cards – in which the Queen of Spades is the witch, the 5 of Diamonds her kitchen, and the 7 of Spades her hexing. Same cards, different narratives.

Which reading applies is always given by the context of the question, as without a question there’s no divination. Here, it has always been my contention that reading cards is a matter of contemplating images, rather than interpreting according to any one set of meanings that someone somewhere has arbitrarily decided upon. Some card readers resist the idea that contemplating the geometrical arrangement of elements on the playing-cards or the pip cards in a Marseille Tarot pack is possible, calling for the imposition on the cards of traditional meanings related to the various cartomantic systems we are familiar with, but the truth is that what we have come to know as ‘meanings’ connected with these cards come from logical stylizations of the cycles in nature that cunning folks have made.

One of my friends, cartomancer extraordinaire, Enrique Enriquez, teaches a simple method: ‘Lay down three cards, and just look. Don’t state an opinion about what you see. Just look.’ He then asks: ‘What is happening in the cards, and how does what you see make you feel?’ I find affinity with Enrique’s approach, as his questions are the same questions that I’ve been teaching every semester in my critical theory class at the university since 1998.

Does what we see in images or the verbal texts that depict an image make us smarter? It does. But there’s a catch. You cannot see anything worth the while unless you approach the image or the text from a position of curiosity that’s devoid of prejudice. In contemplating an image we look at what’s there, what stares us in the face, rather than at ourselves. We may see our situation reflected in the cards, but, as a general rule, if we want an honest answer to our question posed to the cards, we must begin with looking at the cards, not with looking at our own good selves. That’s the art: To let our curiosity do the reading, and in that reading discover that we may possess a different cultural competence than the one we bring to the fortuneteller’s table.

One of my favorite poets, Serbian-American Charles Simic, made an apt observation about what we do when we engage our curiosity in an encounter with chance in his critical study of American surrealist artist Joseph Cornell, who was famous for making mysterious boxes of found objects:

What Cornell sought in his walks in the city, the fortune-tellers already practiced in their parlors. Faces bent over cards, coffee dregs, crystals; divination by contemplation of surfaces which stimulate inner visions and poetic faculties.

De Chirico says: “One can deduce and conclude that every object has two aspects: one current one, which we see nearly always and which is seen by men in general; and the other, which is spectral and metaphysical and seen only by rare individuals in moments of clairvoyance …”

He’s right. Here comes the bruja, dressed in black, her lips and fingernails painted blood-red. She saw into the murderer’s lovesick heart, and now it’s your turn, mister.

What enables the fortuneteller to look and then pass judgment on what she sees is her ability to rise above the suspicious glance. Her business is not founded on rhetoric of suspicion, but rather, on curiosity, cunning-ness, and courage.

But this is my idea of an articulated philosophy of reading the cards. What if I left it up to the cards themselves to answer this question: ‘What is the best way of looking at something?’

A beautiful set of three cards have graced my parlor:

The Tower, The Priestess, The Hanged Man

I’m rather glad to see that all three corroborate my theory, yet adding a world of subtleties to what I was saying.

As the Priestess contemplates from some distance the busted Tower, observing that man-made constructions don’t last, the Hanged Man suggests that we must let it all hang, all our possessions, that is. The best way of looking at something is seeing it both as a construction and as its dismantling. You may have a book in your hands that teaches you a method, but when it comes down to it, you contemplate on what you see, not articulate what you read in a book. You do what the Priestess does here: Hold the book, but look past it. Suspend your customary ways of seeing, suspend what you think you know, and with your head in the ground, like that of the Hanged Man, venture to see the world upside down.

The Priestess mediates between brick and bone. The Tower’s flaming hair becomes the mystic’s coiffe. As to the book, so to the reading.

The Cartomancer is published on the second and fourth Wednesdays of a month.  Subscribe via RSS or e-mail! 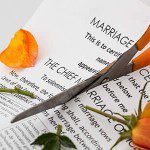 August 13, 2015 Birthing Hereditary Witchcraft: Pagan Parenting and Divorce
Recent Comments
0 | Leave a Comment
Browse Our Archives
get the latest from
Agora
Sign up for our newsletter
POPULAR AT PATHEOS Pagan
1