The Rantin’ Raven: How to use a Pendulum for Dowsing and Divination (Book Review)

The Rantin’ Raven: How to use a Pendulum for Dowsing and Divination (Book Review) February 6, 2016 Dana Corby

When I opened the padded envelope I expected to see a book. But no — it was a box. Folded inside was a large piece of heavy paper printed with trisected circles of various colors. Under that was a black plastic tray containing the cutest little tooled-brass pendulum I ever saw, on a brass chain. Impressive. And under that, finally was the book, also impressive, with its beautiful full-color cover.

And then, I opened it.

Oh dear. I’ve shown this book to six different people from various walks of life. They all agreed that whoever designed it ought to be disbarred or whatever it is they do to incompetent designers. The paper is pale gray. The print is medium gray. The typeface is thin and spindly and disappears into the gray of the paper. Reading it is impossible without strong daylight and even then it’s a struggle. All that makes comprehending and retaining what’s read difficult, to say the least. It gave me eyestrain, and the eyestrain gave me headaches. I was tempted to drop it over the side next time I took the ferry. But, I promised to review it, so here we go.

As with most instruction books, How to Use a Pendulum starts with background. I had a real problem here, and in some other parts of the book, over the lack of references or citations for many of their claims. While they do mention literary sources within the text, they make claims about other ‘facts’ with no back-up at all. Where, for instance, did they get the idea that the earliest symbol of the Sun was a hole poked in the sand with a stick? News to me. They also make claims about the nature of divination that I flat-out disagree with, in particular that every time you have a flash of intuition you’re ‘in divination’ or that divination is a state of being rather than the act of information-seeking it actually is.

Included in this chapter, though logically I think they should have been in Chapter 3, are meditations the authors deem essential to pendulum dowsing. They’re a bit different from, though similar to, the standard ‘Up through the feet and out the Crown Chakra; repeat’ that most of us fall back on most of the time. They call this ‘entering the divinational space’–again, on the theory that divination is a state of being–but as long as we don’t get hung up on that they’re nice balancing meditations, one for sitting and one for standing. But all that can be ignored if all you want is to learn how to use a pendulum. In fact, if that’s all you want you can ignore the whole book except for Chapter 2: Learning to Use the Pendulum. This is actually an excellent technique, if explained a bit pedantically and in far too much nit-picky detail for my taste.

Then there’s Chapter 3: Tuning Yourself to Your Pendulum, which instructs us on the proper way to hold a pendulum. I always got good results just holding it any old way, but it certainly couldn’t hurt to pay attention to the energy various hand positions create. After all, there’s the whole language of mudra–sacred gesture–in Yoga. This is where I think the meditations from Chapter 1 logically belong, just before the set of physical exercises to strengthen and limber the hands, arms, shoulders and neck.

Over half of the book is actually about spiritual & psychic color-theory, the specialty, according to the bio on pg 160, of co-author Vernor-Bonds. The sheet of colored circles turns out to be called ‘Instant Charts’ (I tend to think of them as targets) over which you suspend the pendulum, with different colors representing different topics, and different shades within each color representing different results. There’s also a large ‘General Chart’ of many colors that I have so far, and despite the long list of instructions for its use, found primarily helpful in deciding which of the specific charts I want for a given question. I found it interesting and helpful that Work, Money, and Opportunity are separate topics in this system instead of being lumped together as they usually are. I tried asking one of my test questions, about my writing, first over the Work circle, then over Money, with no results. But when I tried it over Opportunity, the pendulum woke up in my hand and started talking! And, in retrospect, what I was asking about was an opportunity.

Following the sections on the colors is a section called ‘Using Your Instant Color Charts Intuitively’ and again, the basic instructions for using the pendulum are redundantly included. Following this are several pages of what they call ‘Intuitive Color Keys:’ basically, tables of correspondences for all the colors. You’re supposed to flip back and forth between the tables and the color chart you ‘intuitively’ chose for the question until you get your answer; I cannot imagine a less intuitive procedure.

Chapter 6: Pendulum Healing is the shortest and most to-the-point chapter in the book. It includes sections on Chakra balancing, house protection, and allergy testing, all of which are interesting and potentially useful. But why so short? You’d think there would be a lot to say here but it’s just eight pages.

And finally we get to Chapter 7: Dowsing. This is what most people jump to when they think of a pendulum, including me. I’ve had results dowsing over maps that amazed me, once even finding the residence of a criminal the police didn’t want to look for. As before, this chapter goes into considerable theory, discussing Schumann waves, sunspot cycles, and the human auric field. And as before, there are frustratingly few references to their sources. Even when they mention someone in particular, they neglect to mention book or paper titles. The paragraphs on sunspots, for instance, mention only that sunspot effects were researched in the Soviet Union in the 1950s. But I know there has been considerable research on the connection between sunspots and psychic energy since then, and in other countries. Only one person, a Dr. Alexander Lowen, is mentioned in connection with the auric field when–my god!–this is a huge topic. There is one page on the various types of pendulums traditionally used for dowsing, when this, too, has an extensive and lively literature. Dowsing for water, tracing ley lines, and locating lost items, all traditional uses for the pendulum and topics most readers must surely want to see explored in some depth, are given equally short shrift. While there are several good pages on Map Dowsing, it’s as if the authors used up all their energy and interest in the earlier chapters and just sort of tossed off chapters 6 and 7–the ones everybody would want to read–in a hurry. What a shame.

The book concludes with a two-page Appendix: Professional Readings in even smaller type than the body of the book. Frankly, I didn’t even try to read it. That’s it. No bibliography or other references. Short bios of the authors (Vernor-Bonds never does tell us what PMIAC stands for) and what’s usually the front matter–acknowledgements and the like–are on the last page.

Would I recommend How to use a Pendulum for Dowsing and Divination? Frankly, no. It’s a beautiful package and a bargain at $22.95. It’s an interesting system unlike anything I’ve seen before and I probably will use it, and I absolutely adore the little pendulum. But because of the unreadability of the design and what I consider serious flaws in the writing of the book – repetitive and heavy in some areas and sketchy in others, and poorly organized to boot– it was thoroughly annoying. There are lots of good books on pendulum dowsing out there that won’t give you a headache. 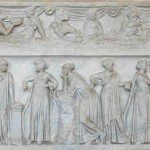 February 5, 2016
Adventures in Wortcunning: The First Groupies
Next Post 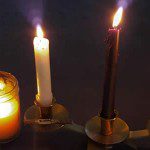 February 8, 2016 Star Made Witch: Riddle Wisdom
Recent Comments
0 | Leave a Comment
"This sounds really interesting. Thanks. I love witchy book reviews. Books are always a wonderful ..."
WildestSea The Corner Crone: The Hedgewitch’s Little ..."
"These are great gift ideas! Useful for any occasion."
WildestSea Phoenix Rising: Last-Minute, Easy Yule Gifts ..."
"I read an article about not giving gifts to adults at Yule and other occasions. ..."
I. H. Hagar Phoenix Rising: Last-Minute, Easy Yule Gifts ..."
"Such an interesting read!"
Patti Annelle Patten Pan-Celtic Hoofbeats: Horses of the Dark ..."
Browse Our Archives
get the latest updates from
Agora
and the Patheos
Pagan
Channel
POPULAR AT PATHEOS Pagan
1