It happens that on occasion I use the cards to predict events. Nice, old-fashioned style. If chance and probability are to make sense, especially for the ones scientifically inclined – I don’t worry about the magic folks – then it is through feedback.

You predict an event, and you’re only as good as your last successful result. That is to say, either you get it right, or you don’t. In fortunetelling prediction is the most brutal of the arts. If you don’t get it right folks are ready to lynch you. But the art of prediction is also the most wonderful, if you, like me, don’t believe in time, causality, and all the other words we use for convenience, such as temporal markers. If you don’t believe in time, you’re free from having to take anything personally – ever. Hallelujah!

Prediction requires a blind faith in your tools, be they gods, cards, stones, omens, bones, or stars. As it happens, while I believe in nothing – I keep telling folks that I’m a Marxist – I have faith. A lot of it.

Why I have faith is connected to my nondualist approach to all things, and the kick I get out of using dualist language to confuse others: I say, ‘yes, things are black, yes, things are white, but wait, there is no black and white, there’s only the associative, the symbolic glyphic or glottal ability of my language, and so on.’ Folks go, ‘Err, here’s another madman’ – or woman.’ Wonderful.

But let me get to the point. Two days ago I decided to predict the finals for Euro 2016 soccer championship: France versus Portugal. I did a three-card reading with the Lenormand cards for each team. I posted it duly on Facebook for all followers to see, exactly 1 minute before the whistle blew for the start of the game. As prediction needs witnesses, this is what I said on my illustrious profile wall connected with these cards below:

“What the heck, let’s do a predictive reading. Who wins the soccer finals?

Top row for France: The Ship, The Birds, The Letter.

The French are slow, talk too much and get the red or yellow card. Meh.

The bottom row for Portugal: The Whip, The Child, The Sun.

They Portuguese are aggressive, dribble in unexpected ways and win.

I bet on Portugal. Good luck.”

So Portugal won, and I got showered in praise – too bad about the impossibility to push virtual champagne on the internet with the same results as having your body praise you for the good choices you make. . . Still. It was good to see so many appreciate the art of prediction.

Now, however, while I was grateful for people’s excitement over my skills, the very idea of prediction made me ponder over a few things. I won’t repeat here what I’ve been saying about prediction in my divination books, on Taroflexions or on my professional website, The Art of Reading. I will just make a quick reference to what I said in the immediacy of the event, when people have asked me about timing in prediction, and what the deal is, when, I, indeed, don’t believe in temporality.

Prediction works like a quick arrow. You have to have a very specific and immediate target if you are to get it right. The longer the time frame, the less predictable the outcome. Getting close to being right is not good enough. As I said, prediction is brutal. Either you get it right, or you don’t.

Prediction also depends on the question. If you ask: ‘Who will get married first, me or my sister?’, then you can have a time span that’s as big as 30 years, not just 3 months. You can only assess the point of prediction to the extent that it aligns with the nature of the question. That’s the art. Or rather, that’s where the art of timing is.

Prediction is close to what happens in mathematics when we talk about infinities that tend to the margins of ‘things’ and then get weird. I won’t bore you to death with what in math is called complex analysis, but I will urge you to have a look at a Mandelbrot fractal. The longer the infinity stretch, the weirder it gets – ‘weird’ is a math term – with the lovely symmetry to begin with getting all distorted and funky.

Here’s a thought aside: ‘Enchant Long, and Divine Short (Peter Carroll, Liber Kaos, 1992: 25). Keep your long term magical projects for enchantments. Divination is for snappy things. You want that elastic to make it or break it.

If you’re a hardcore practitioner of weirdness, such as it is also preached by the Dzogchen school of Buddhism, then you will get the notion that as the cards are never about you, but rather about all that you’re part of already – which you know about, otherwise, no catch – then you understand that prediction runs counter-intuitively to all that which we call ‘the future.’ If you don’t believe me, you can check with the Harvard bros on Wall Street, who happen to enjoy a better reputation than that of a fortuneteller for doing the exact same job – minus her sophistication. Or you can also have a look at my essay, How the Tarot Works, to get the idea.

Predicting is the art of seeing without prejudice. That’s really the best recipe I can give you. Suspend all your judgment when you predict, and see how far you can see beyond your cultural pre-conditioning. If you can do that, you can call me next time you had an 8-figure profit at the stock market, or indeed, the ultimate profit that translates to your seeing things as they really are.

People into esoteric tarot, rather than straight fortunetelling, hate prediction simply because they are not trained in the art of never ever taking anything personally. When I say ‘never ever,’ I mean exactly that, for that is the catch. In tarot for prediction, if you think the cards are about you, about being personal, or about taking anything at all personally, then you’re in the wrong line of business. If you can’t take defeat – OMG, my prediction turned out all wrong today, I’m so ashamed! – then divination for prediction is not for you.

Next time you want to predict something, you may want read a poem, or another madman’s words. Here’s an example from Khalil Gibran:

“You ask me how I became a madman. It happened thus: One day, long before many gods were born, I woke from a deep sleep and found all my masks were stolen – the seven masks I have fashioned and worn in seven lives – I ran maskless through the crowded streets shouting, “Thieves, thieves, the cursed thieves.” Men and women laughed at me and some ran to their houses in fear of me. And when I reached the market place, a youth standing on a house-top cried, “He is a madman.” I looked up to behold him; the sun kissed my own naked face for the first time. For the first time the sun kissed my own naked face and my soul was inflamed with love for the sun, and I wanted my masks no more. And as if in a trance I cried, “Blessed, blessed are the thieves who stole my masks.”

In your prediction, go not to the infinity of time, but to the zero of time. Let your prediction be the most natural solution that will lead to you singularity, the singularity of the single event that comes to pass just as you said it would. Get rich – on all fronts.

More weird stuff, or predictions that knock your socks off? 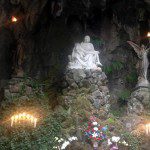 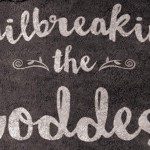 July 14, 2016 Outside The Circle: Jailbreaking the Goddess
Recent Comments
0 | Leave a Comment
"Yes, thats why its called Patheos: Pagan. Patheos is a multi belief website with blogs ..."
Michelle Gillian The Dance of Pagan Recovery: Welcome ..."
"Simply vile and disgusting how a supposed catholic website or blog is fooling its readers ..."
Luis rodrigues coelho The Dance of Pagan Recovery: Welcome ..."
"What's kind of kooky about being disabled and invisible, or different and invisible, is that ..."
JenniWest The Corner Crone: Why Are You ..."
"This really sounds interesting. Health is so important."
WildestSea The Corner Crone: The Witch’s Guide ..."
Browse Our Archives
Related posts from Agora