Outside the Circle: A Pagan at a Gun Range

Outside the Circle: A Pagan at a Gun Range November 11, 2016 Danette Wilson

Paganism and guns isn’t something you see an article on very often. We Pagans love our wheel of the year and moon cycles, and magic as well as our love of nature and harmony with everything. I love my athame, and sword, but I would never consider ever using either besides in ritual. So, what was this Pagan doing at a gun range?

Well, I decided to get way outside of my usual and was invited to go shooting one afternoon, to see if I could shoot and to assess my proficiency. Truth be told before this, I had never held a gun in my life.

It was also one of the strangest days of my life, and here’s why.

Guns have always scarred me. Statistics of deaths and violence aside, I have never felt the need to shoot one, carry one or ever own one. I can say with all honesty “know thyself,” I would be horrible at and would not ever consider being in Law Enforcement or the Military. I also detest the video games that let you shoot and cringed whenever my husband or son were actively shooting in them as I hurriedly left the room. It just was NOT my thing.

Oddly though, I love movies and at one time the more action, the better. But going to a range changed everything about the way I will look at movies now, forever. The biggest change, is realizing all the fake that exists in them, and after holding one and shooting firsthand I can make the observations that are the hallmark of either the real thing or Hollywood.

Going to the range brought up a lot of things also, that surprised me, like looking strangely at the man who brought his 10 year old son. I couldn’t help thinking about my son, at his age, with all his friends playing legos and matchbox racers. “Why would anyone bring a child to a gun range,” I thought.

There were hardly any women there, and I do not mean that to be sexist, but the guys way out numbered women. I couldn’t help but put them all in perspective too, wondering what they did for employment, and whether they were married, had kids, what kind of parent were they, did they ever shoot animals?

Once at the desk it became immediately apparent safety was a serious issue there. I had to appreciate that. Turns out, you can’t even rent a gun unless you are with someone. Only if you are already a gun owner can you come by yourself. I did not know this, but learned that this is to prevent someone coming alone renting a gun and committing suicide. Apparently before they made that rule that’s what happened, but if you are already a gun owner you must be responsible enough to have maintained that gun so are considered less of a risk.

No background check was needed, but a test was given after we had been told to read over some pages in a binder with a ton of rules of behavior protocol at the range, as well as everything you needed to know about handling guns and loading and etiquette, inside range, outside range, ammo, I was on gun overload. I got 100% on my test.

As we looked to select our rentals, I couldn’t help but notice the Tuesday Date Night advertisement and I laughed. Chris, behind the counter set me straight, that this was a popular thing. But I still think it’s weird that couples would come to a shooting range on a date, sorry, chuckle. Then my mind wandered to what kind of guy would ask a chick on a shooting date and whether I would even date this guy to begin with.

Yes, there were a lot of emotions and feelings that I never thought would emerge from simply going to a range one afternoon with my husband. He does not usually go, but had taken a few classes and highly recommended learning if I was interested. I was here to see if I was.

The weight of the 38 special was heavier than I would have thought. All of a sudden, granny carrying this in her purse floated through my head, and I seriously wondered how anyone carries this around looking normal or comfortable.

The smell that hit me as I went into the actual shooting range in that huge room of bowling alley lanes and people shooting was so intense I wanted a mask. The other thing that really shot through my entire body was the noise with each gunshot from people shooting all manner of equipment. I will never forget the noise. There was a quick moment where I wanted to cry like a little girl and just run out of the room entirely, giving the whole thing up, but that was overcome by focus as I listened to and watched my husband show me how to open and load the gun and aim and focus on the target. Soon, after watching him a bit, it was all mine. I went outside my body and became more relaxed as I just practiced and went with the flow. I was also aware of being engaged in how my accuracy was, so he reeled in the target paper to check. We started using different marks on the sheet to analyze my area vs. his and I was surprised to find I did better than I even thought. But there were still some shot holes that were way off the target.

One of the biggest issues that hit me with all of this, was really analyzing owning a gun, and whether a person is even psychologically prepared or responsible over grabbing that owned gun in a heated emotion after argument or an impulsive act of defense or perceived justice.

Although my target practice was not moving, a conversation, later with an older gentleman let me know that moving targets put an entirely different spin on your proficiency, and my mind immediately wandered to what the real world must be like for any Police Officer, especially when they are threatened and not the only one with a gun.

Yes, even though this afternoon took me outside my comfort zone, I was left with an entirely different perspective as well. I do recommend this to anyone who has never handled a gun. No one should be sheltered. I don’t think I would ever bring children, and I don’t know if I will ever return.

The experience definitely left me considering so much I had not thought of before. Including statistics such as:

Hillary Clinton called for the reversal of a law that protects gun manufacturers from liability in lawsuits over shootings. She’s also proposed taking executive action to end the loopholes that allow gun show sales and internet sales to escape background checks.  She has, additionally, called for a ban on the sale of assault weapons, as well as the closure of the “Charleston loophole” — a reference to a law that allowed the Charleston church shooter to obtain his firearms. Closing that loophole would mean extending the window for FBI background checks to take place on gun purchases.  And, she pushed for comprehensive background check legislation, which would include banning all domestic abusers or the severely mentally ill from buying or possessing guns.

I know it’s our second amendment right to have a gun, but I will not feel cheated never exercising that right. 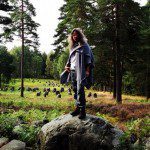 November 9, 2016
The Cartomancer: Four Steps to Fearlessness
Next Post 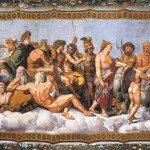 November 11, 2016 Happily Heathen: The All Gods Event
Recent Comments
0 | Leave a Comment
Browse Our Archives
get the latest from
Agora
Sign up for our newsletter
POPULAR AT PATHEOS Pagan
1