Lamp & Labyrinth: Conceptualizing a Multitude of Spirits May 1, 2017 Chris Godwin

The word inspiration comes from the Latin word inspirio, which means to become inflamed, or to be blown upon. Spirio is seen by linguists to be from a word like the reconstructed Proto-Indo-European word *(s)peys. Inspirio is also the root word of spiritus in Latin and spirit in English. If we consider the many literal and figurative meanings these words carry, we can safely reconstruct our theology using them.

In this exploration we will no doubt be establishing parameters of our polytheism. Parameters vary wildly from tenets or doctrine. Parameters are variables which can change, and since Our Magic is an orthopraxic one where we have the machinery of practice, and the results rendered will yield a different output based on what you’ve plugged into the parameters. Here I simply state what data I plug into the parameters of my polytheism. One may even call these my Polytheistic Values. Within any system, some values are given while some remain immutable. Some of these should be obvious, but here they are in order of importance.

Given Values Useful to Theological Discovery

A person who puts blind faith in, and it need not be total trust, the things they’ve seen in the Otherworld is an utter fool.

Regarding Given Value 3 above, like language all information has a certain signatureof entropy and complexity. Read entropy as “Average Uncertainty” coined by Claude Shannon, who shows that if fewer questions are needed to predict the next iteration in a pattern, then the system generating that pattern contains less information. So when thinking about our paganism and polytheism, if it can be told and studied quickly, if it is as round as a circle, and quartered like a clock, and is easy to guess the next principle based on a few common expressions, then it has less information. If it is asymmetrical, odd, and hard to predict, it must contain more information. These concepts from information theory apply, methinks, to folks resurrecting, recreating, and reconstructing religions from the past. The paganisms of iron aged Europe were wholly bound to the language, arts, laws, and cultures… so these are the things we must look at and model our theology after if we wish it to become what it once was in a modern context. A whole tribe’s religion would have to contain enough complexity that it provided all varieties of minds with what they needed from it. If your paganism, modern or old, isn’t all messy and hairy and instead resembles a puzzle, it has almost no entropy. It would be a religion of certainty and, therefore, has implied goals of satiating fear in my mind. The entirely critical mind faces oblivion and nihilism, in actual consideration, and pushes though into theism. Satiating fear, a healthy skeptic does not do.

A whole tribe’s religion would have to contain enough complexity that it provided all varieties of minds with what they needed from it.

As offensive to some as it may be, perfectly aligned geometrically sound religions seem the most made by man and the least made by natural process. We find that organic spirituality is better than artificed. Asymmetry, odd numbers, fractals, and self similarity from one order of magnitude to another are additional subterranean values which we hold, often unrecognized, which we’ve come to associate with deeper, longer flowing wells. That is to say, traditions and religions made by many minds, for many more moons speak to us in a way that matches the inner fulfillment of more people. These are the given assumptions with which we approach the problem.

What is a Spirit?

The likelihood of respiration being required for a person to be classified as a spirit, is low. Figuratively something that breathed had life and in Latin we can see that in the etymology presented at the beginning of this article. However, we cannot see into the latin language deeper toward a proto-indo-european origin. The polytheist PIE Yamnayan herdsmen who indirectly invented nearly all the polytheisms of europe had animist roots. Their understanding of a spirit goes beyond some hypothesized shift from animism to holding gods close to their beliefs. In my personal theories, those folks didn’t have much difference between spirits and gods, until they established nobilities of their own and that was reflected in their religion. But before that, I envision that the existence of spirits existed through the practice of ancestor worship. Out of the three Kindred of gods, ancestors, and spirits, the ancestors no doubt became the first to be honored. I think the evidence is there in the language too, and that the first spirits were ancestors, and their breathing or not breathing was big deal. I see a ton of associations with spirits of the dead and the wind as well, as if their breath continues when the leave, arrive and altogether visit us. In the Fairy Faith, the Sidhe folk are sometimes the spirits of the dead.

On the other hand, a spirit might be what we perceive when we do certain breathing practices. Holotropic breathing practices, though modern, scientifically generate entheogenic experiences. In my own breathwork, and even in entheogenic practices I’ve done in the past affected, I experience other beings which communicate to me. Changing the breath affect sleep patterns and dreaming. Alan Watts says that the breath is interesting because of its involuntary and voluntary nature, he says about its uniqueness: “On one hand you are doing it, and on the other, it is being done to you.” And in the nature of that secret, you find the boundary between you and not you. In our mysticism, the psyche is filled with many other spirits and phenomenon other than your consciousness. Joseph campbell would say that this is the special world in which the hero of the monomyth descends. A polytheist Irish-style american druid like yours truly might say that this space is your own yard in the otherworld. That means that just beyond its edge you’ll find bounded, the otherworlds where the gods and spirits are.

Are the spirits things in the otherworld, this world, our mind, or archetypal things? Yes. 42.

Embracing paradoxes, our kind of paganism includes all the dualities that illumination brings. The gods exist, and they don’t. The otherworld is your mind, and it isn’t. We’re all one isolated system of expression, we are dismembered and utterly alone and separate. These aren’t opposites which cannot coexist. When the File(Poet) or Draoi(Druid) reach Imbas, or put their thumbs in their mouths, they seek to dismantle the curtains of perception which filter our senses into this symbol structure we call a worldview. Sipping from that well, one cannot see North and South, Positive and Negative as separate things but rather, interlinked extremes in a system of complexity. Why is this relevant? Because asking certain questions framed in a way which prejudges the thing you’re trying to discover is a problematic approach.

In my personal experience there is no difference between your mind and the otherworld, the things in it and the things outside it, and you. It is a landscape that contains all of these things. It is a real place made of spacetime of the realest sense. It simply doesn’t have the same rules and has no doorway in the philosophically defined material world, which may not even exist. Material is a symbol, we’ve dug into matter and still we can’t find anything but information which isn’t solid, and instead floats in off/on/halfsies type states. I hardly call that material, and it is the least of what Matters.

If there were no respiring beings on earth, would there be a spirit? Sure, the spirits of other living things and the living earth which respires in a different way. It is important that respiration is how we recognized spirit first and how we see spirit.

My Otherworldly journeys are mostly induced by fasting, sleeplessness, ecstatic practice, and plants rather than guided imagination work. I really have a hard time imagining a scene, populating it with characters, and coming away from that not feeling like I’ve spent an hour talking to myself. When I try this work, the gnosis I walk away with is what you’d expect from talking to yourself. To me, spirit happens to you and you’re learning the entire time. I can now use imagination work to a degree of worth, but only after I kicked the door open with entheogens.

When over there, beyond the veil, there are many places, many membranes you can penetrate, and certainly an infinite amount of layers to explore that are as real as this reality when you’re there. In one place, a place I felt was the sacred center of all the worlds, was where the mead of wisdom was.

I partook of it and saw what I am calling the Multitude. It was a structure of all beings in a sphere and sometimes when I see it it is a ring. Like a place where all beings are seated, visit or return to. The ring or sphere was a spectrum of all possible dispositions of persons. It is my belief that when you create an egregore, it becomes a spirit house for one of the Multitude to inhabit. In that way, Jesus exists. In that way, the indigenous thought pattern of certain tendencies and impulses belonging to other spirits fits.

If the mind is a place in the otherworld, than when the ancestors approach you can feel it. And so there is a god behind every thought that occurs to you. It was clear to me in my state, that I was immortal, and that the thing that was imortal was an eternal witness, an observer to the things that I experience. The Multitude is simultaneously all the cosmic machinery that happens to you and the beings that inhabit said cosmos. Another word for the Multitude is the Kindred, to use an ADF specific term. A bit of information is a bit of consciousness, and that is a god. That is a spirit. Any enduring process with cycles is a spirit. 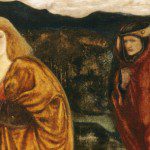 May 1, 2017
The Other Side of the Hedge: Teachers & Students
Next Post 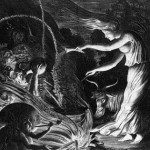 May 3, 2017 Star Made Witch: 13 Steps for the Witch Decluttering Spell
Recent Comments
0 | Leave a Comment
"My mentor once told me, when I asked about fairies that when he was young ..."
David Hogan Irish-American Witchcraft: Why the Roots of ..."
"The Facebook thing has many facets but the political Facebook thing is about freedom and ..."
JenniWest Between Two Worlds: Dark Moon, Tarot, ..."
"Thank you."
Willow Rose The Corner Crone: Who Do I ..."
"Thanks! I was off "temporarily" for one lunar cycle and didn't miss Facebook..at all. So ..."
Brianne Raven Wolf Between Two Worlds: Dark Moon, Tarot, ..."
Browse Our Archives
get the latest from
Agora
Sign up for our newsletter
POPULAR AT PATHEOS Pagan
1