The Cartomancer: Fear of Words, Love of Labels

I watch a youtube video for my cartomancy students that can prove a point I was making in class last week.

The point was rather a bold claim that if you’re afraid of words, you won’t make it as a card reader. This was offered in a discussion of why precisely we can ditch all card ‘meanings’ and simply go with what we see.

This is easier said than done, however, as most of what we see is actually the result of habitual patterns of thinking. Seeing is an actual art, especially when it’s based on displacing the idea that there’s meaning.

And this is exactly what we do when we read cards: We displace meaning, not co-create it in our own image.

From a cultural history point of view, I can see why the cartomantic world, and for that matter the pagan world too, has been invested in meaning, insisting on it too.

If you can’t make it as a male Harvard graduate, then you must find meaning in being a witch, in being a healer, a shaman, or a 6-figure entrepreneur dealing in the magical arts.

If you’re denied being a woman, the time comes when you will want to reclaim your power. You must have meaning. All these centuries of men having meaning… Now it’s your turn. You think.

In reality, just as the Harvard graduate is nothing but a concept, so are all the other societally non-consecrated and non-endorsed professions. Concepts are not reality. This is both a scientific and a ‘spiritual’ fact.

So we can relax.

But why do we insist on clinging to labels? Saying that you are this or that presupposes a reference point that doesn’t exist.

My theory is that it’s because we’re afraid of words.

We’re afraid that if we lost the ‘meaning’ of ‘I love you,’ or ‘I love myself’, all would be lost entirely. But why are we afraid of what we all know already is reality?

The ritual of ‘I do’ today can turn as easily into a ritual of ‘I don’t anymore’, with domestic war declared. The house wins. The courthouse, that is.

We know what words ‘mean’ and what fictions they create.

‘I love’ myself’ presupposes a body, or a body of beliefs about my value as a human being. But are these concepts not as shifting as the clouds? What body? What value?

‘I am a witch’ presupposes a reference that goes back to ritual, costume, and worship. But is sorcery not also a concept? If anything, the philosopher witch already knows that what she operates with at all times is a game of make-belief.

The magic of RE

When I hear people telling others to love themselves, what I hear is a game of ‘change your metaphor.’ Yesterday you were shit, today you can love yourself, empower yourself and be something else.

What this promise holds, however, is nothing but a game of re-naming, re-framing, re-labeling, re-calibrating. Now you’re empowered, you take no shit, give no fucks… and you’re still miserable.

Of course you’re miserable. You’re miserable because you buy the idea of hope. Hope that by changing your metaphors things will get better.

The only trouble is that the *I* is already a metaphor. The ‘meaning’ of the *I* is always postponed, deferred to a next station.

In the game of make-belief, it’s actually quite entertaining to watch yourself going from station to station. Yet, this position is dangerous, of course, because it’s a position that renders you completely beyond desire.

Not having any desires, ambitions, and self-improvement projects is rather bad news for culture. What ideologies of the self, redeeming the self, goods and stuff will culture sell us? The answer to this is zero.

The point is, to also go back to the idea I started out with, that in order for divination to function at its highest, it needs to place itself beyond labels, beyond the fear of words.

In the video I was watching, a young man of 33 approaches gypsies at a market. He wants to know if anyone can read his fortunes. No one admits that they can’t.

One of the gypsies offers instead an instant tirade: ‘You’re a fortunate man, this year is filled with fortunes for you, you’ll travel too, abroad, I think, yes, you’ll travel abroad, this year you’re so lucky.’

The young man wants to know: ‘And you can tell me all this, how?’ referring to the obvious fact that this spontaneous act of divination has no tools, no cards to look at, no palm in exchange for a glance, no crystals.

The gypsy then says: ‘This is called divination by eyes. I can tell you all this because I’m looking at your eyes. Ah, yes, I forgot to tell you, you’ll live to be 83, and you’ll have a boy and a girl. How much are you going to give me?’

Now, while we may think that this exchange is hilarious and completely beyond making any sense, what I see happening here is something of the highest: This, probably illiterate gypsy, realizes something about words and their power that the highest educated don’t.

But this gypsy here just knows that words mean absolutely nothing. She lives according to the highest principle of seeing WHAT IS: If it happens, it happens (in this case here, her palm being crossed with silver), and if it doesn’t, it doesn’t. This gypsy goes with what IS, not with what she imagines is the case.

I offered this in my classroom that others here might find worth pondering on: ‘Who is the *I* thinking that I’m thinking?’

In light of the fact that this question places us right there with the absolute and the limitless, what sense does it make to still be fascinated with the liminal, in-betweenness, and the hedge position often associated with cartomancers, witches, cunning-folk and other good folk?

I like the limitless. No labels. Form is emptiness, emptiness is form.

What the cards say? They are in agreement.

I went for a quick reading of 40 cards on the table, so there’s no temptation to look at center cards as being more significant than the others. For the mechanics of reading this particular spread with 40 playing cards on the table, I refer you to my essay: Kill your Neighbor’s Children.

Suffice to say that the method consists entirely in seeing what you see, assessing color and number progression at the most basic level – the reds are OK, the blacks not, and 1 is little and 7 is a lot. So the game of make-belief here is one that asks you to stretch your elastic of observing nothing other than the play between expansion and contraction, with the clubs marking the full stop.

Who is the *I* thinking that I’m thinking?

You learn stuff at home, until your father actually opens your eyes by saying NO. Full stop.

‘Oh,’ you think, ‘let me run to the brainy woman,’ but she also says NO. Actually she takes no prisoners. She hems you in at all your painful corners.

But this is good for you. Lots of value in her teaching, your pleasure corners are covered and you start believing in your own brilliance. That is to say, until the diamond crone hands you over to the mean one who says: ‘Not this desk-related notion of the self.’ Full stop.

‘Ah’, you go, glimpsing something about this ‘not this’. Full stop raised to the power of two. This is serious business. The interval unsettles you.

You cry. Your investigations amount to little when you realize your dependency on others and what they think. It’s your body against the world. Full stop.

You inhale. You exhale. Who are you between the 1 and the 7?

After the last full stop, the many that come into the picture are redundant.

What does that tell you about yourself? And the others ‘dropped off’ the big picture? And what picture is that?

The Ace of Clubs followed by the 7 Clubs – the first and the last in the suit – tell you that whatever is comprised in between the 1 and the 7 is a whole lot of nothing.

You can’t in all honesty see what’s between the 1 and the 7. There’s only empty space. You can guess. But that would rest entirely on yet another set of abstractions. Not reality.

The point is that we are the better fortunetellers if we’re not afraid of ‘a whole lot of nothing’ in between our words.

We’re the better fortunetellers when we don’t hold any promises of revelation of truth, of accurate ‘this will come’ simply because ‘only I know what the cards mean, I read it on the internet – but this I don’t tell anybody’ – or because ‘I imagine I have vampire blood, or gypsy blood, or Jewish blood, or Sumerian blood, or psychic blood,’ ad nauseam – ‘but this I tell, all according to what framing I’m after.’

You are not what you think you are. Hallelujah. 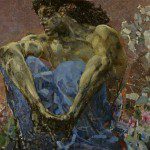 June 5, 2017
Tree City Witch: The Queen of Swords & Instructions For Your Exorcism
Next Post