Irish-American Witchcraft: The Dagda Q & A

I’ve had a lot of Dagda going on in my life in the last few months, having recently written a book about that deity and also having contributed pieces to an upcoming anthology called Harp, Club, and Cauldron dedicated to him.

Maybe that’s made me more aware of people discussing him or maybe he’s just been on more people’s radars besides mine, but it’s seemed recently like I’ve been running across more and more discussion and questions about the Dagda. He’s a great deity but also one that people can have trouble finding good information about so I thought it would be helpful to do a blog here with a question and answer format focused on him. I asked people on social media to ask me their questions, and am repeating them here with my answers.

Catherine asks: what are the ways the Dagda is commonly understood in modernpaganism that are just plain wrong or wish fulfillment?

My answer: I think there are two main ones that I see and those are the idea that he is an ‘all father’ and that he is a primogenitor of the pantheon.

The first issue comes from confusion of his name ‘Ollathair’ because people confuse the older Irish oll with it’s english homonym all. But ollathair doesn’t mean all father, oll has meanings that are closer to vast, ample, and great in the sense of size. I prefer to translate this as ‘ample father’ because of its comparison to the Latin word amplus in the dictionary, although Stokes tends to go with ‘Great Father’.

The idea that the Dagda is the father of all the Gods is likely rooted in a book from the late 20th century by Peter Berresford Ellis, who invented an Irish creation story wherein the Dagda and Brighid were children of Danu and Bile who then founded the pantheon. This has become more popular over the years but is vastly at odds with the actual existing mythology. We know who the Dagda’s father was and also who his children were, and while he was fairly prolific there were many other deities who were more so. The Tuatha Dé Danann were also not the first divine beings created into an empty world, but rather came after a series of previous beings had already existed including their own progenitors the Nemedians.

Jennifer asks: Why doesn’t the Dagda have as big a modern cult following as the Morrigan or Brighid

My answer: I think people just aren’t aware enough of him, which is a shame because he’s an amazing deity.

Anthony asks: Is it true that, as some scholars have claimed, Dagda largely disappears from the scene after Oengus deposes him of ownership of the Brú [Brú na Bóinne]? And if so, why do you think that is? Why would one of the supreme TDD figureheads suffer such an ignominious demotion?

My answer: I think, for my own part, that some scholars get too caught up in the idea of younger Gods displacing and replacing older ones. We could possibly argue that the Dagda has less or no influence around the Brú na Bóinne after Oengus takes over but stories like the Aislinge Oenguso show that he still remains a significant power – after all in that story Oengus has the Brú but must ultimately go to the Dagda for help finding Caer, and the Dagda is described in that tale as ‘king of all the Sí of Ireland’.

There are several versions of how Oengus won the Brú, and who he tricked, and in one [from the Tochmarc Etaine] the Dagda is the one advising and helping Oengus to win the land from Elcmar. Which to me says the story itself is more about Oengus and his claim to that place than the details of who he tricked exactly.

From the position of why one of the supreme figureheads would suffer such an ignominious defeat – Oengus is a clever one, and there seems to be some kind of balance in a child conceived through his father’s trickery that involved a play on time (magically holding it still) then claiming his birthright from his father with another play on time (word play re: all life going by nights and days)

Michael asks: Do you personally feel that the Dagda wore a short tunic that showed his genitals, or was that a later Christian insertaion?

My answer: that description is accurate to what iron age Irish peasants wore according to scholars like Williams in ‘Ireland’s Immortals’. There is debate among academics as to whether the description from the Cath Maige Tuired was genuine or inserted to emphasize the Dagda’s baseness (ie he dressed like peasant) but I think we need to keep in mind he was in disguise spying on the Fomorians at the time. It is likely that he did wear that but I would venture to say that wasn’t how he regularly dressed every day.

Aleja asks: I would like your best take on his close family tree.

My answer: His father is Elada which is also sometimes spelled Elatha. His brothers are Ogma, Bres [not the king], Alloth, and Delbeath, and according to some sources Nuada. His children are Oengus, Aedh, Cermait, Conan, Bodb Derg, Midhir, Ainge, Adair, and Brighid. His wife is the Morrigan, and Boínne is his lover as is an unnamed Fomorian, the daughter of Indech.

Ian asks: is there a reliable account of the Dagda as Ruad Rofessa rather than fertility god or warrior?

My answer: Personally I might argue his role as a fertility god is a bit harder to support, but sure if you mean ‘Ruad Rofessa’ in the sense of a god of wisdom/knowledge. The Cóir Anmann describes him as having ‘all heathen knowledge’ with heathen often being a euphemism for occult. In some versions of Oengus winning the Brú, as I mention above, it was the Dagda who advises Oengus on how to succeed, and in the Dindshenchas of Ailech I and II we see him in the role of king giving good and wise judgements.

My answer: there seems to be a decent amount of evidence in academia to at least tentatively support the Dagda fitting the category of thunder gods along the lines of Thor and Secullos. He carries a weapon described as a club or staff [the word lorg can be read either way], he’s associated with the success of crops and with weather, and of warriors/kingship.

Like Thor he has a myth where he fights an aquatic menace and defeats it with his staff. That said his name obviously doesn’t mean thunder and it isn’t related to thunder and in other respects he seems more like what we’d categorize as a sky deity, a la Zeus, or even similar to Dis Pater.

For my part I find that this very variety in abilities and connections tends to put me in the ‘probably not’ camp, but then I tend to be very cautious of the Classical lens and the idea of deities fitting these formats. I think arguments can be made and supported in either direction.

Seán-Pól asks: Dagda as “good god” is said to be similar to the fairies as the “good folk” and some have thought this was said more out of fear and placating than any sense of altruism etc? Thoughts?

My answer: It would be impossible to say for sure, but at least according to the mythology the Dagda was given his name in response to his pledges to do as much as other deities were promising to do. We see this in the Cath Maige Tuired where he promises in two separate places to do everything the other Gods have pledged to do in battle and they proclaim him the ‘Dagdae’ or literally good/excellent [dag] God [dae a form of dia]. The meaning of his name features in word play, such as we see in the Cét-Chath Maige Tuired where he volunteers to lead the Tuatha Dé Danann into battle saying ‘for in me you have an excellent god [dag dia].

My own opinion on it would be that the Dagda’s nature in general seems to be much more benevolent than the Daoine Maithe and I wouldn’t necessarily see a need for euphemisms with him in the same way we use for Themselves.

Seán-Pól also asks: How many names does he have and are they all the same God or a mix of gods or aspects of one God.

My answer: Besides the name Dagda, which is always given with the prefix ‘the’, I’m aware of 9 epithets and common other names for him: Eochaid Ollathair, Ruad Rofessa, Aedh Alainn, Aodh Ruad Rofessa, Dagda Mór, Dagda Dein, Dagda Duir, Dagda Deirg, and Dagda Donn. In the Cath Maige Tuired he also gives a long list of 26 obscure names which he says are his.

They seem to be all names of one God, although there’s no way to be absolutely certain that at some very early point they weren’t distinct deities later fused into one. Certainly the sources tend to often emphasize ‘Eochaid who was the Dagda’ or ‘The Dagda had three names, that is Eochaid Ollathair, Ruad Rofessa, and Aedh Alainn’.

So that’s my take on a variety of questions people had on the Dagda. If you have questions of your own ask them in the comments and I’ll try to answer them here. The Dagda is a complex and complicated deity and one who has a lot of mythology and associations, so its hard to reduce all of that down into a blog, but hopefully this addresses at least the common questions. 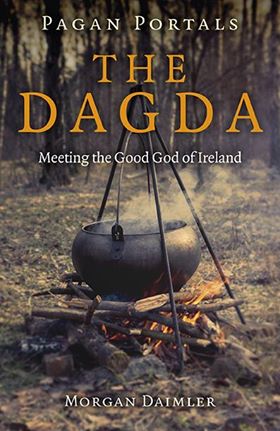 February 13, 2018
The Other Side of the Hedge: The Future of Paganism
Next Post

February 23, 2018 Hearth of Hellenism: Anthesteria, Celebrating Dionysus
Recent Comments
0 | Leave a Comment
"Great insights, Martha. You know that with my agnostic leanings I have a different concept ..."
Willow Rose The Corner Crone: Hekate of the ..."
"A sincere thank you for sharing this. I so appreciate the opportunity to understand others's ..."
Willow Rose Between Two Worlds: Anna, Another Lesson ..."
"I always enjoy your thoughtful insights."
Willow Rose Between Two Worlds: Reminiscing and Moving ..."
"A necessary message, beautifully composed. Thank you for sharing of yourself, Martha."
Laurie The Corner Crone: Self-Love Will Be ..."
Browse Our Archives
Related posts from Agora