My Altar in Quarantine

My altar is an ever-changing entity in my household. I rearrange it frequently to keep it consistent with the growth of my practice, so objects and idols have come and gone over the years. Some pieces are passed on to friends, but usually things I do not currently find meaningful are packed away in a box. I recently moved, so I had the chance to start from scratch. One of the items I found in my storage box was a small marble statue of Apollo with a gilded harp. 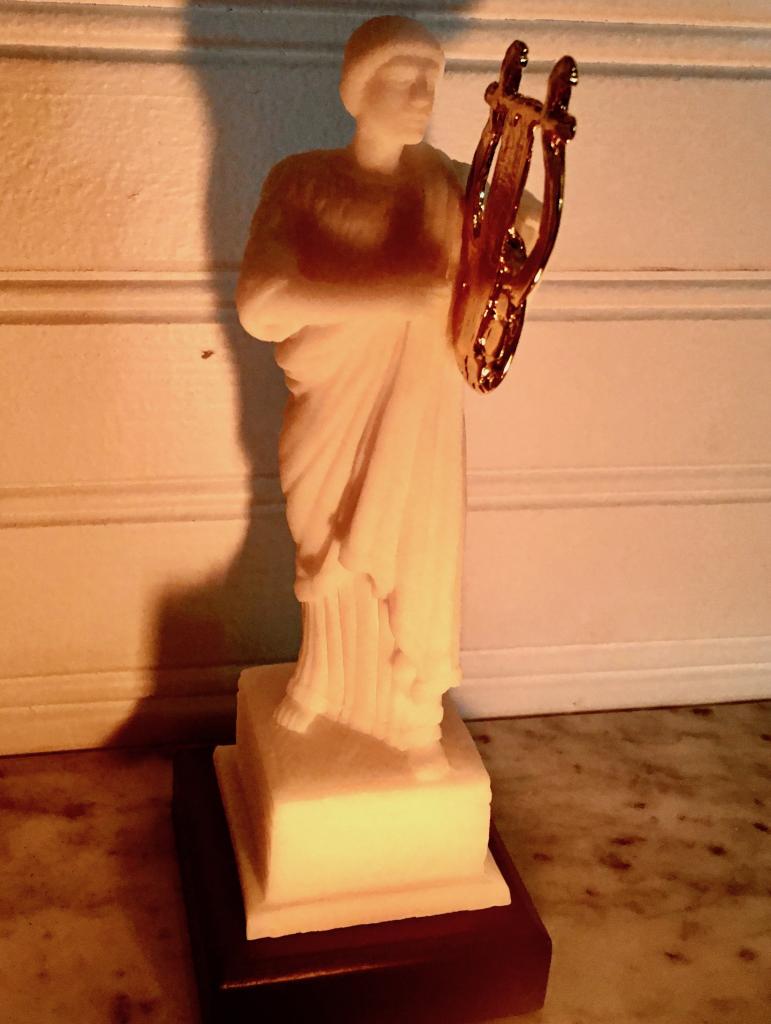 This piece is a very nice reproduction of a genuine Ancient Greek artifact and I purchased it because of Apollo’s association with the sun and the arts. However, a conversation I recently had with a friend about COVID-19 reminded me of one of the lesser known aspects of Apollo. He is the god of plague. Apollo has several epithets in ancient mythology associated with this trait such as Apollo Acestor (healer) or Apollo Medicus (physician). He is the god who delivers people from disease and plague, but he is also Apollo Parnopius (locust) who casts epidemics on people who displease him.

In myth, this is portrayed as Apollo Parnopius loosing an arrow into a city to start an epidemic. With this in mind it seemed that this statue, which I had not felt particularly connected to for a while, needed to be placed on my altar. In the ancient Mediterranean people made offerings to Apollo to ask for healing and whole societies made sacrifices and beseeched Apollo for aid in times of plague, so it seemed appropriate to continue that tradition in my own small way.

Until the quarantine orders happened and the World Health Organization classified this coronavirus a pandemic, I thought of plagues as a thing firmly placed in history. Surely we have the medical technology to handle a virus? We keep ourselves and our living spaces cleaner than the ancient people did, right?

This pandemic has been a wakeup call to our fragility. Some of the symptoms that put one at risk of death from this virus, like asthma and heart problems, are frighteningly common. When I look at all the people being laid off and all the businesses struggling, it seems the economic system that holds our society together might be even more fragile than us humans.

When I lit the scented candle on my newly arranged altar and watched the light dance over the statues of Apollo and Gaia, it struck me that they are probably indifferent to the struggle humanity and our economic system are currently going through. These primordial deities of earth and sun have seen many plagues and have seen countless societies collapse. It is not much of a stretch to think that some humans dying or, more importantly, the current economic system being slowed down would be good for the earth. If Apollo casts plague on societies which have displeased him, I can think of many ways in which he, a pagan deity of nature, would be furious at our world economic system.

I remain agnostic about the reality of the gods and I do not believe that COVID-19 was loosed upon the earth by an angry Apollo, but it is an interesting thought experiment. One of the things I like most about ancient Greek paganism is the concept of hubris, which says that humanity should be careful not to become too arrogant in its goals and abilities. Greek myth is rife with examples of humans who aimed too high and were cast down by the fury of the gods.

It is clear that this pandemic will leave a lasting psychological impact on our society and it will likely bring about numerous policy changes. My hope is that we go forward with a little more trepidation and an appreciation of the havoc one small act of nature can bring. If we can learn this lesson and curb our hubris, then perhaps we can begin to tackle the climate crisis in a mindful way and build a stronger society. One that is not as fragile in times of crisis. In the meantime, in my practice, I am going to keep burning candles and incense to Apollo the healer.

April 3, 2020
The Balancing Path: Moon Water with No Moonlight
Next Post