Spiritual Maturity for Pagans—and Everyone Else

Many years ago I ran across a “scale of spiritual maturity” that was both theoretically interesting and useful in practice. I’ve never able to relocate it. I thought it was called “The Myers-Briggs Scale . . .” but searching on that turns up nothing but their Jungian personality typology, which seems to be neither more nor less scientifically valid than the Enneagram or one’s natal chart. Each of these, like many other systems, relies on intuition in order to be of any use.

However, I clearly remember the structure of the scale. It built upon the psychological model of spiritual maturity that William Blake had devised by about 1790. It also seemed to be “culture-free”; at least, it was intended to be a useful description of people from any and all religious and cultural backgrounds. Whether that intent was achieved will need to be carefully scrutinized. Still, that is already better than any of the “scales of spiritual maturity” I could find by Googling, all of which depend on assumptions peculiar to Christianity and are therefore rather opaque to non-Christians. I think spiritual maturity for Pagans and for any other sort of religious community must be based on the same factors of human psychology.

The scale I had found was divided into six stages. The first three, of childhood, adolescence, and adulthood, correspond closely to the stages that Blake called Innocence, Experience, and Organized Innocence, and that constitute the philosophical framework for his Songs of Innocence and Experience, along with quite a few of his later poems. The three later stages of the six-stage scale have no established names, because they are rare, rarer, and rarest, respectively.

Blake’s stage of Innocence is that of the child who believes implicitly and appropriately in the absolute truth of everything he or she is taught. Every faith community has two different versions of their religion: one for children, and one for adults. “Sunday School,” whatever a community calls it, is what one teaches to children. Every faith community also has some version of the rule stated in Catholic tradition as “Do not disturb the faith of the little ones.” It’s a good rule, though often misapplied. It would be cruel to shake the faith of children before they are ready for the next stage. As Blake said, “He who shall teach the Child to doubt /Will ne’er the rotting grave get out.” Hence nothing that could contradict that childhood stage of faith is ever preached on Sunday mornings.

The tragedy of our and other societies is that many people who appear to be adults never learn anything more than that Sunday-school version of their particular religion and never seemeven  to know that the adult version exists. Think: if their faith were actually as simple as the version taught to children, if it had no way to answer the real questions of real adults about real-life problems, how could it have survived for thousands of years? But instead of moving on to that adult version, many people become fundamentalists, by refusing to revise their maps, by devising more and more Byzantine excuses for not revising their maps, in brief, by becoming unteachable. That is the first stage of spiritual immaturity,

The stage of Experience is that of the adolescent who questions and for the most part rejects everything. In my case, there was no gradual transition. My “enlightenment” experience at 14 slammed the door to childhood shut and opened the door to adolescence in an instant that felt like forever. I was no longer obligated to believe in the truth of Catholic doctrine, but I was obligated to search out the truth about all things religious, including those doctrines, for myself. I’m still working on that; I know firsthand what Scott Peck meant about the difficulties of being “dedicated to truth.”

Adolescence is the crucial stage for developing spiritual maturity. An older child will begin to notice that some of the stories simply don’t make sense in terms of facts and will begin to ask questions. When a child is old enough to ask difficult questions, he or she must be given the difficult answers; else he or she will decide, reasonably enough, that there are no answers and will walk away. This often happens after what I’ve heard called the “drop-out rituals”: bar mitzvah, confirmation, and so on. As Fr. Benedict Groeschl emphasized, the adolescent must rebel, at least intellectually, against all that childish stuff in order to develop an autonomous personality. The ones who never rebel never become adults.

In other words, it is not only healthy but also essential for a teenager to question and reject anything that does not stand up to critical inspection, in order to begin assembling beliefs, a philosophy, an intellectual structure adequate for his or own idiosyncratic needs. It is normal for high-school and college students to be aggressively skeptical. It is pathetic for a “grown-up” to be stuck in that literally sophomoric stage. As anyone who teaches college knows, a closed-minded atheistic materialism is the party line among academics—except for some of those in Religious Studies. That is the second stage of spiritual immaturity. In contrast, as Scott Peck said, the road to holiness lies through questioning everything.

Blake did not write a set of poems to portray Organized Innocence; instead, he wanted the Songs of Innocence to be reread in a higher state of mind, one open to seeing a different sort of truth in them. That is, after the analytic stage of adolescence, an adult needs to begin synthesizing a very different concept of what religion is all about. In my case, that transition occurred at age 22, in 1963. Having completed a major in Cultural Anthropology, I knew that all human beings have some set of values that is or is equivalent to a religion. Without any values at all (a condition known as anomie, which is a late and usually lethal stage of clinical depression), one cannot make decisions. If “All religion is bunk,” then the entire human race must be continually in a state of utter delusion. That is not plausible. Instead, I thought, religion must be doing something that contributes to the survival of our species, and I began to think about what that might be. I can observe that, for many people, having children is a reason to become active  in one’s childhood church again.

There is another way to describe the progress through these first three stages, in that all religions have both a foundation myth and an actual history. The child believes, of course, that the myth is the history. The adolescent, discovering the history, thinks that the myth is merely a fiction. A genuine adult will understand that the myth and the history are both true and cannot conflict, since the myth teaches values, whereas the history is based on facts. Values are not derived from and cannot be refuted by facts. On the other hand, history is meaningful only insofar as it has been mythified. There is always tension between the myth and the history; an adult can live with that.

A unique characteristic of the Tanach is that it presents both the myth and the history. The myth is, of course, the life of Moses recounted in the Torah. The central episode of the history is presented in II Kings 22, which describes how the High Priest Hilkiah, his son Jeremiah, the prophetess Hulda, and various others constructed the Deuteronomic Reform and persuaded the very young king Josiah to accept it. There was no intent to deceive. In fact, every important story in the Bible is told at least twice, if not four times (as in the gospels), each with different, incompatible details, as if the writers hoped the readers would ignore the details and instead understand the point of the story. Unfortunately, the spiritually immature have always insisted on interpreting every story as being historical, on inventing increasingly elaborate systems of apologetics to defend such an interpretation, and on accusing teenagers who discover the actual history of being heretics, tools of the Devil, etc. I will refrain from giving a detailed example, but will merely point out that the story of Adam and Eve is a parable, like that of the Prodigal Son. I think it possible that its author(s) never imagined that some people would misunderstand it as being history.

It is appropriate and essential for an adolescent to be self-centered. After all, the adolescent’s true occupation is constructing a self for the future. In Stage 3, when an adolescent becomes an adult, he or she will become focused on family again, now not being taken care of, as a child, but instead as the one giving care. As C.S. Lewis said, to love is to care more for the welfare of the other person than for one’s own. Selfishness is thus the third stage of spiritual immaturity.

In the last three stages of the scale, a person’s ability to love expands outward, to increasingly larger circles and finally to all of humanity. Obviously, very few people reach this last stage.

Please note that none of the preceding depends at all on what, if anything, one believes about the nature of the divine. That is why it applies just as well to Buddhists as to anyone else. There is more to be said, of course, but this is enough for now. I will close with one of my favorite quips by another great British writer, W.H. Auden; “I know we are here to serve others. What the others are here for I have no idea.”

December 15, 2012 Of Blogging and Poetry
Recent Comments
0 | Leave a Comment
Browse Our Archives
Related posts from Aidan Kelly: Including Paganism

Pagan
The Word Creates the Thing It Names
Aidan Kelly: Including Paganism 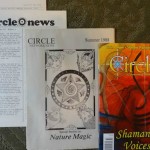 Pagan
A Tapestry of Witches II: Circle and the...
Aidan Kelly: Including Paganism
TRENDING AT PATHEOS Pagan