A Tapestry of Witches: A History of the Craft in America, Volume I is now available on Amazon 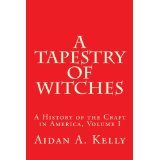 I have released the first volume of the history for which I began gathering data about 30 years ago. It covers from 1893 up to the mid-1970s. There were Witches before Gardnerian Witchcraft was introduced to America by Raymond Buckland, and there still are. The relationship between these two varieties is still a matter for active discussion. The book contains several hundred footnotes, mostly documenting the Wiccan and Pagan periodicals from which I gleaned the data about the existence of covens, nests, groves, etc. Hence I am not releasing it as an e-book, because the footnotes would be mangled in that format.

I was an active participant in many of the events and developments I describe, but I have tried to tone down the autobiographical details by unobstrusive (I hope) use of passive constructions and third person. Still, one reason the book is accurate is that I have first-hand knowledge of the decade from 1967 to 1977. However, I also as much as possible worked in information from letter, emails, and interviews that my friends shared with me. I have not ignored the Big Name Pagans–I couldn’t; many of them did much of the work, many were and are good friends–but I have also tried to give due credit to the many who worked hard without ever receiving public acclaim.

There have, of course, been many books describing the overall history and nature of the Craft movement. I am especially and immensely grateful to and appreciative of Margot Adler and Chas Clifton. I have tried to improve on their work by gathering even more data and telling the stories in my own way.

It was not easy figuring out how to write this book. It sometimes seemed like trying to describe a jungle using only a random sample of cuttings. But I finally realized that it needed a three-dimensional structure. The chronological structure (the warp) describes the evolution of the family tree of covens, Traditions, and lineages, as they bifurcated, mutated, and merged. The weft, as it were, describes the lateral movement, in the formation of regional associations of various sorts, Finally, there is the overlay of the web of friendships between those who have known each other for decades. All that is why I have called it a tapestry.

Perhaps some readers will be anxious to find out more about their own groups or Traditions. Please have patience. I will generate Volume II (working on it now), bringing the history up to the mid-1980s, and Volume III, bringing it to the mid-1990s, as soon as I can. The history for the last 20 years presents some methodological problems, but I am at least thinking about whether I can cope with them.

You should be able to find ATOW on Amazon, along with another dozen books I have written or co-authored, just by searching on my name. I will be grateful if sales are significant. Even at 73, I have three kids at home to feed.

May 2, 2014 About Writing Witchy History
Recent Comments
0 | Leave a Comment
Browse Our Archives
Related posts from Aidan Kelly: Including Paganism