Lego (about which I occasionally blog lovingly) has been accused of racism for alleged similarities between its Jabba the Hut lair set and famous Turkish mosques. 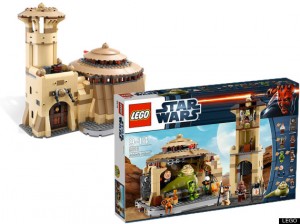 A Turkish community in Austria has accused Lego of racism amid claims a model from its Star Wars range resembles a renowned mosque.

I’m pretty vigilant and unapologetic about calling companies out for pushing the envelope on such things, but I have to say that I don’t agree in this case.

It’s not as if this style of domed building were even specific to the Ottomans, either. Byzantine Christians were doing it before them (hence the exotic curves of the Kremlin). To wit, the iconic Hagia Sophia was once a cathedral, not unlike how the Alhambra of Grenada began as a mosque.

And you eventually run out of new “alien” architectural styles in Sci-Fi.

January 24, 2013
Amitabh Pal on nonviolence in Islam
Next Post

July 25, 2013 The pros and cons of White House iftars in the Obama era
Recent Comments
0 | Leave a Comment
Browse Our Archives
Related posts from Akram's Razor