Oppression Lifted for Some yet Hated by Others

Yesterday, I wrote a piece called “The Hatred of Unconditional Love.”  In my own quotes, “Not comprehending that some middle-aged and older people were as truly as angry as I thought they were about loan forgiveness, I made this post in quotes on my Facebook page with an Avatar megaphone.”

“After earning two degrees plus 2 years of post-graduate credentialing, I am thrilled that others will have loan relief.”

This is not the first time people responded with great hatred and malice on Facebook over the lifting of oppression for others.  I had no clue that I would be hated for rejoicing over relief for Millennials and Gen Z’s.  I fact-checked this meme which is correct. 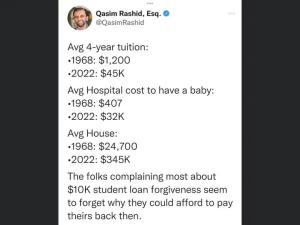 Millennials and Gen Zs pay astronomically more for college loan debt than previous generations, deal with much higher expenses than previous generations, and are sadly waiting to have children much later or not having children at all because the cost of living is so high.  I celebrate any sort of relief for them, yet many Baby Boomers and Conservative Generation Xers vilify me for speaking on their behalf.

In June 2020, the US Military removed symbols of the Confederacy. Since some of my friends are a mixture of Blacks and Hispanics living in the multi-cultural area of San Antonio, and some of them serve in the military, I found great joy in the military removing symbols of the Confederacy for their honor. I felt it was a symbol of easing the oppression of racism, at least to a small degree. Yet, I was ripped and shredded for finding joy in the lifting of oppression for my Black brothers and sisters. 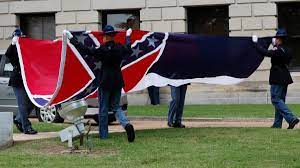 I can also give other examples of where I innocently found joy for others when somehow this joy was greatly offensive to others.  History tells us why we have the greatest division today since the Civil War. I wouldn’t know this history as thoroughly as I do now if I had not studied and experienced these accounts over the last five years.

This speech from Rep. Mallory McMorrow may go down in history as one of the greatest speeches spoken in American history. It perfectly describes the hatred of right-winged ideology which is all about fear, hatred, and further marginalizing the marginalized, the exact opposite of what Christianity truly teaches. Two Thousand Bible verses, Catholic Social Teaching, and loving our neighbor as ourselves are at the core of our faith and democracy yet a repellant to right-winged predatory “White Christian Nationalism.”

One quote that particularly caught my attention from the video was “I want every child in this state feel safe, seen, and heard and not further marginalized because they are not straight, white, and Christian. I say this as a White Christian suburban mother.” Racism, bigotry, selfishness, power, greed, and “White Conservative Christian Supremacy” partly are at the core of the division we have now.  These evils are deeply rooted in the fabric of American history and culture.  “White Conservative Christian Supremacy” hates the increasing evolution of the multi-colored. multi-cultural landscape they see on the horizon, including the LBGTQ spectrum.

How do we combat this? We combat it with the radical unconditional love of Jesus Christ, the Real Jesus, not the GOP Jesus.

August 30, 2022 Lives and Human Dignity---LBGTQIA+ people and their families (part 1 of 6)
Browse Our Archives
Related posts from All Texans, Not Some Texans

Catholic
Fundamentalism vs. Life, Human Dignity, and Jesus' Teachings
All Texans, Not Some Texans
TRENDING AT PATHEOS Catholic