The Hatred of Unconditional Love

Last night and early today at 5:00 am, I wasn’t able to diminish my internal sorrow of what I witnessed when Joe Biden passed a historic student loan forgiveness act.  As a mother who still has still one college child of multiples who all went to college, it profoundly puzzles me that people my age (50), and especially older, are fuming with anger that Millennials and Gen Z young people would have some much-needed and well-deserved financial relief from college loans.  After doing some fact-checking and a little research, the current generation of young people pays a much higher percentage of their median income for college and by-ratio has much higher expenses than previous generations. Not comprehending that some middle-aged and older people were as truly as angry as I thought they were about loan forgiveness, I made this post in quotes on my Facebook page with an Avatar megaphone and mentally responded with John Pavlovitz’s meme as various people replied.

“After earning two degrees plus 2 years of post-graduate credentialing, I am thrilled that others will have loan relief.” 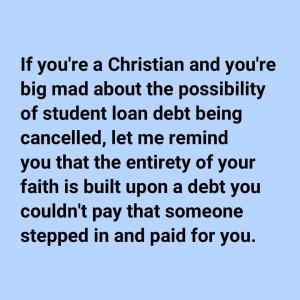 I might as well have declared war. Since most of my friends post-Trump are more progressive, they commented in agreement and love, but I also have friends and family who are not like-minded politically, and that’s alright. What puzzled me the most was the level of backlash for cheering on relief of any kind for my kids’ generation, Millennials and Gen Z’s.   I for one, happen to adore my kids’ generation because I think they are the most selfless, accepting, inclusive, kindest, and hard-working generation I’ve ever known.  And quite frankly, I don’t blame them for being less religious due to the behavior of their elders, for I’ve been guilty at times. This level of anger for relief of beautiful young people just isn’t normal.  Sadly, I learned that this is a culturally-rooted issue which goes much deeper historically than student loan forgiveness.

To make sense of the current greatest division of all times since the Civil War, over the last five years, I used my graduate research skills to study the history of why the current division is so bad today.  At least a small part of this division is rooted in Ronald Reagan vetoing the Fairness Doctrine in the 1980s and Fox News broadcasting in the 1990s. Biased media has created a particular amount of misinformation and polarization. Even deeper is the level of damage this has done to millions of minds and hearts over four decades of people in my parents’ generation and a good number of people in my own generation, not everyone, but many. The level of toxic visceral and hatred directed at those who fully exhibit the Fruits of the Spirit and the marginalized just isn’t normal, but sadly, history many times explains our current times.  The end result today is a bold hatred of those who exhibit sacrificial and unconditional love, like the traits in this picture starting with “Love Your Neighbor” next to this beautiful Episcopal Church. 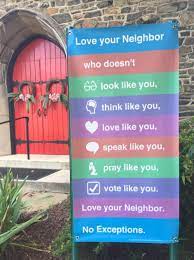 The hard political right has taken the 12-15 Bible verses which speak about women being quiet and sexuality, and they have waged war on the poor and marginalized by eliminating the 2000 Bible verses, Catholic Social Teaching, and the second greatest commandment, “Love Your Neighbor as Yourself” which all tell us to uplift take care of the marginalized.

I adore the current generation of young people.  They simply don’t care that others are different because they love people unconditionally.  In fact, they embrace diversity and want their own children to embrace unconditional love and diversity.  Financially and sadly so, it is much more difficult for this generation to have children due to financial hardships, so they are having less children and waiting longer to start their families. As I stated above, I think Millennials and Gen Z’s are the most selfless, accepting, inclusive, kindest, and hardest-working people I’ve ever known, and I believe they act more like Jesus than anyone else whether they believe in Him or not.  I agree with Bernie Sanders when he praises Millennials and Gen Z’s for being “beautiful young people.” 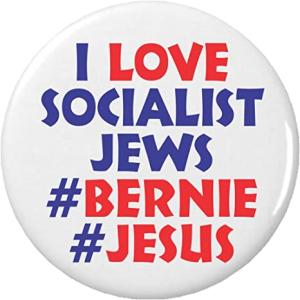 August 24, 2022
Political Survival of "The Least of These"
Next Post

August 27, 2022 Oppression Lifted for Some yet Hated by Others
Browse Our Archives
Related posts from All Texans, Not Some Texans

Catholic
A Plea for Peace to Do My Work;...
All Texans, Not Some Texans

Catholic
Fascism is Here; It Didn't Happen Overnight
All Texans, Not Some Texans

Catholic
The Pre-Constantine Catholic and the Current Deconstruction Age
All Texans, Not Some Texans
TRENDING AT PATHEOS Catholic