Why I Left Traddery and Burned my Chapel Veil, The Sequel

A few months ago, I wrote a piece called, “Doctrinal Certainty Over Born Life–Why I Left Traddery (Part 6 of 6).”

I discussed my traditional Episcopalian upbringing and how I moved to more conservative religious circles, finally ending up in traddery, The Anglican Church of Nigeria and then converting to Catholicism through the Catholic Ordinariate.  Never did I think I would leave traditionalist circles, not until Trump came along.  I am going to restate much of what I wrote previously and then add why burned my chapel veils at the end. 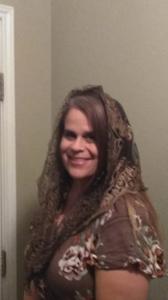 When COVID started in 2020, I noticed a sharp internal disagreement in our previous trad Catholic parish as to whether or not the Church should follow COVID guidelines. I didn’t take long before this Catholic Church totally stopped asking people to wear masks.  Social distancing was minimally attempted. I went to my Parkinson’s neurologist who advised me not to attend Church unless the parish made a great attempt to follow COVID guidelines.  A Catholic clergyman in the Ordinariate trad parish advised me that voting for Joe Biden and getting the vaccine were grave sins since both were connected to abortion, even remotely.  This was going on in traditional Catholic parishes all over the country. I didn’t vote for Joe Biden, but I had to get the COVID vaccine to protect myself and my patients.  This is when we found the beautiful historic urban San Fernando Cathedral where we still attend Mass. This Cathedral followed COVID guidelines throughout the pandemic.

Opening my eyes to the greater Catholic world, I noticed that most people in my urban Cathedral are Hispanic which means most of them are Democrat, including the clergy.  So according to the clergyman in the previous trad parish, most of the people and most of the clergy at the San Fernando Cathedral are going to hell because they are Democrats and got the vaccine. I then checked into the official stance from the Vatican which said Catholics can vote for life issues on the Democratic side according to our conscience as long as we don’t personally support abortion.  Then, the Vatican was dispensing the vaccine.  I guess according to that clergyman, the Vatican is going to hell too.  This clergyman and much of the trad parish were more concerned with the rules than whether or not people lived or died, but the unborn to some were the only lives who mattered.

The same can be said about the sexuality doctrine when LBGQIA+ people and their families are dying daily at the hands of untrained and hateful laity and clergy which now I understand at a professional and familial level.   All of the current science and every major medical association in the world states that affirmation and reconciliation are life and death.  Overall, the church must move to reconcile with the LGBTQ Catholics and their families and provide safe and pastoral ministry which aligns with current science.  Shoving all of these families out of the Church will only increase suicides and lasting damage to the families which sadly, many trads celebrate.  This doesn’t mean Church teaching should change or be dismissed, but it cannot be applied to harm and kill people which has been happening for many years. “The Hogg Foundation for Mental Health states that every word and action of love, affirmation or acceptance (which has nothing to do with sexual activity), can be the difference life and death for LGBTQ+ people.”  Anything else will continue to endanger and disrupt the lives of LGBTQ+ people and their families.

Since I wrote all of the above, I have been attacked by trads through many angles for sharing my professional and personal experiences, leaving traddery, denouncing Trumpism, and denouncing hard-core fundamentalism.  In short, traddery became dangerous during the Trump era.  In retrospect, I think it was dangerous before, but showed its true colors when Trump showed his.  When Jesus’s first and second greatest commandments and Catholic Social Teaching are totally removed, worshipping Trump and the Republican party is commanded of everyone, and the celebration of harm and death towards minority and marginalized populations are part of the Church, it is no longer Christianity/Catholicism.  It’s fascism.

So since then, I have burned my chapel veils as a way to cope with fascism in the Church. It took me many years of study to convert to Catholicism because historically, Jesus founded the Catholic Church on Rock on Peter. But when fascism reared its ugly head through traditionalist settings trying to rule over the rest of the Catholic Church and push Pope Francis into early retirement or an early grave, I would have lost my faith if it hadn’t been for the Jesuits who actually saved one of my children’s lives. I undoubtedly believe that my child would be dead if I hadn’t left traddery to the urban Historic San Fernando Cathedral with my family who all loves it.

October 26, 2022
The Traditional Hispanic Catholic Family and the LGBTQ Child
Next Post

November 1, 2022 A Wake-Up-Call to the Reality of Right-Wing Ideology
Browse Our Archives
Related posts from All Texans, Not Some Texans

Doctrine as a "Guardrail," NOT a "Weapon."
As any religious person knows, especially in the American Catholic and broader...
view all Catholic blogs