The 1st Ramadan Interfaith Iftaar (In the Bay Area)

Continuing our series on the history of Muslim Media Activism in the Bay Area from last month, I was recruited by my local mosque, the South Bay Islamic Association (SBIA) in San Jose, CA shortly after the tragedies of Sept. 11th, 2001. According to Mohammad Azizuddin, the former Vice-President of the Mosque Board at the time, “[The] Majority of the SBIA membership is from San Jose, which is the largest city in the bay area in terms of Muslim population, but had no formal media representation to respond to the backlash of the 9/11 aftermath.” So he and the late President of SBIA, Ahmad Al-Helew, decided to form a “Media Action Committee,” which later became known simply as “the Media Committee” in November of 2001.

The original 3 members of the Media Committee were Azizuddin (or Aziz for short), Arif Khan (currently serves as the VP of the Mosque Board) and myself.  Our charter for the committee was to: “train and empower our community to deal positively with the various media forms (television, radio, print, internet) and to become active participants in the media process. We are cognizant of the need to shape public opinion, especially in these difficult times. Instead of being passive onlookers, we need to do our part in clearing misconceptions and promoting the truth about Islam and our community.”

Personally one of my goals was to recruit as many people as possible, preferably with some kind of media experience, to join our committee, because I knew we were going to need a lot of help. Some of the early members which were recruited by myself and other members of the committee included Imam Bilal Ibn Muhammad (a local community TV producer who was also a religious leader in the South Bay), Mertze Dahlin (former President of SBIA who converted to Islam in the 1950’s), Reshma Yunus (who was already very active in mainstream Non-Profits such as the League of Women Voters, etc.) as well as Adeel Iqbal and Farah Khan – two youth who both grew up in the SBIA community, as I did.  The main distinction between the Media Committee from other committees in the mosque, was that the majority (not all) of the members were born and raised in America and the committee members were also a mix of young and old, men and women as well as indigenous and immigrant Muslims.  These differences obviously caused some friction here and there, but it also created an environment conducive to generating great ideas, for new events and programs, some of which have never been done in a mosque or come out of one before.

One such event was the Bay Area’s first “Ramadan Interfaith Iftaar.” Although, this was not the first major event the Media Committee produced, it was one of the most effective ones, and since we are currently in the holy month of Ramadan now, I wanted to share some thoughts about the first one which was held in November of 2003 at SBIA.  Back in the early 2000’s the Muslim community was still somewhat insular.  The media onslaught which occurred after Sept 11th, 2001 forced the Bay Area Muslim community to open up more.  According to former Media Committee member (and former Chair), Adeel Iqbal, “Iftar [breaking of the fast] with [the broader] community members was an opportunity to live the idea that we as a [Muslim] community need to be proactive rather than reactive. Though much our community’s efforts can often focus on “awareness” about Islam and Muslims, this event allowed members of our broader community to experience Islam – and in a very beautiful way.”

According to our committee’s knowledge there had never been an event like this before, at least in the Bay Area, where a Mosque had not only invited it’s neighbors of other faiths, but we went out of our way to invite members of the broader Business, Political, Religious and Science communities which we referred to as “the four mountains,” to join us in breaking the fast in Ramadan.  With the help of Imam Tahir Anwar, who was already very active in several community groups in San Jose, we created a large list of invitees and sent out formal invitations in the mail.

One of the other unique aspects of our Ramadan Iftaar event, was that we purposely decided to have a healthy and organic menu with several vegetarian options, to make sure we could accommodate the diverse palate of our guests as well as embody the spirit of Ramadan, which unfortunately is in stark contrast to most iftaars held at many mosques today.

Of course, since we were called “The Media Committee” we always tried to invite the local media to any event which we were involved with.  And the Interfaith Iftaar was no different. We created a press release and sent it out to any Bay Area Media contact we could find.  Luckily, the San Jose Mercury News decided to do a story before the actual event, and gave us front page coverage in the “Family & Religion” section of the Saturday paper!

With the help of the Newspaper article as well as our formal invites, we received many RSVP’s and the event was a great success.  We even had a special appearance by former Sports reporter, Martin Wyatt, himself a practicing Muslim, thanks to a personal invite from my friend Javaid Malik who worked with him at ABC 7 News in San Francisco at the time.  Because of the very positive reaction from the broader community as well as the excellent media coverage we received, Helal Omeira, the former director for the SF Bay Area chapter of CAIR (Council of American & Islamic Relations), used our event planning and execution as a template for Ramadan Open Houses at other mosques in the Bay Area, which eventually joined in having their own Interfaith Iftaars in the following years.

Although now 16 years later after it was formed, the Media Committee is no longer a formal committee at SBIA, the legacy of our pioneering work still continues to this day.  The 14th Annual Ramadan Interfaith Iftaar will be happening on Sunday June 11th, 2017 at SBIA’s new (since 2013) headquarters at 2345 Harris Way in San Jose.  As Imam Tahir was quoted in the press release about the First Interfaith Iftaar back in 2003, “We feel it is important to get to know one another on a personal level. That is how we break the barriers of stereotypes and that is what will bring us one step closer to peace in this world.” These words still ring very true today, so I hope you can join us with your family to break bread and learn about your Muslim neighbor this Sunday June 11th.  Please RSVP at rsvp@sbia.info 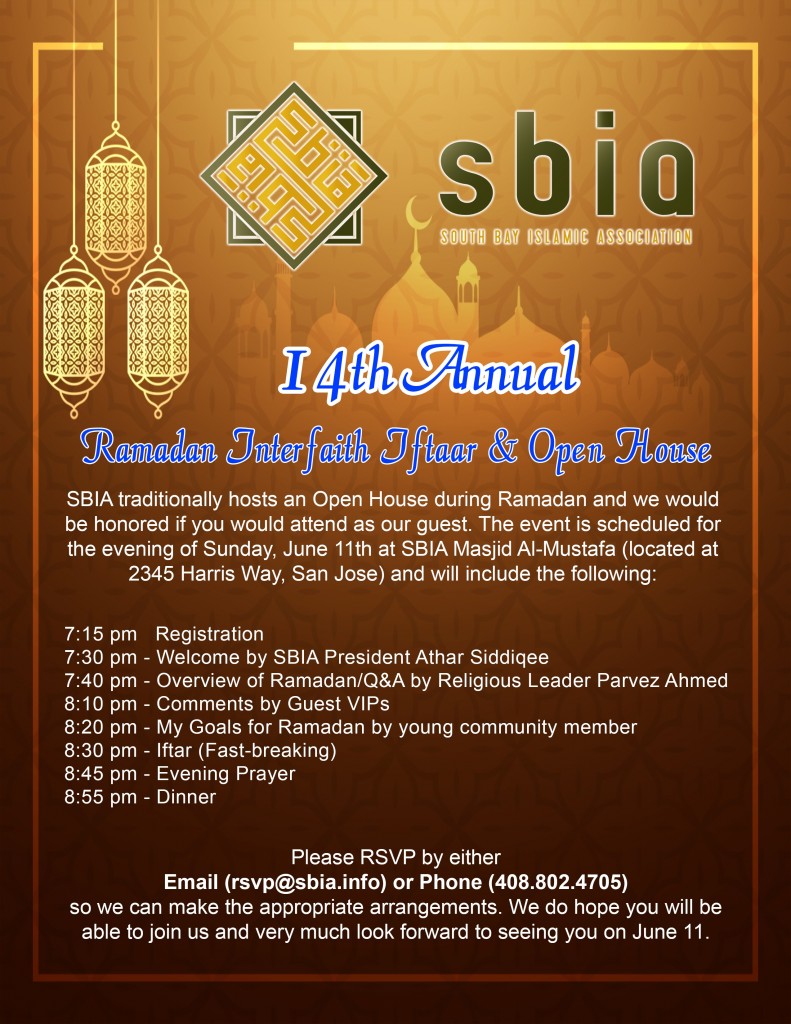 NEXT CHAPTER COMING SOON: The Media Committee and the Eid Festival Fiasco of 2002….

May 26, 2017
The Religion of ‘Star Wars’: Why People of All Faiths Embrace the Force
Next Post