Short Notes on the Jinn, Demons, and the Mu’allaqat

I’ve been reading about the jinn these days, and while it’s true that I haven’t paid much attention to this blog for a long time, the longest since I started it, I haven’t entirely forgotten about it. I recently started one of the books I have at hand, and have been discovering some interesting things about the Fire Spirits that I haven’t thought about before.

While it’s true that they are usually equated to demons and devils, Legends of the Fire Spirits: Jinn and Genies from Arabia to Zanzibar, by Robert Lebling, explains that those are just a type of jinn, and that even the root of the word Demon, daemon, from the Greek, referred to a creature that could be either good or evil.

Also, the author mentions that the jinn were more feared by the city-dewlling people than nomads, the Beduins. There was always a certain amount of respect, maybe a bit of fear, but it was a lot more prominent in towns and cities, where the jinn were said to be cruel, inhabit desolate places, violent toward humans, and the type of beings that one should keep a distance from.

I previously wrote about this topic based on my first impressions from the Arabian Nights, but it’s the first time I actually read those ideas being confirmed. The same book also hints at the possibility that, just the same as man evolving from being created from clay to become flesh and bone, the jinn could have evolved from their initial form, made of smokeless fire.

It has also made me think that perhaps there could also be agender, asexual, maybe even transgender jinn. The books explains that they are very similar to humans in the way of being good or evil, romance, lust, feelings, and desire. While it’s easy to look at them as foreign, frightening creatures, Lebling says that some jinn even fell in love with humans and started families. It seems possible to me, then, that some of them do not feel any kind of romantic or sexual interest in humans.

The more I read about them, the more it surprises me how similar, yet different, they are from humankind. They’re neither blue-skinned and happy, or hungry for souls and desperate to condemn. In a way, they reminded me to how the Fae are seen in traditional folklore, with their own sets of rules, with a complicated, often contradictory image, and different types of interaction with the human world.

While it’s true that legends often paint them in a negative light, I can’t help but wonder that maybe they’re not as terrible as some might want to make us believe. I wouldn’t mess with one, that’s for sure, I respect all spirits, but I do find that theirs is a fascinating world to explore and learn about.

As a side note, I’ve been reading the Mu’allaqat, the Seven Hanged Poems on the Kaaba, it’s been one hell of a challenge. However, right after writing that previous line, I found that the poems were edited in a free book, Al-Mu’allaqat for Millennials: Pre-Islamic Arabic Golden Odes, with the text both in Arabic and English. Guess how’s going to be reading?

October 27, 2022 How Do NeoPagans Feel About Homosexuality?
Browse Our Archives
Related posts from A Modern Day Sha'ir 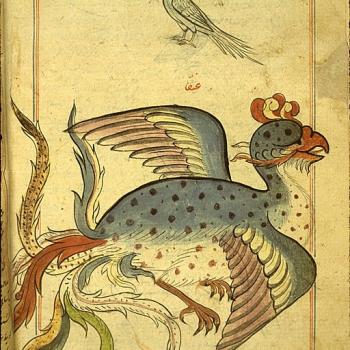