The Secret Masonic History of –Nothing Really

The Secret Masonic History of –Nothing Really October 17, 2013 Arlene Sánchez-Walsh

Outbursts of religious zealotry are par for the course in my line of work. Having studied and worshiped with Pentecostals for nearly 20 years, most of these outbursts are not of an overtly political nature—unless you count the “prophetic” word someone once yelled out to watch more Christian T.V.—which I immediately categorized in my own mind as not only aesthetically questionable, but certainly emanating from a political agenda.

So a couple of religious outbursts have caught my attention of late—one, a brief shining moment of an old Right-Wing trope about the “Great Masonic” conspiracy uttered last night in the well of the House of Representatives by a House stenographer, the clip is provided below.

I did not get much else out of her outburst, but that really was enough, since it is these couple of remarkably resilient tropes that fascinate me about the comfortable collection of tropes that Right Wing Christians refer to 1) make (false) claims that the Founders of the United States were somehow contemporary Right Wing Christians, and 2) the Masonic conspiracy-coupled with the Illuminati, Trilateral Commission, Bilderbergers, Rothschild’s, MK-Ultra, and formerly Jesuit and if you go back far enough—Jewish—conspiracies really are the secret power guiding all the demonic activity that these Christian groups are often convinced lies at the heart of why they can’t get what they want when then want out of the government.

As conspiracies are wont to do–they change.  Since being overtly anti-Catholic among mostly evangelical Right Wing circles is now de riguer, not to mention not good for the political efforts of the Religious Right, who, since at least the 1970s, has determined that it is better to have Right Wing Catholics as your friends than as your enemies–Jesuits are no longer the conspiratorial secret hand.  Neither are Jews, since the conspiratorial and anti-Semitic rants of Old Guard Right Wing extremists like Father Coughlin and Gerald L.K. Smith (speech provided below) became way too much of a political liability, for the Right. The more visceral extremist political ranters have been relegated to sideshows at local Holiday Inn conference rooms and late night radio (which is almost too fun to not listen to).

So we may never know what propelled this House stenographer to mention the  Masons on the floor of the House of Congress—where literally hundreds of Masons have passed all manner of legislation for a couple of centuries.  Lucky for us, they were politician and ineffectual as always—these Masonic politicians STILL have not succeeded in turning this country into one big Scottish Rite Temple. 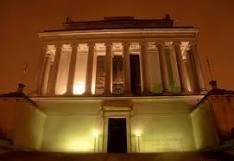 To those who are convinced that this conspiracy is real, that there is a FEMA camp waiting for all non-believers—the silencing of the House stenographer does nothing but prove their point—that she is speaking truth and has been silenced—scurried off the floor, no doubt broken under the harsh lights of Mason’s own government stooges and will soon be made to repent for her rant.

Fear of the government is not new, its probably right up there as one of the oldest tropes that people who perceive their own powerlessness deploy to make sense of their world.  Deploying the fear of the government trope takes so many forms, from the above rant over this illusive Masonic conspiracy to the tried and true rants deployed by the likes of Rev. Rafael Cruz, father of Senator Ted Cruz-TX, whose own conspiratorial excess will be something we can all fathom much longer than that poor stenographer—who, if not yet, may soon be furloughed for good.

Rev. Rafael Cruz, Cuban immigrant who made his way the way many in Texas have, through oil and gas speculation—is a celebrity preacher on the Religious Right circuit, whose roughly 8 minute speech encompasses some well-worn conspiracies—government take-over of the economy, government take-over of religious liberties, and a slow steady erosion of freedom if President Obama’s almost absolutist monarchial powers are not curbed by freedom-loving Christians.  Like the stenographer—and indeed anyone who espouses conspiracy theories—factual information is unnecessary. Cruz, a Latino evangelical pastor, makes the erroneous claims that the Founders of the U.S. were somehow conservative evangelicals. It is a fairly well-known historical fact that most, if not all founders, and if we are talking Jefferson, (since Cruz is enamored of the Declaration of Independence), we will go with Jefferson—was a Deist, if anything. For most of the Founders, their brands of Christian expression varied from marginal notions of Deism to some form of a genteel Protestantism.  Cruz deploys another common trope that the founding documents of the U.S. are divinely inspired—because, according to Cruz “they wrote them on their knees!!” But curiously, this specious historical claim comes squarely into conflict, not only with the most rudimentary of U.S. history, but it comes into conflict with—well, with the House stenographer!

When I offer these little tidbits of historical knowledge about the role of the Enlightenment and Deism on the Founders—my usually evangelical audiences look like I just kicked their dogs—often dispirited that whatever they heard on religious radio about the Founders’ proto-evangelicalism—is not historically accurate. When I go further into my myth busting mode and mention how many Presidents were Masons and had ties to the Masons—Washington, Madison, Jefferson, Monroe, the list literally goes on and on—that usually seals the deal that no “real” Christian would be involved in such an unsavory secret society.

The House stenographer’s rant expressed her incredulity that a nation under God could ever come under the influence of this timeless and totally unsubstantiated Masonic conspiracy. But it is this historical reality of the Masonic roots of many of the Founders, that lays waste to Rev. Cruz’s historically erroneous claims that these same Masonic founders—were, in fact, evangelical Christians.  Because after all, if they were Cruz’ kinda Christians, they would have never accepted Masonic initiation—and there would not be those funny all-seeing eyes on our currency. If they were Cruz’ kinda Christians, they would not have cut out the supernatural events referenced in the Bible and re-written it as a “reasoned” book of virtue and ethics (Jefferson’s Bible)—and really after all, would Cruz’s kinda Christians have held fellow human beings—many of the Christians—in chattel slavery for decades?  I even wonder if Cruz has asked himself any of these questions?  After all, if you are on a crusade for Truth—speaking to sold-out crowds over the din of the “Eye of the Tiger,” promoting your son as an “Anointed One,” you can make all the ridiculous claims you like—because unlike that powerless government worker—no one is gonna escort the Senator from Texas’ dad off the stage.

October 19, 2013 Really who cares what John MacArthur thinks?
Recent Comments
2 Comments | Leave a Comment
"The Church did not orchestrate the Massacre of St Bartholomew, but the pope ordered a ..."
John Clare The Curious Life and Death (?) ..."
"Your writings are mostly speculation.2 Corinthians 6:14 (KJV) 14 Be ye not unequally yoked together ..."
Joaquin Elias The (Un) Equally Yoked Marriage/Divorce of ..."
"http://www.c-span.org/video..."
EDDIE RAMIREZ What I Learned From Appearing on ..."
"Please do better research. The CHURCH did NOT orchestrate the St. Bartholomew's Day Massacre, not ..."
Philosophizer4Truth The Curious Life and Death (?) ..."
Browse Our Archives
get the latest from
Progressive Christian
Sign up for our newsletter
POPULAR AT PATHEOS Progressive Christian
1