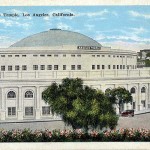 A drive past Angelus Temple today is testament to the contemporary Foursquare denomination’s ties to its founder. Though the denomination is a worldwide presence, its beginnings in Los Angeles are still celebrated as part of the legacy of Aimee Semple McPherson, affectionately known as “Sister Aimee.” For the Foursquare denomination, McPherson’s innovations as a Pentecostal pioneer are the obvious: the first woman to lead a Pentecostal denomination, one of the first to own a radio station in the West Coast, and the remarkable healing and evangelistic campaigns that made her one of the most significant religious leaders of the early 20th century. All these things are significant, but they are not what make her innovative as a Pentecostal leader. What makes her innovative chiefly can be said to be her decision to base herself in Los Angeles and avail herself of the burgeoning enterprises that would mark Los Angeles as a place that nurtures celebrity. Here is an article from a website that focuses on celebrities and their real estate http://la.curbed.com/archives/2014/04/how_americas_first_megachurch_changed_las_echo_park_1.php

McPherson, as author Richard Rayner notes in his admirable book about Los Angeles in the 1930’s, was part of rich religious amalgam of faith-cure salespeople, Eastern/esoterica/metaphysical groups, and a brimming fundamentalist bastion, headed by McPherson and her rival “Fighting” Bob Schuller. What is interesting in this context of gender, is how Rayner describes McPherson as a woman practically pushing men of the edge of the piety chairs with her “filmy, flimsy dresses.” Very much in keeping with the Los Angeles scene filled with celebrity scandal, political corruption, and economic degradation, McPherson seem to fit right in, wanting to save the worst of what L.A. had to offer. When it comes down to it, McPherson’s life, her mix with the L.A. political machine, her performances, her divorcee status, and yes, her self-consciously flowing filmy dresses, all made for a rather Noir-ish take on the founder of the Foursquare church. Her later year, the supposed kidnapping (she was allegedly abducted and taken to Mexico, a fairly common urban legend, since Mexico has played a kind of double role for Anglos living in Southern California. At once it was a vacation spot, a dangerous den of vice, a harbor for a “indigestible mass” of immigrants), and she later washed up (dry as a bone supposedly), on a beach in Southern California. Alternatives of this narrative have McPherson seen with her lover vacationing in Carmel, California, a toney hamlet in Central California, which has served since the 1920’s as an artist/writing colony as well as a quick get-away for L.A.’s celebrity class. McPherson’s death completes a very tidy Noir tale, which, if the salacious parts are true, could have been written by James M. Caine, and if not, perhaps Raymond Chandler. The point of this brief excursion to McPherson’s scandalous kidnapping is not to try make a case either way, it is to note that celebrity is what McPherson was selling most of the time, selling herself as an agent of change in the tumult of the Great Depression, as a haven from the coming Apocalypse, (hastened by America’s descent into loose morals and communist sympathizers), and of course, as a healer and evangelist extraordinaire required more than the typical showmanship she was known for—McPherson needed to make herself bigger than life, she needed to become what much of Los Angeles was becoming known for—being famous. 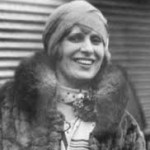 October 24, 2014 The Obsession with What Latinos Will Do This Election
Recent Comments
0 | Leave a Comment
"The Church did not orchestrate the Massacre of St Bartholomew, but the pope ordered a ..."
John Clare The Curious Life and Death (?) ..."
"Your writings are mostly speculation.2 Corinthians 6:14 (KJV) 14 Be ye not unequally yoked together ..."
Joaquin Elias The (Un) Equally Yoked Marriage/Divorce of ..."
"http://www.c-span.org/video..."
EDDIE RAMIREZ What I Learned From Appearing on ..."
"Please do better research. The CHURCH did NOT orchestrate the St. Bartholomew's Day Massacre, not ..."
Philosophizer4Truth The Curious Life and Death (?) ..."
Browse Our Archives
get the latest from
Progressive Christian
Sign up for our newsletter
POPULAR AT PATHEOS Progressive Christian
1

The Mark of the Beast: some...
slacktivist
Related posts from Re-Generaci?n