Last year the church where I serve as teaching pastor, Keller Park Church (South Bend, Indiana), celebrated its 50th anniversary—or our very own year of Jubilee. To celebrate this occasion, I preached a series on the Jubilee theme as found in the Gospel of Luke (with allusions to Isaiah and Leviticus). Below is the fourth sermon of the series. (While you’re here, check out the other sermons, Revolution, Release, and Rest-oration.)

When I was in college, I tried to keep a regular journal. The problem was that I wasn’t very disciplined. I only journaled about once every ten days or so.

And so every time I journaled, I had to rack my brain to remember what had happened since the last time I journaled. Often the only thing I could remember about a given day was what I had eaten for dinner. The result is that my journal reads a lot like the college cafeteria menu from circa 2001 to 2005.

There’s just something memorable about eating food with other people. The tastes and smells of the food reinforce the memories of the sights and sounds—even of the words that were said.

I even learned a food-related study trick in my freshman year Hebrew class. When I studied Hebrew vocab words at night, I would chew flavored gum. Then the next morning when I took my Hebrew vocab quiz, I would chew the same flavored gum. Even though there’s nothing about watermelon flavored gum that corresponds to the Hebrew word “righteousness” (zedek), somehow the watermelon smell and flavor helped me remember the meaning of the word I had studied the night before.

Jesus seems to have understood this connection between food and memory. In his last week in Jerusalem, he knew that his disciples were about to experience the most traumatic events of their young lives.

Would their memories of their time with him last?

Would they remember all the things he had taught them?

Or would their memories be erased by the trauma of his arrest and execution?

Knowing what was about to happen to him—and to his disciples—Jesus tells them, “I have eagerly desired to eat this Passover with you before I suffer.”

Then, after passing out the bread, he tells them, “This is my body given for you; do this in remembrance of me.”

Based on these words, many evangelical churches view the Lord’s Supper as what is sometimes called a memorial meal. It is a meal to remember Jesus by. Sometimes the memorial view is contrasted with other views of the Lord’s Supper.

There’s the Catholic view, called transubstantiation—in which the bread and wine is thought to become the body and blood of Jesus.

In contrast to these views, the memorial view is often described as viewing the bread and wine as merely symbolic of Jesus’s body and blood. Jesus isn’t present in communion, as in all these other views, but is merely remembered.

For those who hold to the memorial view of the Lord’s Supper, eating the bread and drinking the wine is not just a way to remember Jesus. It is a way that the church, as the body of Christ, re-members Jesus.

This is why Paul was so adamantly opposed to how the Corinthian church was celebrating the Lord’s Supper. By highlighting the differences between the rich and the poor, they were failing to properly re-member Jesus.

Jesus’s use of the Passover meal as a call to remember and re-member is rooted deeply in his Jubilee theology. Jesus’s proclamation of the year of the Lord’s favor, or year of Jubilee, in his inaugural sermon in Nazareth, is rooted in Isaiah 61, which itself is rooted in Leviticus 25.

This was not just some kind of social welfare program; it was deeply rooted in their Sabbath theology. Every seven days they were to take a day to rest, remember, and reset.

In Leviticus 24, YHWH instructs Moses to use bread and incense—taste and smell—as a memorial:

Take the finest flour and bake twelve loaves of bread, using two-tenths of an ephah for each loaf. Arrange them in two stacks, six in each stack, on the table of pure gold before the Lord. By each stack put some pure incense as a memorial portion to represent the bread and to be a food offering presented to the Lord. This bread is to be set out before the Lord regularly, Sabbath after Sabbath, on behalf of the Israelites, as a lasting covenant. It belongs to Aaron and his sons, who are to eat it in the sanctuary area, because it is a most holy part of their perpetual share of the food offerings presented to the Lord. (vv. 5–9)

YHWH describes this Sabbath meal as a memorial!

Then, following the Jubilee regulations in chapter 25, in chapter 26 YHWH describes how he will punish the Israelites for disobeying his commands. But at the end of the chapter, he offers this remarkable promise:

But if they will confess their sins and the sins of their ancestors—their unfaithfulness and their hostility toward me, which made me hostile toward them so that I sent them into the land of their enemies—then when their uncircumcised hearts are humbled and they pay for their sin, I will remember my covenant with Jacob and my covenant with Isaac and my covenant with Abraham, and I will remember the land. For the land will be deserted by them and will enjoy its sabbaths while it lies desolate without them. They will pay for their sins because they rejected my laws and abhorred my decrees. Yet in spite of this, when they are in the land of their enemies, I will not reject them or abhor them so as to destroy them completely, breaking my covenant with them. I am the Lord their God. But for their sake I will remember the covenant with their ancestors whom I brought out of Egypt in the sight of the nations to be their God. I am the Lord. (vv. 40–45)

YHWH promises that he will remember his covenant and thus re-member his people. And so it is no coincidence that after telling his disciples to eat the bread in remembrance of him, Jesus next tells his disciples, “This cup is the new covenant in my blood, which is poured out for you.”

By taking the Lord’s Supper together, not only are we remembering Jesus; Jesus is also simultaneously re-membering us as God’s new covenant people. Jesus really is present in the Lord’s Supper. Not necessarily in the bread and wine itself, as some traditions hold, but in the body gathered together to remember him.

This is the true spiritual presence of Jesus among us. 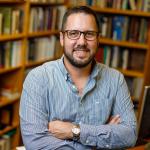 February 19, 2019 Dispatches from the Anabaptist Ecosystem (2/19/19)
Recent Comments
0 | Leave a Comment
"In the New Testament the Gospel is proclaimed that Jesus is the Lord of the ..."
the old scribe What is good news and how ..."
"Excellent article! You gave a "good answer." Thank you. The Lord is never offended by ..."
the old scribe The Syrophoenician Woman: Speaking Boldly (Mark ..."
"If anyone is interested, to back up Mr Cramer's point about twisting scripture, here's some ..."
Iain Lovejoy Priscilla: Coequal Partner and Pastor (Acts ..."
"Thanks for a great article!"
Deb Saxon Phoebe: Sister, Deacon, Saint, Spiritual Mentor, ..."
Browse Our Archives
get the latest updates from
Anabaptist Revisions
and the Patheos
Evangelical
Channel
POPULAR AT PATHEOS Evangelical
1