“For the Lord’s sake, submit to all human authority—whether the king as head of state, or the officials he has appointed. For the king has sent them to punish those who do wrong and to honor those who do right” (1 Peter 2:13–14).

“You who are slaves must submit to your masters with all respect. Do what they tell you—not only if they are kind and reasonable, but even if they are cruel. For God is pleased when, conscious of his will, you patiently endure unjust treatment” (1 Peter 2:18–19).

What do these passages have in common?

Second, they all instruct those with less power in a relationship to “submit” to those with power over them.

Third, they all give a theological rationale for such submission.

Fourth, they all seem like fairly straightforward, universal commands.

And, fifth, there’s no way they can possibly mean what they seem to mean on their face.

How do we know this?

Because we have examples in Scripture where people with less power refuse to submit to those with power over them. And instead of condemning them, the Bible commends them.

Whatever these New Testament verses mean, they can’t possibly be an unqualified, universal command for subjects, slaves, and wives to submit to their rulers, masters, and husbands.

Some Sunday we can circle back to how to understand these important New Testament teachings. But this morning I want to draw our attention to two fiercely faithful, rad women of Scripture who refuse to submit to their human authority and are commended by God for their refusal: the midwives Shiphrah and Puah.

Not only are Shiphrah and Puah commended for their resistance to Pharaoh. But, as midwives, they become a forerunner and instigator of God’s own action on behalf of Israel.

Indeed, these fiercely faithful midwives, Shiphrah and Puah, serve as an image of God’s fierce faithfulness. Following the midwives’ deliverance of Israelite babies for Pharaoh’s decree, God shows up to deliver the Israelite people from Pharaoh’s rule. In so doing, God is revealed to be the Divine Midwife of the people of Israel.

But let’s back up to set the stage for the story first.

As the first book of the Bible, Genesis, comes to a close, Joseph has just rescued Egypt and the surrounding region from seven years of famine. In return, Pharaoh invites all of Joseph’s family, around 70 individuals, to move to the best land of Egypt.

After a few hundred years have passed, Joseph’s family, the Israelites, have greatly multiplied to the point where a new king of Egypt is threatened by their sheer numbers. He has no memory of how the Israelites came to Egypt in the first place—that it was at the invitation of a previous king of Egypt after an Israelite saved the kingdom by his faithfulness to his God.

No, Pharaoh just sees the existence of this large and growing group of foreigners in their midst as a threat. In order to crush this threat, he decides to crush their will, their spirit, and their sense of humanity by making them slaves.

But even in the face of “brutal slave drivers” and “crushing labor” (Exodus 1:12), the Israelites only continue to grow. When he realizes that his ruthless demands will not crush the Israelites, Pharaoh devises a plan for extermination through infanticide. He will have the Hebrew boys killed and allow the Hebrew girls to live. In this way, he can ensure that in a generation, the Israelites will begin to die out.

Other than the sheer evil and cruelty of this plan, it has a problem: implementation. If Pharaoh sends his soldiers in to kill babies, it will create an uprising and rebellion. It must be more subtle to give him plausible deniability.

So Pharaoh calls on the Hebrew midwives, Shiphrah and Puah, to implement his plan. As midwives, they would be trusted with the delivery of the babies. And, given the general mortality rates with births at that time, they could plausibly claim that the baby boys simply did not survive the birthing process.

But what Pharaoh fails to imagine is that these midwives might refuse to submit to his authority. It is unclear whether Shiphrah and Puah are Egyptian women who serve as midwives for the Israelites or Hebrew women themselves. Either way, they are not in a position to be able to resist the orders of Pharaoh. They are Pharaoh’s subjects, women, and quite possibly slaves themselves.

And yet. And yet.

The narrative states that “because the midwives fear God, they refuse to obey the king’s orders” (Exodus 1:17). Their refusal to obey their human authority is not in opposition to their faithfulness to God but is an expression of it.

When the king calls them in for questioning, they respond: “The Hebrew women are not like the Egyptian women. They are more vigorous and have their babies so quickly that we cannot get there in time” (1:19).

It is unclear whether they are actually trying to deceive Pharaoh with this explanation or whether this is a taunt to his face: Sorry, our king, but the Hebrews are just, well, stronger than you!

Either way, their refusal to obey Pharaoh’s orders is a dangerous refusal. They are putting their lives on the line for the sake of the lives of Hebrew babies. And because of their fierce faithfulness, the story states, “God is good to the midwives” and “gives them families of their own” (1:20–21).

Meanwhile, the Israelites “continue to multiply, growing more and more powerful” (1:20). And so this part of the story ends on an ominous note. Pharaoh does away with pretenses and makes a public order to all his people to murder newborn Hebrew boys by throwing them into the Nile.

We might see this as a cautionary coda to the story: If you defy your human authorities, it could lead to escalation. But this is not the end of the story; it is only the beginning.

And so, a couple chapters later, God appears to Moses in a burning bush and says this: “I have certainly seen the affliction of my people who are in Egypt, and I have heard their cry caused by their slave masters. I really do understand their pain, so I have come down to deliver them from their domination by the Egyptians and to bring them out of that land to a good and spacious land, a land flowing with milk and honey” (Exodus 3:7–8, ISV).

Just as Shiphrah and Puah delivered Israelite babies as their human midwives, so now God says that God will deliver the Israelites from their bondage as their Divine Midwife.

Through Moses and numerous plagues and miracles, God causes Pharaoh to let the Israelites go. But then Pharaoh changes his mind and sends his soldiers after them, so that the Israelites are trapped between the Egyptian army and the sea.

And then Moses stands and calls out to the Israelites: “Don’t be afraid! Stand still and watch how the Lord will deliver you today, because you will never again see the Egyptians whom you’re looking at today. The Lord will fight for you while you keep still ”(Exodus 14:13–14, ISV).

Like a midwife reassuring a mother in labor, Moses reassures the Israelites:

And then God spreads the waters, creating a safe birthing canal for the nation of Israel. And so, writes the narrator, “On that day the Lord delivered Israel from the hand of the Egyptians” (14:30, ISV).

The nation of Israel was born that day as a free people, delivered by their Divine Midwife, the Lord.

The God of Eve, mother of all the living.

The God of Hagar, who sees the oppressed and hears their cries,

The God of Shiphrah and Puah, who delivers the oppressed and leads them to a land flowing with milk and honey. 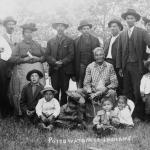 June 5, 2021 Mahlah, Noah, Hoglah, Milcha, and Tirzah: Seeking Justice (Numbers 27:1–11)
Recent Comments
0 | Leave a Comment
"Excellent article! You gave a "good answer." Thank you. The Lord is never offended by ..."
the old scribe The Syrophoenician Woman: Speaking Boldly (Mark ..."
"If anyone is interested, to back up Mr Cramer's point about twisting scripture, here's some ..."
Iain Lovejoy Priscilla: Coequal Partner and Pastor (Acts ..."
"Thanks for a great article!"
Deb Saxon Phoebe: Sister, Deacon, Saint, Spiritual Mentor, ..."
"I have Anabaptist/mennonite/Amish roots, all the way back to Switzerland. I get it. Some interesting ..."
Nora Mother Mary: Undaunted Faith (Luke 1:26–56)
Browse Our Archives
get the latest updates from
Anabaptist Revisions
and the Patheos
Evangelical
Channel
POPULAR AT PATHEOS Evangelical
1