“Hunger Strike” by Temple of the Dog brings us a duet by Pearl Jam’s Eddie Vedder and Soundgarden’s Chris Cornell. The band is largely the line-up which we better recognize as Pearl Jam, including Jeff Ament, Stone Gossard, Mike McCready, and Matt Cameron.

Maybe it is just the vocal power Vedder and Cornell combined, but few songs strike me more emotionally in the way the “Hunger Strike” does.

The image of the hunger strike in this song reminds my of DC-area homeless activist Mitch Snyder. As a kid growing up in the suburbs of Washington, DC, I remember the news stories about the activism of Mitch Snyder, including sometimes quite lengthy hunger strikes.

Here is an excerpt from a remembrance of Snyder by the National Coalition for the Homeless:

In 1981, Ronald Reagan was sworn in as President of the United States. For many the Reagan Administration is remembered for Reaganomics and ending the Cold War. Yet the poor and homeless of the time remember it rather for a dramatic reduction in housing and social services, Boss Tweed politics, and constant reminders that a mythical “welfare queen” in Chicago and exaggerated “welfare cheats” across America made their poverty their fault. “Mr. Reagan and Congress’s housing cutbacks are directly responsible for the homeless problem,” Snyder once said of the Administration.

On Thanksgiving Day 1981, tents appeared in Lafayette Park, across from the White House. A sign amidst the spread of tents read “Reaganville: Reagonomics at Work.” The tent city, an intentional throwback to the Hooverville encampments of the Great Depression, held 20-25 homeless persons and activists each night for the next four months. For many observers, a fine line had been drawn between what is real and what is theater. Such was precisely Snyder’s desire. 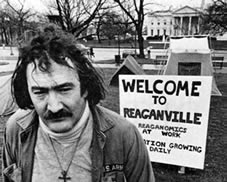 In addition to being an activist, Snyder was a self-proclaimed actor. A master of social pageantry and what now would be dubbed “street theater,” Mitch was famed for his insatiable motivation to cause a public scene. Among his exploits, he orchestrated a blood spattering of the Capitol steps, sloshed through the world’s biggest pie yelling “It’s all mine,” sat outside the White House in an old Irish tradition of waiting outside the home of someone who had wronged you without appropriate remorse, often jumped the White House fence, and, most infamously, fasted, nearly unto death three times. These actions gained significant attention to Mitch, the cause of homelessness, and helped to energize and unify many homeless persons and advocates.

Mitch, both during and after his lifetime, has been criticized for manipulative protest, particularly for his fasts demanding various rights and services for the homeless. Snyder became something of a celebrity by means of his flamboyant activism. CCNV actions Mitch organized were frequently reported in the media. One of the most famous was a CBS 60-Minutes episode featuring clips of Mitch starving from a fast as part of a protest demanding that the federal government repair the Federal City Shelter to make it livable for its 1000 plus inhabitants. The episode aired just before President Reagan’s second presidential election in 1984. With Snyder quite literally preparing to die, the federal government changed its policy and promised funds to the shelter. Manipulative or not, it is rarely said that Snyder was ineffective, and it is generally agreed that he reached and impacted diverse audiences with his message.

After all, it seems that eyes, if not cameras were always on Mitch. It was not only news media that captured Snyder’s activities. He was also the subject of books, the PBS documentary Promises to Keep, and the TV-movie Samaritan: The Mitch Snyder Story, starring Martin Sheen as Mitch. But Mitch didn’t only have an ability to make homelessness interesting, he made it the topic of the day.

It has been said of Snyder that he “never went Hollywood,” rather, “Hollywood went Mitch.” Sheen and other actors were so moved by working with Snyder that many of them donated time, money, and resources to the homelessness cause – Sheen even protested and was arrested with Snyder. In the mid to late 80’s homelessness was a social issue in vogue.

With Snyder as its visual and vocal leader, the homeless movement grew tremendously. In his time, Mitch saw not only significant change for Federal City Shelter but also in DC as a whole and in America as a nation. Snyder’s work was key in pushing homeless rights locally and nationally. He contributed to such legislation as Initiative 17, which was meant to mandate shelter for all and the McKinney-Vento Act, which provides federal homeless assistance. Snyder helped assure that the Federal City Shelter became CCNV, which did and continues to provide temporary-long-term shelter for more than 1300 DC residents.

Mitch Snyder accomplished a lot in 46 years of life, certainly more than most. The effort required took its toll. Struggling against devolution of homelessness policy in DC, as well as with a series of personal challenges, Snyder committed suicide on July 4, 1990.

As a child, I did not appreciate Mitch Snyder. I often looked down on his work…and the homeless.

No more. He is now one of my heroes.

For other posts in the “Hymns of Social Justice” series click here. 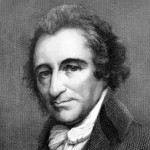 July 22, 2013
Thomas Paine on Monarchy and Hereditary Succession (Happy Birthday to the New Royal!)
Next Post 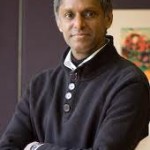