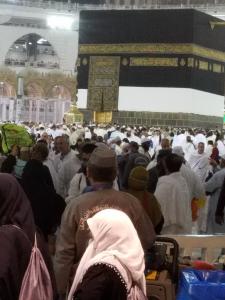 It is the Hajj season again and Muslims will be heading to the plains of Arafat, near Mecca starting today. It brings back memories when four years ago we spent a day there as an essential part of Hajj pilgrimage. This is the beginning of the 5-day Hajj period that starts in Arafat, leading to Muztalifah where we would spend the night under the sky, then head to the tent city of Mina for three nights, and will culminate in returning to Mecca to perform the farewell Umrah to complete the Hajj.

This year, like last year, no pilgrims were allowed from outside the Saudi Arabia due to the Coronavirus pandemic. The Saudi authorities have permitted 60,000 pilgrims from within the kingdom to perform one of the five pillars of Islam. Every pilgrim has received two doses of the Coronavirus vaccine and must be from of any chronic illnesses.

Normally, there are 2-3 million pilgrims from around the world who perform Hajj every year, so this is a significant drop from the normal. When I performed Hajj four years ago, there were times that I had to put my hands around my chest to make sure I had enough room for breathing. I have published posts every year since then, reliving the most amazing experience of my life. I was not a fan of the overcrowding at the time, but watching some of the live videos of the Hajj last year and this year, with more than half empty Ka’aba makes me kind of sad actually. The presence of masses, performing the same rituals with focus and purity of heart is what made my experience so memorable. I never thought I will miss the overcrowding, but I do now!

Pretty much the only relatively “negative” experience I had was the sight of the tall Mecca Royal clock tower and all the luxury hotels around Ka’aba.

Mecca clock tower is a proud symbol of the desire to turn this place into a five (or six) star experience rather than a spiritual experience. It minimizes the holiest shrine in all of Islam- literally and figuratively. It makes Mecca clock tower the center of attraction, distracting pilgrims from Ka’aba.

I cannot get over the sight of the pilgrims taking the picture of the tower, the third tallest building in the world, while looking at the Ka’aba in the foreground! Compared to the giant tower, Ka’aba looks diminutive. I am not sure why some of the pilgrims are so obsessed with something that is so counter to the whole Hajj experience. Hajj is about humbling ourselves, purifying our hearts, putting the worldly luxuries behind us (or at least put it in perspective), and equality, where every pilgrim has, regardless of their socio-economic status, the same white outfit (Ahraam)  which is basically made up of two pieces of towels wrapped around the body for male pilgrims. Women also wear very simple clothes.

I understand that despite these distractions, most pilgrims are able to focus on the worship and various Hajj rituals to strengthen their connection with One true God, but I am still lost as to why they needed to build something right next to the holiest shrine in Islam that can overshadow it, and probably even more lost as to why some of us would have the urge to take pictures of the tower, or even think about it when inside the Haram (the large compound surrounding Ka’aba).

The last thing we want to think back when thinking about the most amazing trip of our lives is the cluster of luxurious tall buildings around Ka’aba, especially the Mecca clock tower. For most, if not all, pilgrims (Hajjis), Hajj has been a life-changing experience, and they return home more humble, with their hearts purified from all the worldly pollution. With the passing of time, and as we get back into the ‘rat race’, the hearts do lose some of that purity. I am feeling a renewal is in order.

I cannot wait to get back there one of these days, InshaAllah (God Willing).

July 26, 2021 Islam Means Submission-Submission in the Qur'an and the Bible
Recent Comments
0 | Leave a Comment
"sadly too many Americans never ask the real question "who is the god of America?" ..."
Wesley  IN GOD WE TRUST
"Coming zoon joker gaming"
moz1  Nativity in Islam and Baby Jesus ..."
""
Legendgerry  Ramadan: It’s the Most Wonderful Time ..."
""
Alexander Hemming  How do Muslims Observe Ashura Worldwide?
Browse Our Archives
Related posts from Ask A (Born Again) Muslim