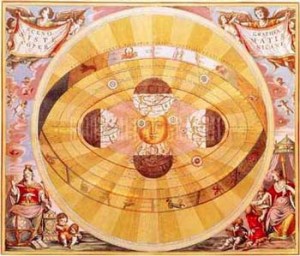 Much of this article was originally posted in July of 2007.  Chris Brennan and Eric Meyers recently participated in a lengthy debate comparing traditional and modern astrology which you can listen to here.

Somewhere along the line astrologers split into two camps as some moved forward into humanistic or psychological astrology (leading into evolutionary and transformational astrology) and some moved backwards towards traditional or medieval astrology. Rob Hand was one of my favorite authors, and his book Planets in Transit is still one of the very best resources available on that subject. In 1992, just as Uranus and Neptune conjoined in Capricorn where the flood of new ideas (Uranus) confused and befuddled (Neptune) established conventions (Capricorn), Rob began a study and collection of ancient astrological texts called Project Hindsight. I’ll come back to Rob Hand in a moment.

Modern astrology has its roots in the work of Dane Rudhyar, who pioneered the concept of self-actualization through the astrological system in what he called “humanistic astrology” which was more psychological in nature than the predictive astrological system of the past that was more event-oriented than person-centered. Although Rudhyar had studied and written about astrology since the 1920s, it wasn’t until the Uranus/Pluto conjunction of the 1960s that he revolutionized the astrological world with his book The Astrology of Personality. Rudhyar had been influenced in the 1930s by the archetypal studies of Carl Jung and depth psychology, and he utilized these ideas in his revolutionary approach to the new astrology.

Chiron’s discovery in the late 1970s brought with it the ancient idea that the key to healing is found within the wound, accelerating the movement towards an astrological system that provided healing of psychological wounds. The outer planets (Uranus, Neptune and Pluto) became known as the “transpersonal” planets which accelerated that personal growth and healing from outside of the individual, and the inner planets were revealed as functions of the inner world of the person.

Predictably, after the “New Age” explosion of the Uranus/Neptune conjunction there was a backlash in the astrological world against modern astrology which, rejecting the classic attributes of certain planets as “bad” or “good” and instead as tools for change, they considered “mushy” and unscientific. As most conservatives do, traditional astrologers find comfort in the past and are reluctant to move forward into the unknown, which they find frightening and without regulation. A recent interview with Ben Dykes on the fabulous Skyscript site reveals a basic lack of understanding of “modern” astrology that is found in non-astrologer skeptics:

First of all, I believe much modern astrology is plagued by a lack of clear instruction, inconsistent and unclear delineation techniques, and rather poor predictive techniques. Now, the idea that there is something lacking technically in modern astrology, might seem strange. There are so many books, so many authors, so many different ways to do astrology! But what I found was that much of it is treated either anecdotally, or subjectively, or without the sense that one can know whether one understands what is being taught. I felt as though I ought to have some vivid personal “feeling” about, say, what Virgo was. Since I didn’t have this feeling, I thought maybe I was hopelessly doomed to fail at astrology. [While it’s true that there are many different approaches to modern astrology, there certainly is a basic understanding of the twelve zodiac signs.]

Consider that there are many psychological or pseudopsychological approaches to astrology – but what if one is not a Jungian (or Freudian, or whatever)? Or there are scads of asteroids and other new bodies – what justification is there for using them in the ways they are, not to mention as substitutes for the traditional planets? For instance, why should Pluto now cause difficulties with power and violence, but not Saturn? Nowadays Saturn has been demoted to being the planet that kindly points out our limitations. [This is incorrect – Saturn is known as the “Celestial Taskmaster” who is often far less than kind.] Or one is supposed to use mental associations of symbols in order to delineate – but how do I really know whether this native’s Moon has anything to do with blood, water, vaginas, caves, witchcraft, and all the other possible associations one can make (I’m thinking of Liz Greene here)? [It’s hard to believe that Mr. Dykes has read Ms. Greene’s work, in which I have never seen vaginas or witchcraft mentioned although she may have thrown in a cave or two.] Again, plenty of modern astrologers insist they have their own personal ways of doing things – but why should the stars obey us, rather than the other way around? [Again, this shows a complete lack of understanding of the way modern astrology has evolved. Astrologers have not commanded the “new” outer planets; their influence has been clearly noted through painstaking research and observation.] Finally, there is so much emphasis on a native’s character, that astrology seemed plagued with self-absorption. [This is the same argument that has been made about all of the “self-help” processes since the birth of psychology in the 1930s, along with the discovery of Pluto.] This is especially true in people’s dependence on the trans-Saturnian planets to explain, and find pleasure in, their own problems. [ Explaining the problems is only the first part – the second step is in using this knowledge to help the individual work through those problems and heal dysfunction.]

Rob Hand has a better understanding of modern astrology, which he practiced before rediscovering and falling in love with the ancient texts. Rob says:

The single most important advance in 20th century astrology was the recognition that astrology actually could be used as a tool for human potential and self-actualization. There may be some of this in Jyotish, but there certainly is not any of it in Hellenistic, Arabic or Latin medieval. All three of those traditions were completely oriented towards dealing with everyday, mundane situations. But Dane Rudhyar in particular introduced a radically new way of thinking about astrology. Closely related to his astrology is the idea of psychological astrology. I do not share the contempt that many traditionalists feel for psychological astrology. I think it is extraordinarily important. My only criticism of it is that in the hands of some of it’s less competent practitioners it has been an extremely mushy sort of astrology where anything can be made to mean anything, depending on the emotional frame of mind of the client and the astrologer. The language of 20th century astrology as a language tends to be imprecise, vague, inarticulate and unclear. But the goals of 20th century astrology are absolutely commendable. …

As with everything else, balance is the key. Many traditionalists are disturbed at the lack of educational foundation of modern astrologers, as they should be. Before we can step into the future we must understand the past. But remaining rooted in the past because we fear the unknown is short-sighted in the extreme. There is no doubt that human understanding and knowledge is growing by leaps and bounds in all areas of life, including a scientific understanding of the workings of the universe. Why should astrology, the study of the planets, not keep pace with this?

September 10, 2014 The trial of Oscar Pistorius
Recent Comments
0 | Leave a Comment
Browse Our Archives
get the latest from
New Visions
Sign up for our newsletter
POPULAR AT PATHEOS New Visions
1