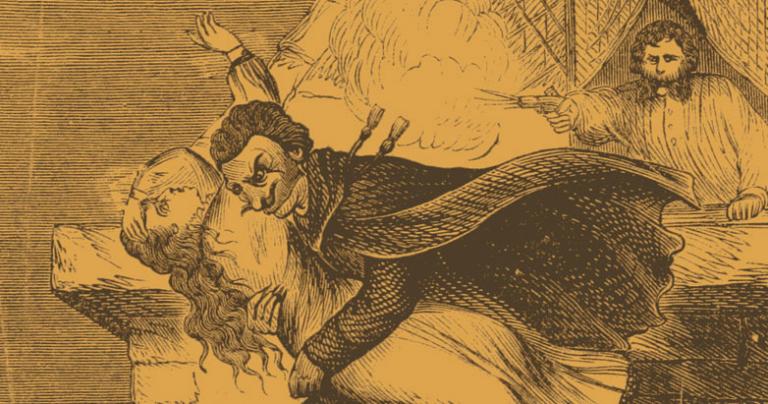 All Hallows Eve is upon us
A time for tales that scare and fright.
Not all monsters are fiction,
Some very real, dark creatures stalk the night.

This first story is special,
For I know the area intimately,
It’s where my family lived, worked and died,
South London in Clapham and Battersea.

Spring Heeled Jack was his name,
No one knew what he was,
But much fear he was to blame.

I’m not sure what’s scarier,
Jack’s red eyes or his claws,
He had the ability to jump high effortlessly,
Over walls 9-feet or more.

Mary Stevens was on her way home,
Along Lavender Hill one October night,
When from a dark alley way,
Jack jumped out and gave her a fright.

He grabbed her arms to hold her still,
Keeping her in a tight embrace.
He ripped her costume feather boas with his claws,
Then kissed her on the face.

In terror Mary screamed,
Spring Heeled Jack ran away,
Gone but not for long,
He was seen the very next day.

Jack didn’t grab another girl,
He jumped in front of a carriage,
The coachman swerved but hit a building,
Doing himself some serious damage.

Jack roared with laughter,
And fled in a single bound over a nine-foot wall.
Jack was spotted many times all over Britain,
The last being 1904 in Liverpool.

Let’s leave behind the gloom of London,
Grab your broom, we’re off for a ride.
We’re heading to the Caribbean,
October 1995.

In the town of Canovanas in Puerto Rico,
We find Luis Guadaloupe distraught and shaken,
For he’d just seen a terrible creature,

A demon if he wasn’t mistaken.

The day started for Luis just as normal,
All was going well,
Until he caught sight of a monster,
Which gave off a Sulphur-like smell.

Bounding about like a kangaroo,
The ugly creature was about four-foot high,
Its skin was a greyish colour,
Which could change in a blink of its red eye.

This wasn’t the first sighting of the creature,
It had been seen many times before.
One unlucky police officer saw it,
The shock made him fall unconscious to the floor.

Other troubles had been plaguing the island,
Livestock kept ending up deceased,
Poor animals killed and their blood drained,
At the hands of an unknown beast.

Before too long the beast had a name,
Chupacabra it was called,
Some thought it a devil and others a wild dog,
Regardless, it didn’t stop animals being mauled.

To make this tale even stranger,
UFOs were seen all over the place,
Strange lights and crafts were sighted,
Could Chupacabra come from outer space?

The monster is still about today in Puerto Rico,
But it’s ventured further to Mexico and the US of A,
So keep your animals locked up tight,
And put your wards up to keep the Chupacabra at bay. 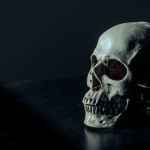 October 19, 2018
Samhain Ritual to the Unknown Ancestors
Next Post 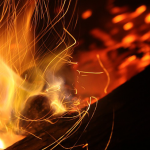 What It Means To Put Your...
John Beckett
Related posts from Away with the Witch!