Away with the Witch!
Pagan

Unravelling What It Means To Be A Witch

While having my haircut earlier today, I asked the stylist how long she had been working in hairdressing.  “Since I left school, which was six years ago.  But before then, I would help my mum’s hairdresser.  It’s all I’ve ever wanted to do,” she said, before continuing: “I get the odd twinge in my back these days so I’ve got to look after myself so I can be hairdressing for the next fifty years.”

Apart from feeling quite old as my greying hair was snipped by a 22-year-old (she was amazing, by the way), I admired her certainty on knowing what she wanted to do.  Being a hair stylist was her calling and she had no plans to stop in the next half a century.

In comparison, I have never felt a calling to a particular job but I have, for as long as I can remember, been called to the mysteries of existence and experiences not explained by science or reason.  Even through my earlier adult years when I was trying so hard to be normal, I knew there was something else that supported the world around us.  Something just under the surface.  Something that, if you suspended logic, it could be felt, touched, manipulated.

This mysterious, universal underpinning thing is a bit like a computer operating system.  It’s running all the time, keeping everything in order but if you want to access or manipulate the code, you need the right software.  To me, witchcraft is the right program.

Over the past year or so, I’ve been researching witchcraft and questioning what it really means to be a witch.  It’s a label I’ve adopted for almost twenty years because it’s the closest I could find that felt right.

And yet, my research has brought more questions than answers.  Witchcraft is a contentious word, and not one you would want to publicly claim affiliation to in some parts of the world….. heads would roll, literally.

Contemporary witchcraft is a mixed bag.

It bears little resemblance to the practice of the continental witches brought to trial in the witch-craze with their blood-fed familiars, bubbling cauldrons full of spare baby-parts and night time booty calls with the devil.

Witchcraft has become political and a source of power for a population that feels powerless.  It’s become a feminist movement and a source of refuge for pockets of society that feel misaligned with the general population.  It’s now a tool for self help and self development.  It’s a practice that connects the self with something other, a modern day spirituality that doesn’t have to be dark and dangerous – in fact, witchcraft is now Instagram pretty.  Witchcraft is riding a trend and with that comes a hefty dose of commercialism.

And yet, this isn’t what my spirit connected to when it found witchcraft.  It was more of a feeling, a home coming.  Lee Morgan, in A Deed Without A Name, describes it better than I do:

“What we often forget is that whilst there is an ancient and eternal ‘deed without a name’ that lies behind the word, the word itself is little more than a site where numerous tales cluster. Those who choose the path, or are chosen for the path, of witchcraft usually have a gut-level sense of what the word means. They are drawn inexorably to a collection of images, a vague narrative which has to do with night-flights in spirit form, the crossing of hedges and boundaries, boiling cauldrons and wild dances in wild places where the dead appear, and where animal transformation and acts of sorcery occur.”

Through my own personal understanding and practice of witchcraft, I believe the word I’m trying to reach when I talk about my witchcraft has been lost in the English language (although maybe it is older and never existed?).  I associate it more with shamanic practices than mainstream witch trends.

I also look at the conjurers, wise women, white witches, cunning folk and wizards that provided a community service and feel it’s an important aspect of witchcraft that gets overlooked today.  Contemporary witchcraft can be self-absorbed.

I doubt I’ll ever come across the exact word I’m looking for to describe how I feel about witchcraft.  Where would the fun be in that?  So I’ll continue searching, discovering and unravelling what it means to be a witch (probably for the next fifty years, at least). 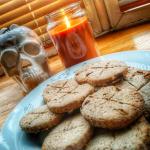 October 17, 2019
Soul Cakes for the Living and the Dead
Next Post

January 19, 2020 The Magic of Moving
Recent Comments
2 Comments | Leave a Comment
Browse Our Archives
Related posts from Away with the Witch!