When I get asked what my religion is I almost always answer “Pagan” and move on from there. Usually the first response is “Oh, you’re Wiccan?” I also get “Oh, my mother-in-law/niece/cousin’s girlfriend/and so on is a Wiccan!” Without fail I tell them I’m not Wiccan. Part of this is a desire for clarity (I practice an American form of Traditional Witchcraft and have a Hindu devotion). Part of it is a desire not to be lumped in with Wiccans. Because, in all honesty, I’m a hater.

When I began my meandering path away from Christianity fourteen years ago, all the while delving more deeply into the Eastern Orthodox tradition, I started with feminist theology and spiritualities. Several Goddess-centric books got me all fired up: Merlin Stone’s When God Was a Woman, Tykva-Frymer Kensky’s In the Wake of the Goddesses, Jean Markale’s The Great Goddess, and Starhawk’s The Spiral Dance. The Virgin Mary (aka the Theotokos in the Eastern Orthodox churches) became ever more a focus of my thoughts and devotions. This led me to Wicca. 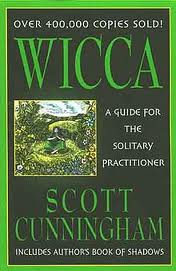 In 2001 most of what I could find out about Paganism on the internet or in bookstores was Wiccan. I joined a few forums, most of them filled with kind, older ladies who were in touch with their “sacred femininity” and believed that “every woman is born a witch.” I read several books; the good ones I remember were by Scott Cunningham. The best parts empowered me to take my practice into my own hands, to reach out to gods who would reach back, and to tap into the elements existing all around me. Yet, the duotheism – pervasive talk about the Lord and Lady, necessary in nearly every casting – did not make any theological sense to me. Neither did the idea that the gods were archetypes. Nor did the gender essentialism I encountered on the forums or in the fertility-based writings of what I could find about Wicca. As a queer feminist who is often the ‘masculine’ one in a relationship, and at that time in a lesbian relationship, Wicca not only did not appeal to my developing inner theologian, it didn’t resonate with my lived experience.

So I wrote off Paganism, especially Wicca.

Fast forward a few years. In a small Berkeley bookstore I discovered T Thorn Coyle’s Evolutionary Witchcraft . Now there was some theology that resonated! It too involved casting a circle, but it was not necessary. There were male and female gods – but also gods who were both, or neither, or a blur of the genders. So many other aspects of Feri made sense to my lived experience. And I finally found out that Starhawk was a Feri initiate. The pieces came together. I’ve never looked back.

Over the years little about Wicca has interested me or caused me to reassess my biases. Much of what I didn’t like about it only seemed to be confirmed. But if Jason Mankey (my fine fellow blogger over at Raise the Horns) had been writing all those years ago, I might very well have become a Wiccan. The positive aspects of Wicca – and the broader Traditional Witchcraft ‘family’ – have been becoming increasingly clear to me over the last few years. But Mankey’s love of, enthusiasm for, and clear explanations of Wicca highlight just how wrong I’ve been all these years.

Jason’s recent post, Why Wicca?, is a great starting place for some one interested in what Wicca has to offer. However, what he has highlighted are the very things that I find positive about many traditions in Paganism – including my own Feri tradition. Reading his post reminded me of the positives I found in Scott Cunningham’s books. Taking control of liturgy for myself, developing my concentration and intuition, and learning some basics about correspondences and herbalism were important first steps for me on my spiritual path.

So why not take a second look at Wicca? Well, Jason has written another post, this one from yesterday, about some of the theology that gets promulgated in popular and important books on Wicca. Two of those books are ones I read in my ‘formative’ years – and they put me off with their depictions of duotheism. But what I’m finding as I get to know more Wiccans and read more blogs by Wiccans is that the apparent duotheism is misleading and not all that accurate.

And yet. I need more theology in my craft. I also don’t want to need hierarchies, high priests or priestesses. I don’t want to focus on fertility aspects – I have found a heavy emphasis on male and female energies, aspects, and symbols in a lot of Wiccan rituals. I also find the focus on the Wheel of the Year to be problematic, as many the land and seasons in many places don’t line up with the seasonal timing found on the Wheel. 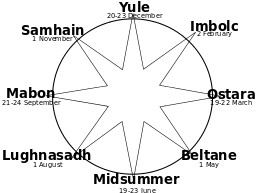 None of those things are hard and fast rules in Wicca, but overall that’s what I’ve found. At the core of my spiritual choice is that I’ve found other traditions that speak to me, that provide me with more meaty theology, and that also work. But I’ve been gaining a deeper appreciation for Wicca. I’m glad to find out that I’ve been wrong about so much of it!

March 31, 2014 Vasanta Navratri
Recent Comments
12 Comments | Leave a Comment
"Did you ever read about St. Seraphim of Sarov? He is an Orthodox saint who ..."
stonecold What I Miss About Being A ..."
"Contemplation is a good beginning... Introspect, contemplate, initiate and once you find what you seek... ..."
Gourish Bakhshi Shiva the Witch God
"Wiccans can be polytheists too! Jason Mankey deftly proved this at last year's MGW. You ..."
A Witch's Ashram Many Gods West 2016
"Congratulations! I'm glad to hear this will continue. If you'll have a Wiccan among you, ..."
Sable Aradia Many Gods West 2016
Browse Our Archives
get the latest from
Pagan
Sign up for our newsletter
POPULAR AT PATHEOS Pagan
1

Creating Spirit Ally Relationships With Your...
3 Pagans and a Cat
Related posts from A Witch's Ashram