Reach Out and Touch Faith

[Written at the beginning of my blog project, when I was just getting to know Hinduism. I still feel that this post speaks to my experience.]

In the Evangelical Christian world it’s all about one’s personal relationship with Jesus Christ. As hard as I tried I never felt close to Jesus. I felt more connected to the abstract, supposedly more transcendent Great Big God than I did to the incarnated Son. Perhaps it was because I felt that God was already imminent and alive to me in the mountains and waterways of my land. I didn’t know it then, but I had a firm grasp of panentheism. Jesus was a fascinating character, a wise and cantankerous teacher, but he did not speak to me in the here and now in the way that I felt the Great Big God did.

Even as I moved from Evangelical ideas of Christianity to worshiping with the Eastern Orthodox Church I still felt like I was missing something. The Eastern Orthodox, and much of the Roman Catholic world, do not place as much emphasis on the personal relationship with Jesus as does the Protestant world. But still: don’t we want our Gods to know us? Don’t we hope or even expect to know them?

My loose affiliation with the Pagan world led me to believe that this might be possible and might even be the norm! Plenty of people talk about Gods and/or Goddesses calling them, choosing them, appearing in visions, or even possessing them. I’ve had perhaps only one experience that might even closely resemble anything like that.

It’s not that I don’t feel God’s presence – I do. Sometimes I feel it like a powerful current; sometimes it’s like when you’re hiking and looking up at the trees and without noticing the small stream ahead you plunge your foot down into the icy waters. Sometimes I have to seek out that presence. Sometimes I have to work hard – sit in meditation for twice as long. But rarely is it personal. Rarely is it about ME. 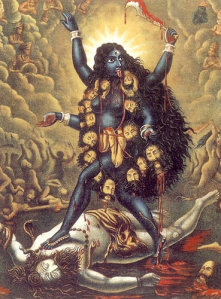 So now that I’m engaging with Hinduism in a daily way I find that this is what I most often trip over: am I supposed to be having a personal interaction with the Gods? I have long been drawn to Kali. The Shakti/Shiva understanding of the world speaks to my conception of the universe. And who can’t get behind Ganesha? He’s just so darn likable. But are they just representations of cosmic forces (just, right? like that wouldn’t be enough)? Or are they real, present, living Gods that get involved? 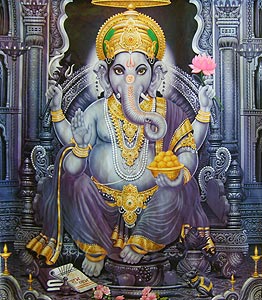 Ganesh, Remover of All Obstacles

So far my experience and thoughts suggest: yes. To both. But I’m not convinced that the God/s get involved with us on the minute level that many of us of Christian extraction expect. And I like that. I think there is something deeply selfish (as opposed to self-centered, which phrasing suggests something good to me) in the way that Christianity makes salvation and other ideas so specifically personal, as if everything we think, say and do has eternal weight. I do think that karma applies, the cause and effect of our actions. But does the Ground of Being listen in on everything we think? Does the Great Universal Creator hear us when we’re searching for a parking space? I’m going to say no. Could it? Sure. But I think this is where the appeal of many gods comes in: I need the rice to turn out perfectly for an important dinner party, so I pray to Lakshmi, element/goddess of the home and success, or to Ganesh to overcome any obstacles in my preparations. Why go to the top when Hir agents are available?

In my experience of worshiping as a Hindu I’ve only had two moments of feeling a connection with Kali, a feeling that went beyond the intellectual ‘oh her story and symbolism is really neat;’ a feeling that maybe she was poking by to see who is this new person that keeps calling her name. The Pagan in me thinks this is about right – all relationships take time. My Christian past is just flat-out appalled.

For those of you practicing Hinduism in any form, what has been your experience? Those of you engaged with the Hindu pantheon, what have your relationships been like? For anyone, how did you choose the gods you venerate? Or did they choose you?

(Title reference to Personal Jesus by Depeche Mode. Until linking to this, I had never seen the video. A Western?!)

May 16, 2014 On Dietrich Bonhoeffer's Cost of Discipleship: the Cost of Being a Woman and Other
Recent Comments
4 Comments | Leave a Comment
"Did you ever read about St. Seraphim of Sarov? He is an Orthodox saint who ..."
stonecold What I Miss About Being A ..."
"Contemplation is a good beginning... Introspect, contemplate, initiate and once you find what you seek... ..."
Gourish Bakhshi Shiva the Witch God
"Wiccans can be polytheists too! Jason Mankey deftly proved this at last year's MGW. You ..."
A Witch's Ashram Many Gods West 2016
"Congratulations! I'm glad to hear this will continue. If you'll have a Wiccan among you, ..."
Sable Aradia Many Gods West 2016
Browse Our Archives
get the latest from
Pagan
Sign up for our newsletter
POPULAR AT PATHEOS Pagan
1