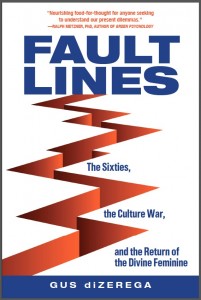 Gus DiZerega is a scholar and blogger – in fact, he writes regularly here at Patheos Pagan! His most recent book is Fault Lines: The Sixties, the Culture War, and the Return of the Divine Feminine. I’ve spent most of my advanced academic career studying the Divine Feminine in one form or another, so I was interested in what a smart, Pagan scholar would have to say about this topic. I am disappointed to report that this book is underwhelming.

DiZerega spends most of the book detailing how Western philosophy and politics are overwhelmingly masculine in mindset and actively dismiss and denigrate anything considered feminine. This means that reason is considered masculine to the exclusion of intuitive ‘feminine’ ways of knowing; all things intellectual are privileged over anything ‘earthy.’ Collaboration and community are dismissed in the face of dominance and the individual. DiZerega chronicles how feminine ways of thinking started to re-emerge in the 1960s and how feminine thinking is the way forward.

For those whose hackles start to raise at the mention of things ‘masculine’ and ‘feminine’ (and I’m one of those, because typically those words are misused), rest assured that DiZerega does not use these terms incorrectly and he specifically avoids any form of gender essentialism. In fact, he does a great job succinctly explaining the difference between liberal feminism and cultural feminism. He also demonstrates an understanding of feminist theology in the 20th century.

Throughout DiZerega has links to larger topics and more writing in an online appendix. Some of these appendices are more interesting than the sections in the book and I think his overall argument would have been stronger if he had found a way to integrate these into Fault Lines. I’m not sure where the editor was, but the entire project needed better editing.

I was also disappointed with some of the political jabs and DiZerega’s choice of certain sources. This is not a book to give to your conservative in-laws, as some of the wording is slanted against Republicans in tone. Unfortunately, two of the sources I followed up on did not help. One was a wikipedia source. I expect more from a trained scholar. The second was from a super liberal, satire site. On page 106 DiZerega quotes Larry Summers, from 1991, who was the World Bank’s chief economist at that time. DiZerega takes this quote from a leaked memo cited on a website called “Whirled Bank”. This satire site did not seem like a legitimate source, so I followed up with research of my own and found that the New York Times had reported on this memo in 1992. Apparently, Summers was so aghast at some of the recommendations from another office within the World Bank that he put his name on a sarcastic memo. Whether or not Summers was being sarcastic (and I sure hope he was), it is disingenuous of DiZerega to present this statement as fact.

I found DiZerega’s book too focused on building his argument – he only gets to his main idea in chapter 10 and devotes only 30 or so pages to it! I ended the book wondering just what exactly his book was supposed to be about. However, along with his definition of feminism, he expertly explains several other terms that often get muddled about in contemporary discussion. While this book would not be a good choice for classroom use or required reading, several of the paragraphs and sections could be enormously helpful.

I should be the choir to DiZerega’s preaching. I’m no fan of the Democrats, but I lean far more left than I do right. I support the revitalization of culture and relationship that embracing a divine Feminine can bring. I am the target audience for this book and yet….. I was bored. Part of the blame is surely due to bad (or no) editing. I didn’t notice any typos, but the book read like a first draft. I hope that these ideas can find a better way to reach their target audience.

August 26, 2014 Magic Amongst the Mundane
Recent Comments
9 Comments | Leave a Comment
"Did you ever read about St. Seraphim of Sarov? He is an Orthodox saint who ..."
stonecold What I Miss About Being A ..."
"Contemplation is a good beginning... Introspect, contemplate, initiate and once you find what you seek... ..."
Gourish Bakhshi Shiva the Witch God
"Wiccans can be polytheists too! Jason Mankey deftly proved this at last year's MGW. You ..."
A Witch's Ashram Many Gods West 2016
"Congratulations! I'm glad to hear this will continue. If you'll have a Wiccan among you, ..."
Sable Aradia Many Gods West 2016
Browse Our Archives
Related posts from A Witch's Ashram