Towards a Theology of Indie Rock

Indie-rock [1] musicians have a wonderfully strange fascination with the Church. I don’t mean to dunk them all in baptismal water — their overt flirtation with The Holy Catholic Faith ranges from “strained,” to “profound,” to “don’t sing that in front of my Italian mother, you blaspheming ass.” But it’s a puzzle worth puzzling over. Take Florence + The Machine.

Her new album, How Big, How Blue, How Beautiful, wrestles with terror of freedom after the slavery of an erotic love. She takes the John-of-the-Cross style imagery apparent in earlier songs like “Cosmic Love” and runs with it, to the point that it’s difficult to find songs that aren’t dripping with catholicity. St. Jude shows up. “Various storms and saints” are “praying in the street.” “Crucifixes and Hollywood signs” litter apocalyptic landscapes, and the Mother of God is a pervasive presence, both in the prayer/scream “Mother, make me / Make me a song so sweet / Heaven trembles, fallen at our feet” and in the song “Queen of Peace,” which gives an account of the Passion happy-go-lucky Christianity could certainly give an ear to:

Oh, the king
Gone mad within his suffering
Called out for relief
Someone cure him of his grief

His only son
Cut down, but the battle won
Oh, what is it worth
When all that’s left is hurt

Sufjan Stevens has his sacramental moments. Shakey Graves’ latest album addresses the whole thing rather directly: “You went where no one would follow / so I hid in the mud of my Catholic blood / and let that minute hand face towards tomorrow.” Coldplay takes the “missionaries in a foreign field” as their model. The Shins’ corpus is speckled with the stuff, as in their song “Saint Simon“, where we bemoan that “though the saints of us / divine in ancient fading lines / their sentiment is just as hard to pluck from the vine” and rejoice that “Mercy’s eyes are blue / when she places them in front of you / nothing holds a Roman Candle to / the sudden warmth you feel inside.”

Death Cab for Cutie devote a few songs every album to wrestle with the faith they, generally speaking, seem to reject — from that well known criticism “Catholic school/ vicious as Roman rule / I got my knuckles bruised / by a lady in black” to the lesser known “Saint Peter’s Cathedral” from their album Codes & Keys:

At Saint Peter’s Cathedral
There is stained glass,
there’s a steeple
that is reaching
up towards the heavens,
such ambition never failing
to amaze me.

It’s either quite a master plan
or just chemicals that help us understand
that when our hearts stop ticking
this is the end
there’s nothing past this. It’s clear enough that the use of Catholic iconography doesn’t always amount to belief. Mewithoutyou are the kings of aesthetic Catholicism. Their’s is an ADHD-riddled, Wasteland-esque delight in the Holy Faith as a source of images, oblique references, and wild metaphors — though not without enough moments of earnestness to make the listener wonder whether this stuff is more than a stockpile of poetry. Their new album — Pale Horses — includes (besides the coolest appropriation of “Leaning on the Everlasting Arms” I’ve ever heard) the (incredibly wise) lyric “this is not the first time God has died” and the (totally understandable) fear: “Are you a God, and shall your grace grow weary of your saints?” And I don’t really think this is a recent trend: Pond’s 1997 album Rock Collection, which deserves some kind of medal for meticulously calculated weirdness, revolves around narrative descriptions of a simultaneously badass and frightening Catholic girl, who’d “make a great nun,” whose “fingers twist beads, wringing out the prayers from rosaries and medals that she wears,” who, “With St. Christopher on the dash / is safe from any crash / at least she believes. / What she doesn’t realize / is that he’s been decanonized by the Church.” (He’s been nothing of the sort.)

Protestantism has little love-relation with the weird world of rock n’ roll. Perhaps the latter is still salty about being condemned to Hell for cranking the overdrive past “4” and singing about sex. But the usual rock reference to a general Protestant Christianity goes no further than the light irony of Ben Folds’ “Jesusland”, or the similar culturally-critical stuff of, say, As Tall As Lion’s “In Case of Rapture”.

I’m open to correction, and more than ready to dance to a dark, embattled groove wrestling with the finer points of Presbyterianism, but so far all I’m hearing is bloody statues, Eucharistic hosts, and cathedrals. Catholicism seems to have become a kind of reference point even for unbelief, a belief with the sustenance to really take the fist of a polemic or the stab of rejection. This seems clearer when we try to imagine Death Cab bravely rejecting non-denominational doctrines. But rather than list up the references, I’d like to propose a link, one that dives a little deeper than “Catholicism has pretty pictures, and artists like pretty pictures” — though damn, is it true.

The Similarity Between Jesus and Singer-Songwriters

American-style Buddhism, while it often forms the vaguely-adhered-to doctrine of contemporary musicians, rarely makes it into the content of a song. Buddhism stresses a detachment from strife, a rising-above the passions and heartaches of life, in order to be supremely unaffected by suffering. One can hear the ideals of Buddhism in their monastic mantra — single, sustained, unified, eternity-tinged notes, without words, without content, and — it seems — without end. Indie-rock, for its part, is characterized by its frenetic drive for meaning in apparent meaninglessness, by its lyrical swoop into the purple heart of the broken, sorrowful, mundane, horrible, nonsensical, uncontrollable, passionate and despairing parts of life. If Buddhist chant seeks to transcend suffering, indie-rock seeks to become it. If the sound of Buddhist chant is ontological, purporting to achieve a unity of all things, then indie-rock is christological, purporting to take — in voice, in sound, in lyric — the very character of the ache it sings.

When Mumford cries “I really f*cked up this time,” and we hear that, yes, he really did; when Kyle Morton of Typhoon screams “I will be good though my body be broken,” and his voice takes on the very quality of a wrenching strive towards “being good” — here we see the basic movement of the Christ being lived out an aesthetic level. Christ “becomes sin.” He preaches no doctrine of transcendence. His doctrine is the Cross, a radical act of becoming the suffering he seeks to save us from. He offers no sideline advice, but enters into the losing game of humanity — to lose with us. The difference between him and every “religious teacher” is that a religious teacher can tell us the truth about sin and suffering, but only Christ can become the sin and suffering of all of humanity; can marry a broken, sorrowful existence.

The singer-songwriter becomes pain, becomes longing, becomes heartache, lives it out in the infinitely flexible possibilities of the human voice. This is the strength and the weakness of the indie-rock voice in comparison with the operatic. The former is expected to break, to scream, to growl, to moan, to grunt, to stutter, to really and personally “take on” the content of the song, whereas the classically-understood voice thrives precisely in maintaining a form of technical proficiency throughout the various emotions — never, in its mighty range of expression, really becoming a scream.

But it is not enough that a rock musician becomes suffering. He could scream out of his window and achieve the same effect. It must be redemptive. Suffering sung is suffering that has been separated from the singer’s life and given a new life as an object apart from him and the turmoil with which he lives it. As song, the ugly, lonely, unbearable fact of suffering is made beautiful, bearable, and a gift for all who hear it. It dies as a presently-lived heartache and rises to new life as an aesthetic object — a heartache observable, enjoyable, saved. And may we not say that the greater the pain, the greater the possibility for an incredible song? Is this not a law of songwriting — the hotter the longing, the deeper the satisfaction with which we hear the unbearable made bearable, and the sorrow made sweet? But this too is a christological principle — the Church calls the sin of mankind a “happy fault” because it “won for us so great a redeemer.” Where sin abounds, grace abounds the more. Christ’s redemption is all the more glorious for our misery.

To put all this in summary: The songwriter imitates on an aesthetic level what Christ achieves on the level of reality. He becomes the suffering he sings, and in doing so kills his suffering as suffering, resurrecting it as song, in a new birth which can be participated in by his audience. So its not entirely surprising to me that an aesthetically christological craft finds it home in the images of a really christological Church. Whether they’ll make the leap from the aesthetic to the religious — from momentary redemption to eternal redemption — is really up to them.

[1] Like pornography, I know indie-rock when I see it. The name is not descriptive (it only means making music independently of a record label, which is not true of most of the bands referenced here), it just serves as a placeholder for that alternative, confessional, emotional songwriting we all recognize as being something. I mean it however The Killers mean it in their song “Indie Rock n’ Roll”.

July 27, 2015 17 Things Only Humans Will Understand
Recent Comments
0 | Leave a Comment
Browse Our Archives
get the latest from
Catholic
Sign up for our newsletter
POPULAR AT PATHEOS Catholic
1 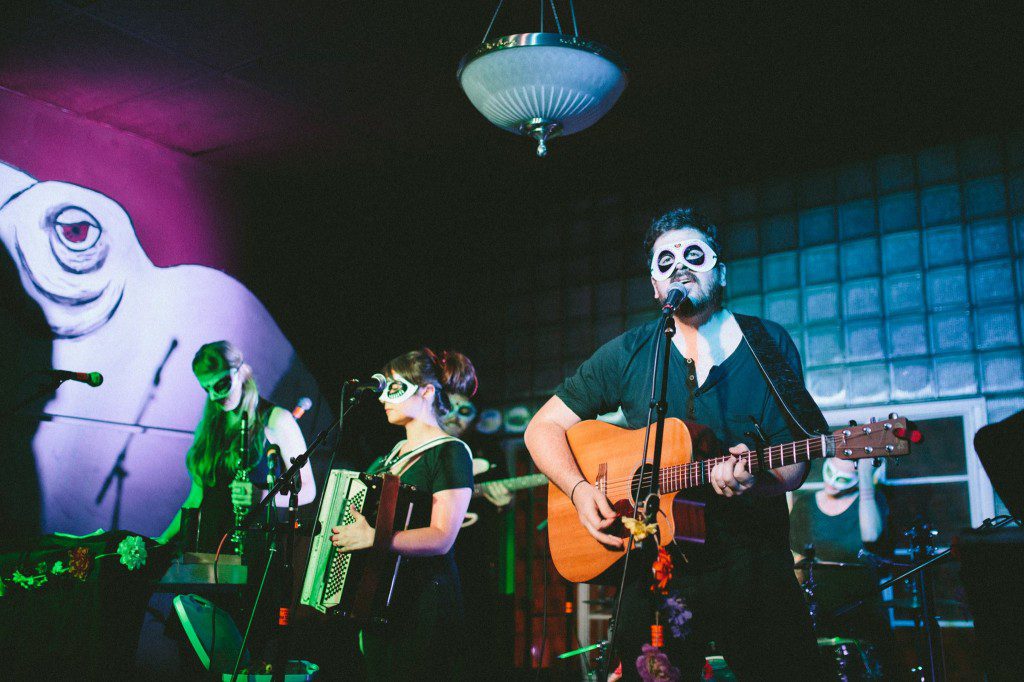 Catholic
A Sudden Encounter With The Collection
Bad Catholic