Pagan Children: Mine and my pathway

Pagan Children: Mine and my pathway May 31, 2017 Rachel Patterson

Pagan Children: Mine and my pathway

My children know what I am and I have never tried to hide anything from them.  There are altars about our home and I work magic in the house when they are around.  They have also attended open rituals with me but up until recently only as spectators because they were too young to be left at home alone!

I have also answered any questions they have had honestly and explained what I was doing and why.   But I have never forced my beliefs or practices on them or insisted that they follow my pathway.  I have always believed they will make their own choices when they are ready.

They have obviously been affected slightly by what I do, in fact out daughter was asked by my publisher to do all the drawings for the Gods & Goddesses colouring book (she was only 15 years old then).  Our son (aged 10 at the time) also helped by writing some of the chants for it too.

Our youngest has learnt all about Greek gods in school and been fascinated by the myths.  And of course the Norse god films have helped as well.

As a family, we celebrate Christmas in a fairly traditional way, not religious but with all the decorations, the food and the gifts.  But we also have a special meal on the winter solstice with a present each and I told the story of the Holly King and Oak King to them when they were both small.  My son definitely equates Santa with the Holly King…but then he also compares him to Odin and to the Terry Pratchett character, the Hogfather…

A few years ago I gave our daughter a small pouch with some crystals in to boost her confidence at school and she still carries it with her now.

Although he has always had a fascination for crystals and fossils, in the last couple of years our son has started to ask if he can create magical items.   He has a couple of medicine pouches hanging in his bedroom for protection and a witch bottle beside his bed that he made to ward against nightmares.    Some time ago he told me that he calls in animal spirits to protect him whilst he sleeps – which is not something I have ever taught him.

Then last month we had a Kitchen Witch open ritual and our youngest had to come along.  I expected him to do as before and sit on the side reading a book.   This time he asked if he could join in and he did just that.  He stood in circle beside me and he helped give out the items we used for the magical working.   When we created gratitude bags he stood with his eyes closed and charged the ingredients just like everyone else.   Afterwards he also told me that he spoke the words along with everyone else (the hail and welcomes etc.).

Last weekend whilst tidying his room he found a staff that had been gifted to him when he was very small and he announced, “I will bring this with me to the next ritual” …

Whether he will take his journey further forward I don’t know but it has been lovely to watch him delve into the mysteries and to enjoy what he is doing and learning about.

Will our eldest join the pagan journey too?  I suspect she may well follow in her father’s footsteps and be a disciple of music instead…and that’s perfectly OK too. 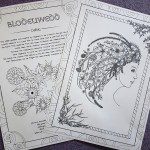 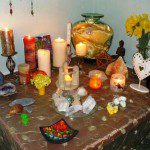 June 7, 2017 Best Get Out the Good China...and Magical Tools
Recent Comments
0 | Leave a Comment
Browse Our Archives
get the latest from
Beneath the Moon
Sign up for our newsletter
POPULAR AT PATHEOS Pagan
1

Cross and Crossroads: How to Spot...
Agora
Related posts from Beneath the Moon 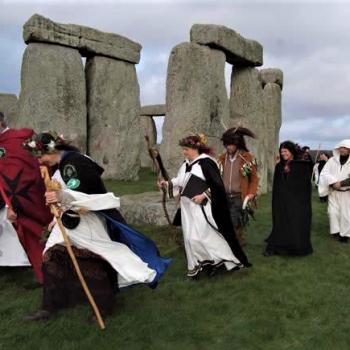 Pagan
Ritual wear: What do you wear and why?
Beneath the Moon 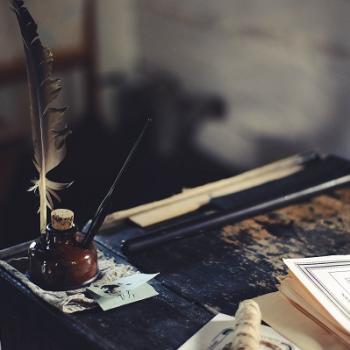 Pagan
Witchcraft: It takes work not to know everything
Beneath the Moon 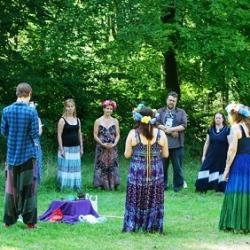 Pagan
Circle Casting: Thoughts From a Kitchen Witch
Beneath the Moon 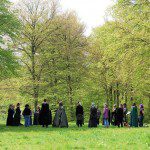 Pagan
Behind the scenes: An open ritual
Beneath the Moon
TRENDING AT PATHEOS Pagan