Where did the Sign of The Cross come from?

Where did the Sign of The Cross come from? February 20, 2012 Billy Kangas 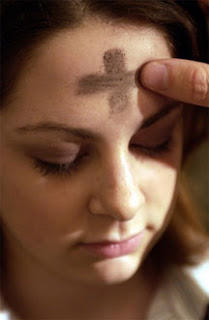 As Lent approaches I invite you to explore the cross with me!

Much of the reason that the cross has persisted as a the central symbol for the christian faith is the fact that it uniquely expresses outwardly the interior convictions of the communities of faith that have delivered the faith down through history. The cross points to theological themes like atonement, sacrifice, incarnation and laying down your life. It is a visceral reminder to Christians that the work of God in Christ was a tangible expression of love in a bloody tactile way.

Although the cross was not the preeminent symbol of faith in the early church[1], it was the subject of a great deal of thinking by those who sought to teach the faith. These pedagogical pioneers drew inspiration from Hebrew scriptures and the Greek translation of the scriptures known as the Septuagint. In these texts they saw the cross as a symbol that was prefigured in a number of different places.

One of the major texts that early fathers looked at was Ezekiel 9:4. This passage states that a mark will be placed on the heads of certain inhabitants of Jerusalem. This mark was the taw, and in the Hebrew of the day it was written like a multiplication (X) sign or a plus (+). This sign had already been established in the Jewish tradition as a sign employed in funerary functions. The Christians were quick to pick up on this, and they connected the sign in Ezekiel with the sign that Jesus speaks of in connection to the son of man in Matthew 24:30.

The Taw had two counterpoints in the Greek script, the Χ (Chi) and the Τ (Tau). These two had connections in the minds of many early believers. The Chi is the first letter in the word Χριστός which is the word for Christ. The Tau already had a history in the church as having significance as a symbol of victory known as a Tropaion. It didn’t take long for these cross symbols to make their way into the piety of the early Christians, and it was taught by both Tertullian,[2] Justin Martyr,[3] Origen and Jerome.[4]

One of the most influential thinkers in the Latin tradition was a man named Tertullian. He believed the apostles themselves were martyred because they were the very ones of whom Ezekiel spoke who had been sealed on their foreheads with the letter tau, which, he explained, was like the Latin “T.”[5] The cross was a symbol that one could point to as seen in not only Ezekiel 9:4 but also Exodus 12:22[6] where the Israelites apply a mark in blood over their doorposts to protect them from the Angel of death on the Night before they would leave slavery in Egypt in a Exodus passing through the Red Sea toward the promised land.

Another early christian thinker was a philosopher named Justin Martyr. He drew connections to the cross from all over the Hebrew scriptures.[7] He saw the cross in the form that Moses took as he held out his hands while the Israelites fought in Exodus chapter seventeen. He connected it to the blessing of Joseph in Deuteronomy[8] for he saw in the horn of the beast described[9] a picture of the cross. He saw the serpent of bronze raised up to save the Israelites[10] as a type and a sign that pointed to the cross as well. He sees the cross in the stance of the prophet Isaiah,[11] in the cry of dereliction from the psalmist[12] and wood of Noah’s ark.[13]

The symbol of the cross was not only seen in the writings of the past, but also in the worship life of the church at the time. The first place the cross had began to show up in the practices of the early church was connected to the practice of baptism. Baptism was seen as the place where you were marked with the cross. Just as the tau was placed on the heads of the Israelites in Ezekiel 9:4, so too the cross was placed as an invisible symbol on the heads of those who were united to the cross in baptism. The connection of baptism to the cross was first made by the Apostle Paul[14] and this theme was picked up and developed by many in the Early Church.

Ambrose of Milan, the fourth century bishop of Milan who became one of the original doctors of the church, connected the cross to baptism in such a way that he didn’t believe baptism was possible without the explicit connection. In his work De mysteriis he argues that the baptism is only consecrated as a result of the preaching of the cross. He compares the action of Moses casting the wood into the water in Exodus 15:25 to the declaration of the cross by the priest over the waters makes them “sweet for the purpose of grace.”[15] This was likely a reference to the making of the sign of the cross over the waters before a baptism as a form of exorcism.[16] Abrose also reflects on the role of the cross durring the second (of three) emissions. This immersion reflects on the work of the son and Ambrose sates that this action unites the baptised to the “sacrament of the cross.”[17]

Ephrem the Syrian, a fourth century hymnographer and theologian, also believed that the power of baptism was dependent on the power of the cross. He stated that you can not know forgiveness in the water of baptism unless it is built on the baptism of the the passion of Jesus Christ. Ephrem also described his own baptism as an act of bathing in the water that rushed out the side of Jesus[18] when his side was pierced with a lance.[19]

Augustine, arguably the most influential theologian in all of Christian history, pointed to the cross in baptism as a seal. He stated that since it was placed on the head of the baptised it should be the lense through which the life of the baptised is lived. This life hermeneutic of the cross should lead people to submit to the life and passion of Jesus. Augustine states that having the cross on your forehead means you have just as high of a call on your life to holiness as any priest or bishop.[20]

Augustine did not see the cross as a sign that was only symbolic in baptism. He also developed a number of metaphors in which the cross became the primary symbol. He saw the cross as a mousetrap where the death of Jesus so delighted the devil, the commander of death, that he was drawn into the trap and death’s power was lost.[21] A similar image is employed by Gregory of Nyssa where the cross becomes the bait, and the divinity of Christ is the hook that catches the devil.[22]

Augustine also read Matthew 5:15 allegorically, teaching that the lampstand that Jesus talked about that would not be hidden was the cross itself. The house that contained the lamp stand was the world, and the cross has the power to fill the whole world with light so that even those who killed Jesus would be able to become friends of God through the cross.[23]

Augustine also saw the cross as a chair upon which Jesus taught the world. On the cross He taught the thief beside him, the beloved disciple and His own mother. From the cross he sets an example for all Christians to learn by.[24] The cross in a sense become a cathedral from which Jesus most powerfully exercised his office as teacher.

The cross also becomes a Boat in Augustine’s thought. Although he acknowledges that philosophers are capable of knowing a great deal about God by observation of God’s creation, he believes they will never be able to reach God because of their pride. He says of them,

One final image of the cross employed by Augustine draws on a word play in Latin. In the story of Zacchaeus found in Luke 19:1-10 we learn of a tax collector so short that he needed to climb up a sycamore tree in order to see Jesus as he passed by one day. Jesus sees him in the tree and calls to him. Zacchaeus comes down, meets with Jesus, and is converted. Augustine exhorts all people to be humble like Zacchaeus and climb up the tree of the cross. Then Christ can pick His followers like fruit from the tree. All people must love the cross and fit it on their foreheads. The Latin word for the fruit of the sycamore is translated “silly figs”. Augustine calls all christians to be “silly figs” that are found on the cross of Christ.

The cross was truly a powerful symbol for many of the early Christians. In it they found a way to live and a powerful medium to express truth. Often times it was an easy image to grab, but few of the early Christians spent a great deal of time trying to figure out where exactly the cross fit into a robust soteriology. As the cross moved from a symbol of salvation to a means of salvation it revealed that there was a lot of theology that was still undefined.

February 22, 2012 Help Me Give Up Racism for Lent
Recent Comments
0 | Leave a Comment
"You can Order Best Birthday Gifts Online for your loved ones staying in India and ..."
emil katie I am so thankful for these ..."
"I am a professional guitarist, recording artist, and do concert ministry. One the comments on ..."
James Sundquist 8 Reasons Instruments Are Important to ..."
"Repentance has nothing to do with "Jesus" and everything to do with sin.https://uploads.disquscdn.c...https://youtu.be/h1UHarw109c"
The Imperial Cult Repent
""Moses" = fictional character = personal liability for "following orders.""Pharaoh" = real person = taking ..."
The Imperial Cult Fasting From Hurtful Words
Browse Our Archives
get the latest from
The Orant
Sign up for our newsletter
POPULAR AT PATHEOS Catholic
1

Your Choice: The Eucharist or the...
On the Catholic Beat
Related posts from The Orant

Catholic
The Suffering Savior is near me today.
The Orant

Catholic
Setting the Table for Jesus
The Orant

Cultivating the Virtue of Perseverance in Prayer
Fr. Matthew Schneider did a great job covering the recent case of...
view all Catholic blogs
What Are Your Thoughts?leave a comment
Copyright 2008-2020, Patheos. All rights reserved.