Teachings of the Early Church Fathers on Poverty & Wealth 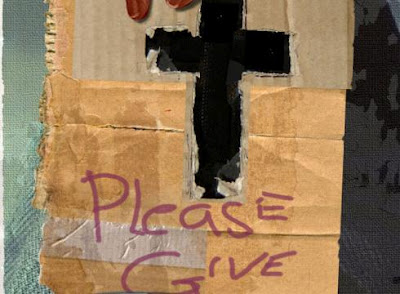 I got this compilation from Savas Zembillas. Thanks!
You are not making a gift of your possession to the poor person. You are handing over to him what is his.
Ambrose of Milan, 340-397.

The property of the wealthy holds them in chains . . . which shackle their courage and choke their faith and hamper their judgment and throttle their souls. They think of themselves as owners, whereas it is they rather who are owned: enslaved as they are to their own property, they are not the masters of their money but its slaves.
Cyprian, 300 A.D.

Not to enable the poor to share in our goods is to steal from them and deprive them of life. The goods we possess are not ours but theirs.
John Chrysostom, 347-407 AD

Instead of the tithes which the law commanded, the Lord said to divide everything we have with the poor. And he said to love not only our neighbors but also our enemies, and to be givers and sharers not only with the good but also to be liberal givers toward those who take away our possessions.

The rich are in possession of the goods of the poor, even if they have acquired them honestly or inherited them legally.
John Chrysostom, 347-407

Share everything with your brother. Do not say, “It is private property.” If you share what is everlasting, you should be that much more willing to share things which do not last.
The Didache

Let the strong take care of the weak; let the weak respect the strong. Let the rich man minister to the poor man; let the poor man give thanks to God that he gave him one through whom his need might be satisfied.
Clement of Rome, 1st Century

Christians love one another. They do not overlook the widow, and they save the orphan. The one who has ministers ungrudgingly to the one who does not have. When they see a stranger, they take him under their own roof and rejoice over him as a true brother, for they do not call themselves brothers according to the flesh but according to the soul.
Aristides, early 2nd century

When you are weary of praying and do not receive, consider how often you have heard a poor man calling, and have not listened to him.
John Chrysostom, 347-407

August 23, 2012
On the Development of Christian Doctrine
Next Post