5 Gals from Early Christian History You Should Get to Know

5 Gals from Early Christian History You Should Get to Know November 30, 2013 Zach Perkins

Last week we talked about “5 Guys from Early Christian History You Should Get to Know.” If early church fathers are off the radar for many Christians today, even more so are the early church mothers. The Church would be greatly enriched is this omission was remedied, after all most scholars today believe that the early church was filled with women who embraced the faith after encountering the message that they were of equal value and dignity (which was radical at the time and in many ways pioneered by the Christian Church). Zachary Perkins returns to  highlight five women in early church history who are honored as saints and considered models for our own lives.

Priscilla is often mentioned with her husband, Aquila in several places within the New Testament. Her role as a leader along with her husband was instrumental in building the early church. Aquila and her both were missionaries who lived and worked with Paul on his journeys. She’s also noted with her husband for instructing Apollos, an important evangelist in the Church.

It’s important to note the radical nature of her marriage to Aquila. She was not considered his property or even mentioned secondarily by other men, but she had direct influence and access to Paul and other apostles, as friends. This already tells us a lot about the structure of Christian marriage and relationships in the 1st century.

In Romans, Paul refers to Phoebe as a “presiding officer” over many. She’s also mentioned as a “deacon” (diakonos) and a “helper or protector of many” (prostatis). She’s the only woman in the New Testament that is called out specifically in this fashion. Little is known about her exact duties, but it’s clear that she was considered a leader and authority figure of some note. Some scholars even contend that she could be called the equivalent of a pastor or minister in part because of the terms Paul uses for her title.

What we do know is that Phoebe shepherded a lot of new Christians into the faith and was responsible for building the church in the region of Cenchreae and has been canonized as a saint in both the eastern and western traditions. 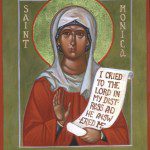 Mother of the great Saint Augustine of Hippo, she is spoken of very highly in Augustine’s Confessions. Monica was a devout Christian woman, married to a Roman official. Her husband was a pagan and a flagrant adulterer. Despite this, Monica had a fairly congenial relationship with her husband. They had three children together, Augustine, Navigius and Perpetua.

Monica raised her children in the Lord and in the town they lived, she was considered exemplary of patience and love. She lead many into the faith by her own example. Her husband wouldn’t let her baptize her children. This became a particular point of contention when a young Augustine became sick. She was going to have him baptized until Augustine got better and her husband withdrew her consent.

She stuck with Augustine, fervently praying for him to convert to Christianity. Augustine went off to become educated in Carthage and through that time he became a Manichean. She wasn’t particularly happy about this, but she eventually reconciled with her son. She followed Augustine to Milan, where he finally converted to Christianity after hearing St. Ambrose speak. Monica had the joy of seeing her son baptized and welcomed into the church. On their journey back into Africa, Monica fell ill and died. Augustine penned Confessions to help him deal with the grief of his mother, one of the greatest women he’d ever known.

Saint Catherine was a princess, born under the King Costus and Queen Sabinella of Alexandria. Being educated from a young age, Catherine received the finest education in arts, sciences and philosophy. She remained a virgin and declared that she’d only get married when she found a man who would surpass her. She soon found that man in Jesus Christ, when she saw a vision of the Virgin Mary in her teens, who introduced her to Christ in “mystical marriage”.

Not long after, she visited the Emperor Maxentius, who she tried to convince to convert to Christianity. The Emperor arranged for great philosophers, scholars and orators to dispute with her, but her great intellect proved to be greater. Maxentius wasn’t too fond of this, so he had her imprisoned and whipped. Many people came to visit her and almost all of them became Christian, even the emperor’s own wife. This made Maxentius even more furious, but he said if the princess would marry him, he’d stop. She refused, saying she was already married to Christ and would not betray him. Maxentius had her tortured and when she refused to break, he had her beheaded. St. Catherine was supposedly buried at Mt. Sinai, where a monastery in her name now stands. 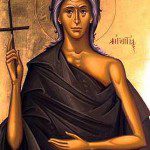 St. Mary was born in Egypt but then ran away to Alexandria at a young age, where she prostituted herself for seventeen years. She supplemented whatever money she didn’t make prostituting by begging and spinning flax.

Mary one day decided to go to Jerusalem in a sort of twisted fate with the intention of breaking the lusts of the pilgrims that had gathered there for the Great Feasts of the Exaltation of the Holy Cross. She had enough success to pay her way to Jerusalem, spending awhile there prostituting herself. Then one day, she tried to walk into the Church of the Holy Sepulchre, but in her memoirs she said some unseen force kept her from entering. She fell to her knees and realized that this was due to her sinfulness. Before an icon of the Virgin Mary she asked for forgiveness to God and promised to give up the world.

After this experience, she was then able to go back into the church and before the cross, she heard a voice telling her to cross the Jordan. She then went to the monastery of St. John the Baptist, next to the Jordan river. There, she received absolution for her past deeds and holy communion. After that, she retired to the desert to live as a hermit.

Later, St. Zosimas encountered her wandering naked in the desert. After asking him to provide her a cloth for warmth, she told him to meet her for Holy Communion by the Jordan. Zosimas brought the Holy Communion and Mary walked across the water to meet him. She told him to meet her there again for Lent the next year. There, he found her dead by the river. She had somehow died the night after he last served her communion, but her body remain preserved. He buried her nearby. Zosimas then recounted her story and wrote it down for future generations.
Zachary K. Perkins Freelance writer, blogger, full-time husband and father of three. Trying to navigate Christianity as a Millennial through the traditions of the Church. You can find him on Twitter or his blog.

December 2, 2013 How will you be joining the Pope in prayer on December 10th?
Recent Comments
0 | Leave a Comment
Browse Our Archives
get the latest updates from
The Orant
and the Patheos
Catholic
Channel
POPULAR AT PATHEOS Catholic
1

Abuse, the Rosary, and an Old-Fashioned...
Steel Magnificat
Related posts from The Orant