Sarah Palin’s Good Tidings and Great Joy (or how not to have an argument) December 23, 2013 Billy Kangas 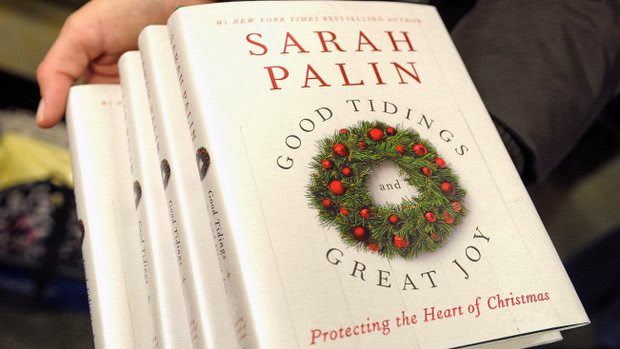 This week I read through Good Tidings and Great Joy the new Christmas book by Sarah Palin. I had recently gone after Palin in an article  for her critique of Pope Francis and had received some critique for basing my understanding of Palin off of media outlets and not her own words. When the opportunity to read her new book  arose I took it up. I was hoping to get a better picture of the women’s faith and tried to approach the book with an open mind. The book is an easy read filled with a lot of stories, many of which are beautiful memories of family Christmas traditions in Alaska. These parts of the book were enjoyable. Having spent some time in Alaska myself it has a special place in my heart. The book  also has a recipe for one of my favorite Alaskan specialties Salmon Dip, which was the first thing I turned to when I opened the book. I was all set and ready for a nice personal reflection of what Christ and Christmas meant for Palin…. but then things started to go down hill.

It turns out this book is mostly about attacking the “scrooges” who are trying to keep explicitly Christian language from having pride of place in civic life in this country. It offers another volley in the war on Christmas which seems aimed to make those already upset by the controversy surrounding keeping “Christ in Christmas.”

I don’t really want to get into the ins and outs of this argument right now. It’s a big topic which has been addressed well by others time and time again.

What I do want to highlight is how Palin goes about attacking the “scrooges” in Good Tidings and Great Joy. In all honesty the book really took me out of the “Heart of Christmas.” The book bothered me because it seemed to be intentionally aimed at making the reader upset and polarized and used childish tactics to do it. Here are the tactics that bothered me:

1. The Condescension – This book dripped with condescension. The book crafts these fictional characters that are intended to embody the kind of person who would critique public Christmas displays and the like. The depiction of these folks is filled with such condescending remarks that it’s painful to read.  It goes out of its way to find little details that conservatives can look down at. There is no charity in these depictions and no attempt as an accurate portrayal.

2. The Ad Hominem attacks – The Condescending depictions are then used to provide such a unappealing portrait of the “scrooges” that they are dismissed without the real issue ever being addressed. This is probably most clearly seen in the naming of one of her fictional characters “George McScrooge.”   McScrooge becomes the embodiment of the rest of the “Scrooges” and is dismissed. Other similar attacks and stories are made throughout. Palin digs up the most ridiculous examples she can find of “Scrooges” and believes that in dismissing these individual’s silliness she has in fact been able to overcome the more well reasoned arguments of others.

3. The Straw men – This book presented the argument of atheists and others who critique the promotion of  Christianity as a civil religion as nothing more than people who are angry because they are offended. She then dismisses them saying that she has more of a right than they do to be offended because of the ways she has been treated in the public eye. Although I am sure Palin has been on the receiving end of far more offensive attacks than almost any living american, that is inconsequential. Critics of civil Christmas displays attack them because they believe they are a violations of the constitution not because their feelings are hurt. By reducing the issue to a contest of who is more offended the book ignores the constitutional issue at the heart of the debate.

4. The appeal to unrelated experiences – This book feels emotionally manipulative. We are taken on a heartwarming journey through Palin’s personal life and Christmas traditions, but than there seems to be an underlying rhetorical move that these traditions are under attack because of “scrooges.” That’s simply not the case. There is no movement trying to keep you from cutting down Christmas trees, or exchanging gifts, or making food with your family for Christmas. I enjoyed hearing about her family life, but the way these stories were used to make an argument about saving Christmas made me uncomfortable. I wish I could have just had the stories without the scorn and rancor.

What I was hoping for in this book was personal and theological reflection on the incarnation of God in Jesus Christ, and some of that was there and it was fun to read. There were also cute pictures and recipes which were an unexpected bonus in the book! All of this was unfortunately overshadowed by the condescending assault on the straw-men “scrooges” which even turned the best parts of the book sour with their rhetorical aggression.

January 6, 2014 Making 2014 a Year of Prayer
Recent Comments
0 | Leave a Comment
"You can Order Best Birthday Gifts Online for your loved ones staying in India and ..."
emil katie I am so thankful for these ..."
"I am a professional guitarist, recording artist, and do concert ministry. One the comments on ..."
James Sundquist 8 Reasons Instruments Are Important to ..."
"Repentance has nothing to do with "Jesus" and everything to do with sin.https://uploads.disquscdn.c...https://youtu.be/h1UHarw109c"
The Imperial Cult Repent
""Moses" = fictional character = personal liability for "following orders.""Pharaoh" = real person = taking ..."
The Imperial Cult Fasting From Hurtful Words
Browse Our Archives
get the latest from
The Orant
Sign up for our newsletter
POPULAR AT PATHEOS Catholic
1

Your Choice: The Eucharist or the...
On the Catholic Beat
Related posts from The Orant

Catholic
The Suffering Savior is near me today.
The Orant

Catholic
Setting the Table for Jesus
The Orant